Not much to say this AM. Either they are ready or not. It's all in their hands. It truly is as simple as that. They control the data and the liquidity. If they want this thing at 1600 or 1700, they could peg it on the number at the close today either way. You must remember that you are dealing with a market that is literally 100% controlled and manipulated.

So, they crash it when they are ready, or my "event" takes control from them. Either way, I'm not sure they can hang on much longer for many obvious reasons. There is so much speculation, and there are so many scenarios that can play out here. It has been proven to front run the Fed on the short side is a portfolio killer. Their MO has been to draw in and set up the shorts for slaughter providing free fuel in the form of short covering to lift the markets. You need to be wary of that here. Conversely the bulltards need now be aware of the bull traps that will come.

It has also been noted that they can not let the markets correct or their ability to control a descent could be lost. True capitulation (everyone heading for the gates at the same time) will occur. They can not let the heard mentality switch to the sell side. If this thing is going down, or if any significant correction is going to occur it should be managed or walked down in an orderly fashion not to cause panic or fear. Well, that's what they would like at least.

Patience STB readers. Let the play come to you. Right now with the blue channel breakdown on my /es minis chart I am in full warning mode. I mentioned yesterday that the 1655 50dma level would be a great first target on a breakdown. I also like the 1600 level as a solid topping point for a larger reversal if that does not come here. I did not expect them to make that 1655 target in an hour though. What that demonstrates is the serious lack of support this market has.

It also demonstrates the volatility that I have been discussing for a few months now that you can expect as this top forms. Do not think that for one second they can't take this thing to a higher high at any moment. In 2007 the market rallied for a few months and set a new high AFTER the LEH disaster. The bulltards are stupid and greedy. they will get slaughtered. That said, if this ting falls to 1600, do not think that the game is over and new highs can't be set.

Talking top, It could be set and it may not be. This is no normal market. Past tops were easy calls with technicals matching the end of a QE session. This time the charts are, have been and will continue to be ready right now for a major reversal. The problem this time is Fed speak and the guessing game they have us playing with taper ON/OFF. My biggest fear as a bear is that they taper on, let it crash, create fear and then blackmail us again (remember TARP?) and then come back with an even larger QE package.

I'll continue as I have for the past few years. Remain cautious, follow the Fed and scalp long and short with the momo NOT challenging their intentions and thinking something MUST happen when in reality the only things that will happen are what they want. Now, one day their game will come to an end and that day is coming closer. Till then, regardless if I miss the top or not (I may have), I'll focus on getting the trade right, protect my ass and check my brain and ego every morning at the door cause they only get in the way.

Minis 4hr - Peach is gone. 50dma is support. This is the bears best chance since the last "taper ON" event. I warned if the blue channel support broke it would get nasty and it did. Maybe that nastiness is not over yet. This chart has a possible pink falling wedge. The pink support diag has been on my charts for weeks, but I did not think is was going to stop this fall. 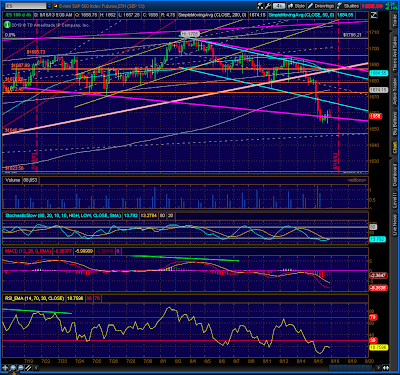 Minis daily - Chart is getting a bit busy again, but this is about as clean as I can get it. New possible pink rising channel is on the chart now. STB point right above near 1687. Another STB point possibility near 1625 in mid September. If this support and the 50dma crack then look to the red and green support near 1600, and it should happen quickly I would think. 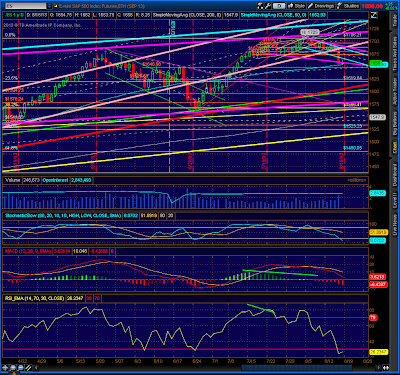 Minis 60m - The positive divergences that were there yesterday got abused. This ting looks weak on many fronts. You can see the STB point above here on the right where the lines converge at 1687. Not saying it's gonna happen and now it looks doubtful, but you never know with this crowd. 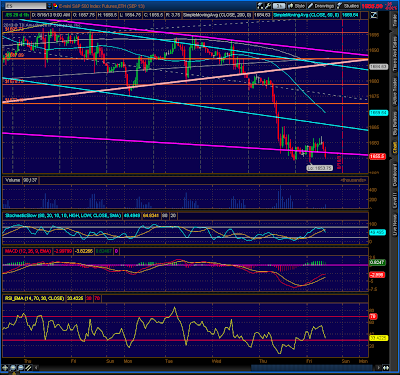 SPX Monthly - want to know where I think we are headed? See that green box? OBTW this chart is nasty and shows very clearly the manipulation and exactly where they too the REAL top, threw it under the bus and began their period of severe greed and control. 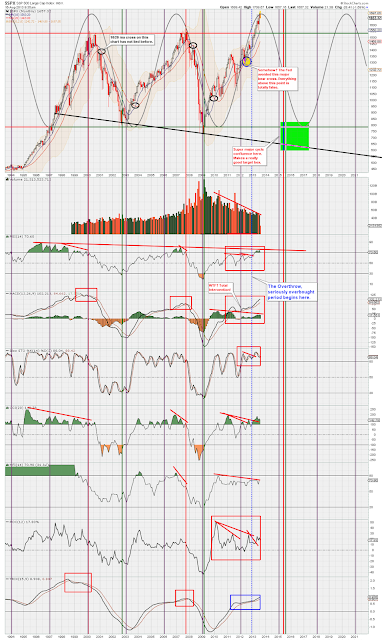 More to come below. Thanks for another sensational week on the blog to all the readers and commenters. Y'all really rock it.