Almost, kinda like JPM's half a year without a single red traiding day, the miracles of what can go on behind Wall Street's closed doors can truly be amazing. These miracles can astound and amaze especially in this economic environment. You need a CPI or PMI beat or miss? How bout an employment pop before an election? Or how about freezing the debt of the country for nearly three months to the penny!

The funny thing, and in the end, no one will have been able to see the collapse coming. When they have manipulated every data point for half a decade, pumped trillions into the "recovery", and when they have stripped trillions from the middle class and funneled that to the elite, every financial and economic genius will have missed the soon to be end result. Just like the housing and tech bubbles, these extraordinary events, just can't be forecasted.

September is coming. It's that fiscal cliff time of year again when the budget must be discussed at least to give the appearance they give a flip. Yes, it's almost that time of year when budgetary reality tries to bite, and they just paper over any shortcomings and move Forward. I'm really not sure why this circus even comes to town anymore. How many years now with trillion dollar deficits and no budget?

Last night the minis finally took out peach support. It should be game on now for the bears. I'm not sure if a backtest will be in order, but it is something you must have in mind. Taper on/off is still a bitch, and the bears must remain wary of Fed speak. Let's take a journey thru my minis chart -

Minis 4hr - For the direction we're supposedly heading that blue channel support is going to have to give away. If things go as they appear, that massive support less area to 1600 (red support diagonal) is about to get filled. Other than support at 1646 and 23 there is nothing to stop the slide. 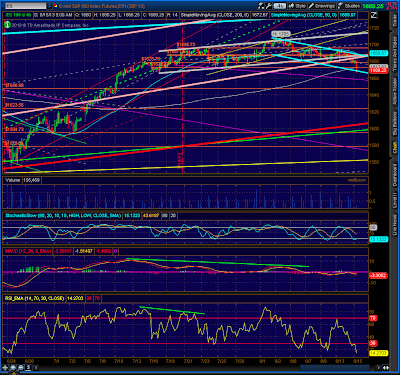 Minis daily - Backing things further out for your viewing pleasure. The 50dma is at 1655. That would be a good first target area for any breakdown and a point at which the bulls can still say they are in the game. Not pictured, but the 38% retracement off the November lows is all the way down at that first yellow diagonal (old rising wedge resistance) near 1566. That is something that must be considered as well if this ball gets to rolling downhill. Note: the apex of that old yellow rising wedge can happen in November or January depending on diagonal placement. I'll keep an eye on that as we roll along. Note the open gap below as well and the ultimate market support is the blue diagonal at the bottom. 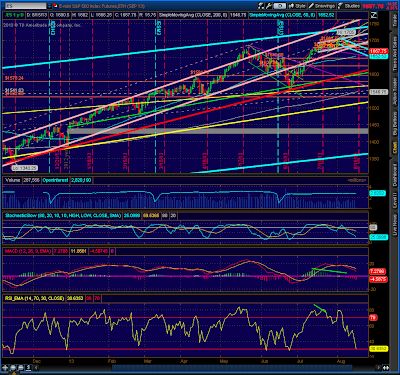 Minis 60m - The reason I am showing this chart is twofold. One, there is a possible HnS breakdown that targets the 1640 area. Two, as I have been showing for weeks, "they" don't take kindly to market reversals and have zapped back some of the steeper losses almost as fast as they were taken away. 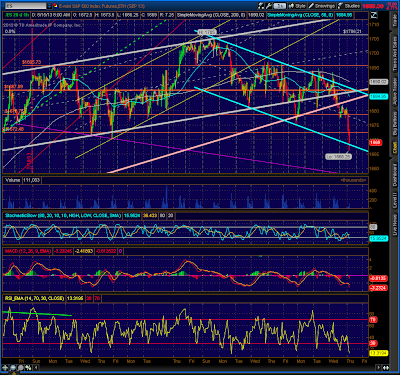 Minis 30m - Reversal of fortune? Funny, but for years it always appeared that some of the upper channel resistance diagonals would never be in play, but they always seemed to make it there with price. Now we have a seemingly impossible move to a lower channel support. This comes with a move thru MAJOR peach support after price consolidated. Trend change? 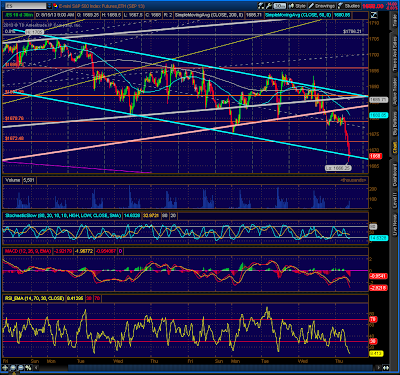 The rollover may be complete. The Fed may be throwing in the towel here well before Xmas and in line with the upcoming taper and budget debacle. Remember, CNBS has been telling you the taper was priced in and that all was well. Well, we'll see if that propaganda holds up or not.