Waiting game for the FOMC minutes Wednesday? All ears tuned to taper talk. There really is nothing else that matters at this point, cause the market manipulation can pretty much overcome most outside influence. MENA, Japan, EU, pick a crisis. Each crisis is one step from destroying the global economy and bring down the fractal financial farce.

Well, the 10 Year Bond Shakedown Continues: Rate Hits 2.873% which is causing quite the disturbance in  the Force. After all, when there is only one buyer left, that's the buyer of last resort and that buyer is thinking of tapering. Now where exactly does that leave us?

When comparing the Fed's stance and the ignorance of the sheeple, all I can think of is the scene from Blazing Saddles when Sheriff Bart first comes to town. It won't be long till we are all fooled by more blatant Fed fakery. Bernanke will hold a figurative gun to his/our head and we'll all wonder what can we do to help. Funny part is the best thing for us all would be for him to pull the trigger and put us all out of this misery. He wont.

The strangest part to all of this end game hoopla that's going down is why, at this critical time when everything seems to be finally unraveling, is potus meeting with all the regulatory heads about the implementation of Dodd-Frank? Sounds like a smoke screen or backtracking for events that have come and gone (not to our knowledge as they have all been covered up), and he's gonna need an "I tried" to stop this moment.

And the fact that gold is finally starting to rear its shiny head fits really well as a beacon of truth where the MSM and the most transparent administration ever leaves you wanting. Gold Lending Rates Drop Further On Supply Concerns
along with other tell tale events at JPM, in India, China and other nations are raising serious red flags that the system is truly unraveling.

SPX Daily - The 50dma is the key here. Can they hold this point or even generate some sort of reversal into the HOPE of a non-taper event with the FOMC minutes Wednesday? I think it would be safe to assume the answer will be leaked beforehand and we'll be able to tell via market movements what the Fed will be announcing. If they can't gold here then 1620 to 1580 will be in play and in a hurry. 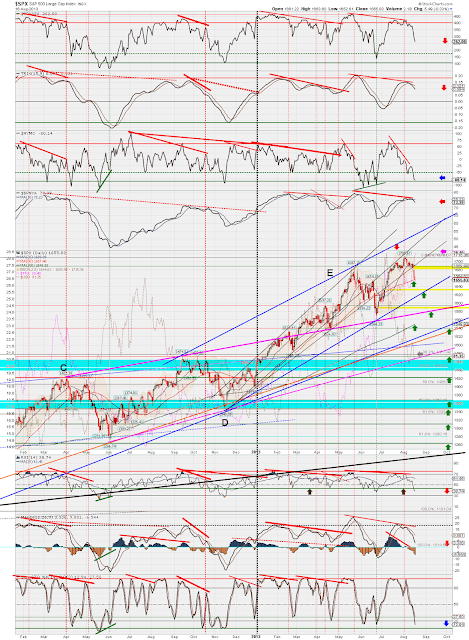 Minis 4hr - Form is breaking down here which is not good for those in control. Price is outside of several recent patterns and since its not discovering a new pattern at this time that is not the best sign for positive developments. Bully will like the chance of an underthrow of the falling pink wedge. Conversely the bears will like the breakdown of support and the fact that the wedge was not anywhere (2 inside points shy) near completion. The PPT did a masterful job last Friday containing the breakdown. If 1647 goes then 1620 to 1607 will be in the mix, and at that point we have to start looking further down as the 50dma will become resistance. 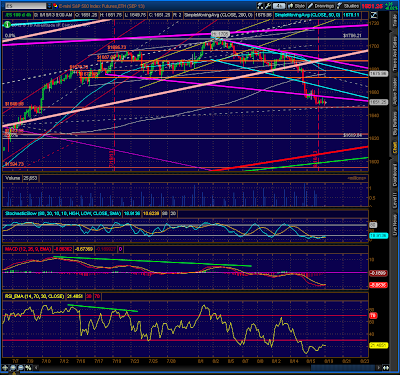 I think the market waits on the FOMC minutes Wednesday before making any serious moves. Of course their plans will be leaked and front running will occur, so look for it.