I'm kinda Fed up today with everything. It's been a long week. I don't think any of you need a rehashing of this week's multiple electronic "issues", further NSA revelations, more blatant data manipulation, taper On, bond yields exploding, Syria rising, escalating MENA unrest, Fukushima and many more topics all more dire and telling than the next.

At this point it's pretty obvious that they are setting up their end game scenarios to cover for the failed economic policies of the past few decades (especially the last 6 years). I'd say it would be a safe bet to expect a few more false flags around the globe (including domestic) in the near future. The tide is changing. Flow is getting ready to go OUT after a perpetual IN for so many years thanks to corruption and manipulation.

I've always asked which would come first, the crash or the war. They are running neck and neck right now. I've pretty much always speculated the crash would lead the war. I'm not sure it really matters at this point since both are virtually guaranteed and the outcome of both is fairly obvious. Get ready folks, we're heading downhill fast right now.

Minis 60m - Pretty simple, yesterday I said above 1652 and bully will have the ball back. Well that area is holding keeping us all guessing. I still really would like to see the lower red (not pictured) major support line hit before we get into any sort of reversal. That is near 1613 now. Maybe enough is enough and they pop it some from here. If so, I'll throw out some targets. There may be a larger blue channel down here, but I still contend the market is formless and confused which I've been speaking of for a while now. The actions surrounding the NAS closure and GS trades indicate to me that my readings were pretty much spot on. 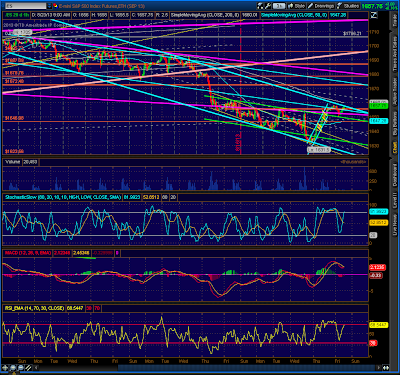 The weekly Pele Report says, "it is a very important and powerful time for change and the aspects for this weekend are phenomenal." We have a grand cross formation this weekend. Those of you that have been following Tom know that he's been very spot on with his readings. Take a look at this. At 11:50 he zigs and goes with love and such and new paradigm when he should stay the course with tradition. Listen and be blown away.

More to come below. Thanks to everyone for a really awesome week in the commentary section. Y'all have rocked it and are all contributing with some incredible spot on information.