Since the taper is coming I thought I would let you (on your own) do some simple math based on the below two quotes from ZH,

"So, thanks to the US Treasury, we know that between January 2009 and April 2013, on days in which the Fed POMO was more than $5 billion, the stock market rose a total of 570 points, on days in which the POMO was less than $5 billion, the cumulative stock market gain was "only" 141 points, and when there was no POMO, the S&P gained... -51 points." from US Treasury Finally Admits The Truth: It's All POMO

"Simply put, the higher margin debt levels rise, the more fragile the underlying basis on which prices trade; with even a less severe sell-off in equities capable of triggering a collapse." from Deutsche Bank Hopes "Not All Margin Calls Come At Once In Case Of A Sell-Off"

Minis 60m - Now let's look at the cliff the minis sit on with the potential STB point just in front (where 1687, white, peach and blue diags converge). 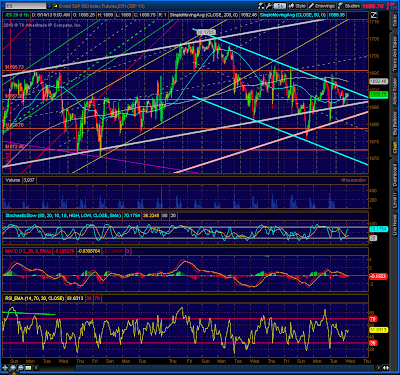 More to come below. Could be a dull two days ahead, but if things work out right late Thursday or Friday could bring some fireworks if the Fed allows it.