Welcome March folks, the month I have been dreading for quite some time.

I don't have much to say as "they" have proven once again it is nearly impossible to speculate or gauge their agenda. The sequestration roller coaster ride continues. Funny to see the entitled state react to the potential loss of what amounts to a month of QE.

OK, here is the bottom line - we're doomed either way, so just spend the money, don't make cuts and if the ship is gonna sink let's go down blowing it out. No reason to piss everyone off at this point. Seriously, as noted here and in many other places, there is no hope or remedy to the debt crisis. The MBS/CDS sham will eventually collapse taking everyone down with it.

Do the math, this country makes steals $2 trillion a year in income, spends $3 trillion a year, has roughly $17 trillion in debt and over $120 trillion in unfunded liabilities. It is game over no matter how you look at it, so why not blow it out? Hell, that's what the Fed is doing with the markets, why the hell should the sheeple have to suffer?

We're just gonna have to deal with their BS. There is no other option. Try to follow this crap in the media. You can't. It's impossible. One side lies thru their teeth and threatens reporters and the other got neutered and is basically powerless. I expect to see Boner to be the next Bob Dole viagra salesman. He's definitely got some issues.  It is hardly worth your time or mine to discuss this when in the end we all know they won't cut a damn thing, and if they do it will be some bullshit like we got now left over from the super congress that will be pushed out yet again to 2050.

How do you invest or trade this mess? As I have said for about two years now, you scalp and run, long or short gangsta style. First we had sequester fear mongering, you know, we're gonna lose 130 million jobs (market down), then more fear mongering (market further down), then we had the how do we get around it (market bump up), then we had it won't happen (market way up) and now we're back to the start (market fading).

Bottom line - what's gonna happen? The same damn thing that always happens, an 11th hour acquittal, more spending, no cuts and an elated market that can't stop before it hits all time highs. You think something like these paltry spending cuts is gonna get in the way of the greedy bastards running the show on Wall Street from taking this market to all time highs? Has anything stopped the greed since the late 80's? Nope. Greed controls all.

Monthly Index Comparison - Inc mentioned this chart in the comments last night. You all know how I love the "bunch" as a turnaround indicator. Ya think the boat is lopsided and everyone is on the same side of the trade? Here is your proof. Does this look normal to you? 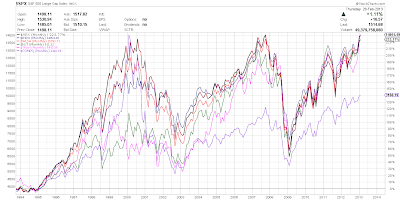 SPX in Gold and Silver - Dig this chart - I used to show this quite often and have not brought it out in a year or so. This is possibly the most telling and brutal chart I have in the chartbook. Coming implosion? Coming total market capitulation? No doubt. This is insanity!

Minis 60m - Price crossed the 61% retracement at 1511, entered the bears danger zone, ran up to just under the prior high and is now peeling back again. There are 4 large resistance points in the 1520 area and they have apparently held for now giving he bears new life yet again. Price is back thru support at 1510 and had broken the yellow diagonal support of the most recent rise. 98 and 91 will be the first two stops if they can continue this run. If sequestration becomes a reality the PPT will have to wait to pick its point cause nothing will stop the slide for some time. 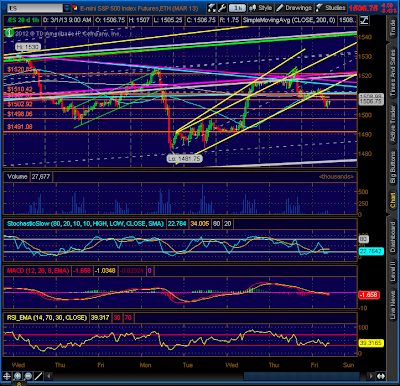 Minis 15m - A closer look at what lies ahead both above and below. LT s/r at 03 has price here. 98 and 91 lie below and then the white channel support near 77 just under the prior low of 81. This does not look good for bully and will require yet another 11th hour "miracle" from congress to avoid a major tumble here. 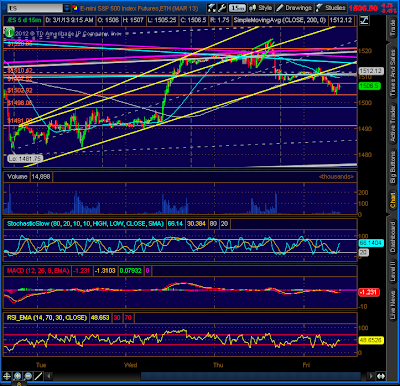