To those in Cyprus it must be comforting to know that after your government imposed austerity and raised taxes to beyond comfortable levels, the EU still has the goodness of heart to come directly after your bank account. It's down right kind of the EU to allow your government the opportunity to vote on the process first. I mean, it's not like this is some sort of socialist maneuver or central bank controlled theft.

This is one for all and all for one and you good folks get the chance to be the first in the EU to show your true patriotic spirit. No, no, no this is not some forced layaway plan being imposed on you to buy your country back from some fictitious entity that only exists on paper and in the minds of the elite. It's like, your obligation to pay for all of this mess anyway. What? Do you think the unregulated financial system that rehypothecated your deposits in London over and over and over again is to blame for any of this? Balderdash!

So, before you go to the bank and take all your money out (which is impossible now cause they have frozen everything - they did this to protect you from making irrational bad decisions that could harm your well being), before you take those funds and start diversifying into everything other than currency, remember your patriotic duty to you country and to the EU. Remember that all of this is happening so your children can have a better future. Remember that all of this is happening because it was your doing and not the governments horrific overspending and dealings with central bankers around the globe.

OK, I told you all I had a future as a propagandist writer for the system. Maybe this talent will save me from my certain future in a FEMA camp and reconditioning program. I really should write for CNBS. It's easy, just be as sarcastic as possible and throw in whatever statistics you want to make your story look good and wham-o!  you're pumping out headlines that the sheeple will take hook line and sinker.

On to the real stuff -

I will say that STB, its wonderful core commenters and like blogs have been vindicated for the past several years of moaning and groaning. We're all very sadly right on track. Guns? Wonder why they want 'em? Wonder why the DHS has purchased over two billion rounds, 7,000 ARs and over 2,700 armored vehicles all for domestic use? They will come after your deposits one day as well, but unlike the good people of Cyprus our government is going to just take it all without a vote.

I'm telling ya,  the $19 Trillion in retirement savings will be confiscated. It is possible they will not stop there and just take everything that's in the banks. That is their only out now. they know it, and I believe they have planned on it all along. That is the prize and they will come after it. When not if folks, that is the only question that's left. One world government comes eventually (after the great war). The world and this once great country as we know them are now gone forever. Enjoy the twilight while it lasts. To those with children, start educating them now.

It is too early to speculate, and you know me, I hate to jump to conclusions. At this time I think the propagandist story line will go something like, tiny insignificant country, no big deal, they did bad things, contract, its legal, obligation, duty, not significant, will not effect you and the MSM will bury it.

I assume that instead of money leaving the EU for other places it should start looking more like a flood. This I am assuming will bolster many things here which could include treasuries and the markets. Of course this all this accomplishes is leading more sheep in for slaughter. It wasn't bad enough that our unregulated financial markets caused all of this to begin with, they have to end it all as well and they are going to take the whole global financial system down with them (think CDS and bankster greed). There has never been a better time to start reallocating into primary metals than now regardless the cost.

STB Catalyst? One that hits which leads to them losing all control - on a scale from 1-5 (5 highest) - this is a 3.5 with potential to escalate to a 5. The question is how tolerant (yes, I believe these good folks have been tolerant despite the riots) the good people of the EU will remain. It's game over, but no one will admit it. The governments are spending now simply to maintain peace.

Minis 4hr - 8 point gap above which is to be expected. Gaps do get left (like the one near 90 on the VIX (yes, there is a nice gap there). I'm still not convinced this is the top yet. I don't trust 'em as far as I can throw 'em. However, this could be the catalyst we've all been waiting for. If it isn't I have no clue what it will take. No need for an SPX chart today. Let's just watch the flow and see how Potter and the PPT handle this. Minis key support is in the 20 area. I'll go a lot deeper into the charts below. 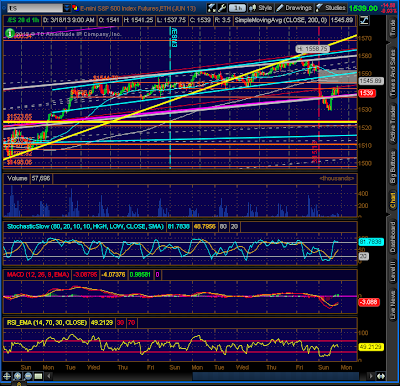 As usual, much more to come below in the comments.