Are the Cypriserfs the fools this day? I don't think that is fair to say. They are unwilling participants, thus no blame or scorn can be thrown their way. Not one iota. All the STB readers know exactly who I think the real fools are. There are none greater than the citizens of the USSA. The suckers that have elected and supported the politicians that have allowed this crisis to continue. The same politicians that support special interest groups over the citizens they should be serving.

The sheeple that have taken every penny in credit the banks have offered and spent like there is no tomorrow or consequences. The sheeple that allow the Fed to spend the taxes of current and future generations to support a spending and debt addition that will one day destroy this nation and the world's reserve currency. The same ones that allow close to half of the monthly POMO to be sent abroad to support foreign banks. We are the fools this day.

We are the fools that sit idly by with the Cypriserfs and others to come that allow the crooked and corrupt capitalists to steal everything we have worked so hard to achieve. We are the fools that are so self absorbed, so passive, so indifferent, so ignorant, so unbelievably arrogant. It just pisses me off to no end to see us throw it all away. All so we can live comfortably now not acknowledging the consequences of our current actions and lack of any moral or ethical compass. Sadly, we are the fools.

Everyone on the globe has now been set up to be a perpetual debt serf. The real theft is just now beginning and the Cypriserfs are the first to allow it (sans the PPG, O-MFG and LIBOR thefts) to go down without a fight. The template is set. The path is set. The rich and privileged get out first and the rest have their wealth plundered in order to save the financial system. Who's next? I don't know, but more theft is coming and coming soon. You know the sad part, there is no way out. They can pay this lot off with the spoils of the savers, but what happens when the savers have nothing left to steal? The debt will not just end unless as STB called years ago at the beginning of the blog there is massive global default aside the "event" that rips control of the system from the Fed.

So we are the fools. This can not be disputed. On this day think of yourself, your idle indifference, your complacency, your lethargic passive manner that concedes everything to the elite without lifting one finger. Now ask yourself if you have the fortitude to turn this tide? Will you defend your rights, your liberty or your dignity? You better find the answer to this question. They are taking over from bottom to top. They are just beginning their rape of the lower class.

Don't for one second think you are one of them or that this can't happen to you. As I have warned for years as well, the $19 trillion in retirement savings is their goal, and they will take it all and distribute it as they see fit. Don't think there are not any deposit restrictions in the USSA? Go try and withdraw any amount over $5,000 today and see what happens. You won't get it today. You can have it next week. They don't have it.

Wake up fool. They are on the march to their final conquest.

I have shown many charts lately that a;; point to the end. Now it is just a matter of time. How long can the fed hold out? Who knows. the markets are not real. Everything is a lie now. We've reached the end and one day, as all lies do, this will end. I preached follow the Fed for over a year, and I have switched to preaching patience now, for that is all there is left. Here are a couple of charts I showed in the weekend commentary I think you need to see.

RUT Weekly - Yet another overthrow situation. 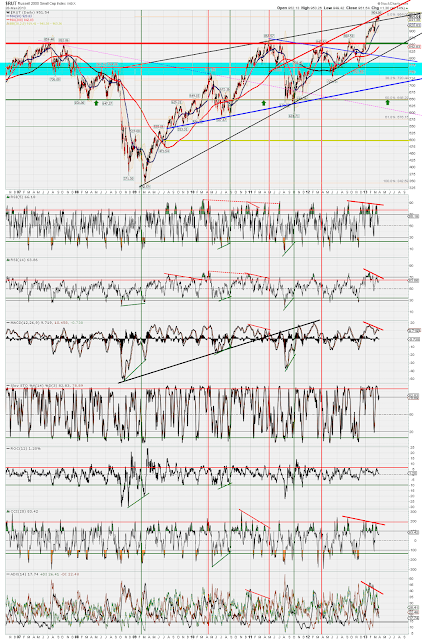 SPX Monthly Cycle - Just note the tarhet box I've been pointing to for over a year now. 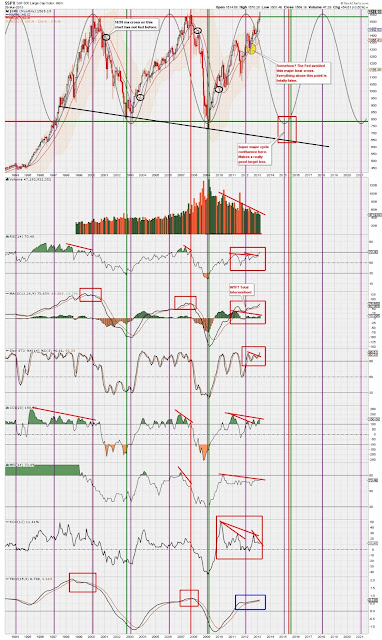 SPX NT Cycle - For those looking for a near term pullback target - if such a thing is possible at this point. 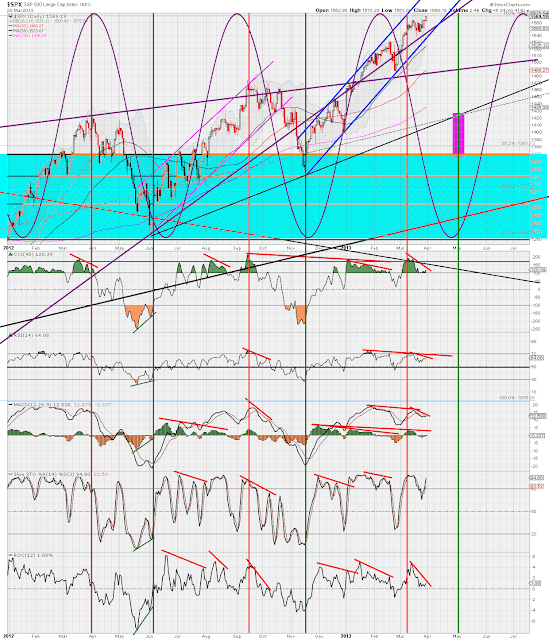 I think we may have to wait till the next round of blatant depository theft to get the crash, cause the next time they try it, I don't think it will be taken as tolerantly as it was this time. Deposits are about to flee the banks and they are about to find out they need us more than we need them.

As usual, more to come below. I am in the land of Corexit, so you know what that may bring if history holds. I'll be in and out this week, so y'all hold down the fort.