OK, so today we have the Obummer in Israel, FOMC and more rumors from the Cyprisurfs. Let's knock out the FOMC notes first - rinse/repeat, ZIRP and QEternity. Got that? Good. Obummer, who really cares to hear his BS anymore? On to Cyprus.

This thing's getting a bit confusing with so many potential angles. The Cyprisurfs have till the beginning of June to get this worked out, so time is available. Let's think about this, a Russian naval base in an EU country? Don't think so. How about the Russian's owning all the mineral rights under their dirt? Sure, if you want to just give away the farm (even Greece avoided this - so far). Russian depositors (probably mostly mafia) getting their accounts whacked? Uh, who's gonna get whacked? All I know is that there is a lot to do with Russia in this potential solution. Hey, great, now they're exporting debt laden countries to our enemies. Brilliant! Does China get Italy and Spain? Portugal to Iran?

Bottom line is you know they will find a solution to this mess. They always do (till they don't). Someone (American taxpayer) will write yet another big check to keep the farce alive. The problem this time is they have crossed the line and caused irreparable damage by going directly after the cash of the Cyprisurfs. This will bleed over to the rest of the EU countries. They may get their bailouts but the faith in the banks is now gone, and this they will never restore. Bank runs, holidays and capital controls will be the new norm. Me thinks the banks are about to find out that they need us more than we need them.

I don't know how this is gonna work out, but I believe the STB catalyst has arrived that will lead to the "event". I do not see how they will be able to get around this one. The banksters are at the end of their rope. The math has finally caught up to them. Bank runs across the EU are coming. Capital controls will only be able to slow the bleeding. The bank runs will spread across the EU and then the globe. Without these deposits, they are screwed. This should finally bring their system down.

Yesterday I mentioned the "IMF Riot" theory (well, it's actually in IMF documents so it is not a theory), this is where the banks want to create massive social unrest in countries after looting all the cash and valuable assets, and then come in and buy up everything at bargain basement prices. You need to remember this and think carefully about it. Think about where we're headed and why?

Remain patient traders. The SPX all time high is still above, and so is the 1566 triangle target. I think they have till tomorrow morning to get it or possibly Monday if they keep the Cyprus banks closed. Once those banks reopen, I think that is when the proverbial poop hits the fan. Reality is about to come down across the EU like a sledgehammer. The ECB, IMF and the Fed can't go any further and they know that. The only word that comes to mind is Kaput.

SPX Daily - I told you they were only making the negative divergences even worse with that last run. Let them set their bull trap. You just need to remain patient, set your trades and be ready (as always) for the unexpected just in case. Never forget that they 100% control this market. 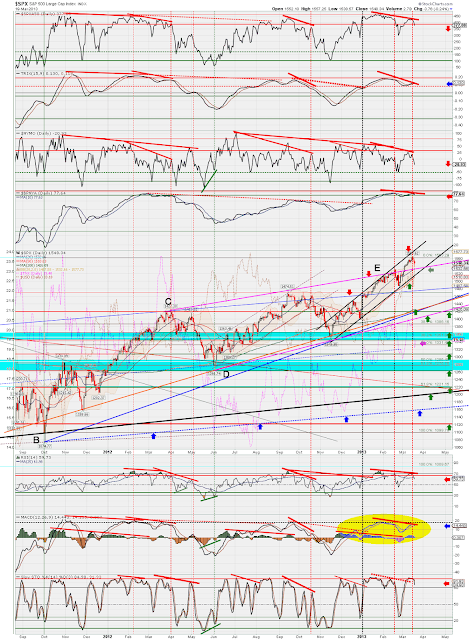 Minis 30m - So much for that pink channel down idea as they took out upper channel resistance last night. They now sit eight measly points from a higher high - with the Cyprus backdrop! LOL is all you can do at this point. Patience my friends. We all know all of the charts are right where we want them. 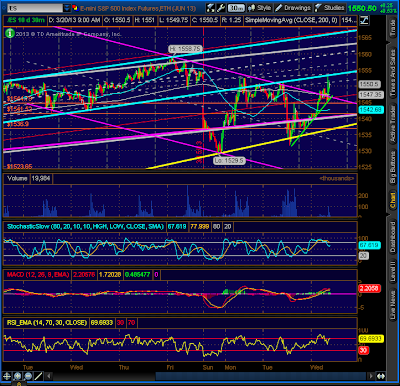 I think the odds are good that I will finally call a top when the Cyprus banks reopen. I may not nail it, but it will be close enough. I still have great fear of the Fed and a possible asset run to the dollar and our markets. This is the only thing holding me back right now. Gold and silver - just buy 'em. No need for discussing that anymore. Physical of course, not paper.

As usual, more to come below. If you just read the posts you are missing out on the meal. The comments section below (over 250 of them yesterday) is chocked full of great info you should know, so don't ignore it.