I don't have anything new to bitch about this morning that you have not heard multiple times over the past several years, so let's just look at some chart stuff.

Have you ever heard of a triple top reversal formation? Let's look at this example from Stockcharts.com. 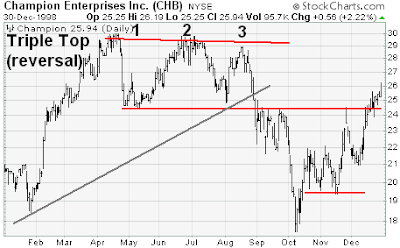 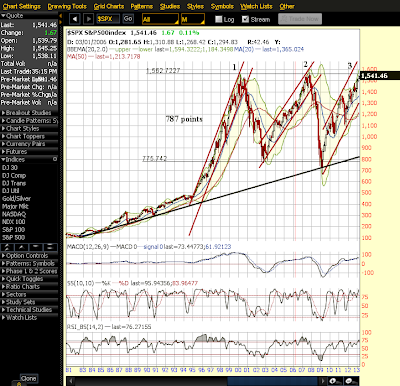 See anything familiar? The chart of the SPX is actually even more textbook than the one SC is offering.

Now let's observe the qualifications that SC has given for the triple top and see just how this current scenario fits:

1) Existing trend to reverse - check.
2) Three highs, well spaced that mark clear turning points - check (if this top cooperates)
3) Declining volume - check
4) Support has not been busted yet - we got a ways to go before that happens.
5) Price target is the distance from the support point to the highs, in this case support point is 775 and the distance from there to the 1562 high is 778 point giving us a price target of (12).

So, based on everything technically being told to us a price target of NEGATIVE 12 pretty well fits all the surrounding scenarios we're facing. Let's review a few of the current issues facing the markets today - let's not - we all know that without $85 billion a month in QE4eva this thing is toast so let's not waste my time and yours reviewing the facts.

OK, I'll cover one issue - Government income - $2 trillion - Unfunded Liabilities - $120 Trillion plus. You do the math and tell me if that target is unwarranted or not.  We did not see true market capitulation in the crash of '08 (everyone selling and running for the gates at the same time). This time will be different and it will be worse than any crash in history when it gets rolling.

For years I have cautioned daily to simply follow the Fed. It was easy thru QE's 1 and 2 where they actually tried to stop easing, but we all know what happened then. So now they can't stop easing. Today I war to simply look for the catalyst which will lead to the event I predicted years ago that it would take to end this farce.

The markets are totally 110% manipulated. From the go go Clinton days and the ouster of Brooksley Borne (actually from the founding of the Fed in 1913 or the  the assassination of JFK - who was the last president to try and end the Fed - but let's not go there) to today, the totally unregulated Quadrillion CDS market had led a charge of greed.

Its a game the big boys play seeing who can pile up the most chips, damn the consequences to the nation, its citizens or the globe for that matter. No one is going to get in the way of this freight train, cause they will get killed (literally) if they do. The corruption throughout the system has never been worse, and just like history has taught us, it will end and in a horrific manner one day.

All we can do now is wait for the end, and when that "event" happens you better be prepared.

More charts and stuff to come below.