Well, I got my catalyst. Now all we need to do is let this thing play out. Remember after the Bear Sterns (or BS) announcement it took some time and another 150 up SPX points to finally get this thing to roll over. I still have a funny feeling that the CB's are not speaking zee truths about the real underlying issues  (think CDS defaults) that will come with the tumbling of each domino.

You don't need a rehash of what's about to happen but let's walk thru a simplified STB version anyway. Banks open, bank run, no money, people pissed, buildings burn, runs spread to other countries, no money, people pissed, buildings burn and so forth. I do believe that it will not be long till the banksters and politicians will face real personal threats. Instead of people burning themselves on the doorsteps of government buildings and banks, they may start burning banksters and politicians for the crimes they have committed. They may be too big to jail, but not too big for vengeance.

Global markets currently supported by the future tax liabilities of the American taxpayer (and soon to be funded by the soon to be confiscated $19 trillion in retirement assets of the American workers) courtesy of the Fed will remain resilient to the dismay of the few realists left out there until the first CDS goes down. Then true capitulation occurs as the banks finally turn on themselves. Everyone runs for the gates at the same time. STB has long predicted at least two market closures - it could be worse - a lot worse.

At some point in this scenario a war will be started. N. Korea, Iran, Syria - it will have to be a major confrontation. Now, this war's sole purpose will be to distract the citizens from the financial collapse. This will possibly be a coordinated event between the big three as they look to divvy up the globe while not totally destroying it at the same time. I suspect a nuke or two will be used to get some serious fear mongering going. There will be no one world government. You can forget that. I think China and Russia divide up their continent and we get the Americas.

(On a side note - I also contend that there is a chance they will finally admit that there is life out there other than ours. Yes, there is a possibility of disclosure. Sorry, I am a believer. Again, looking for major distractions to the financial crisis. Anything to get our minds off the loss (theft actually) of wealth and the social unrest that has ensued.)

Dire? Well, when the global banking system backed by quadrillions in CDS, funded by fiat and with no real collateral crumbles, it gets ugly. The hard part will be controlling social unrest. They can't can they? When we finally get pissed off enough police in riot shields won't cut it. The National Guard may be able to protect a few areas but not much.

Food, water filters, solar powered generators, guns, ammo, gold, silver, fuel, tractors, fertilizer, salt - these will be the important items not your savings in the future. Get ready folks. It's coming.

Since we're diving off into the deep end today, let's bring op one last subject that STB likes to hit on periodically. This is the toughest and farthest to fathom, eugenics. Now stick with me here. If you ran a government that could not possibly afford to feed, house and take care of a majority of its citizens. If there never will be enough jobs to keep everyone employed. If the cost to subsidize the lives of these people would never be affordable - what would be the best way to solve the problem? Elimination.

A virus that wipes out say half of the country would do just the trick wouldn't it? Cut the population in half and all of a sudden we're back to the good 'ol days aren't we? All of a sudden everyone is working, there is plenty of food and shelter. Those that are left will be the fittest and strongest. Orwellian, I know, and I only ask that you contemplate this as a possibility. This is not some wacky STB nightmare. This is one that they have documented in more than one instance. In other words, it is in their playbook if needed. Want proof? Just Google Agenda 21.  It's real. I'm not kidding. Would you put it past them? Especially this president?

SPX Weekly - just follow the black lines. I told you coming into March my spidy sense was really tingling and that April is a preferred moth for major tops. Overthrowing the E touch of a multi year rising wedge with price supported solely by Fed intervention and a crumbling economy is not a good scenario. As for the rest of the charts, you've seen 'em all over the past couple of months. The time to bug out is close. Hope your bags are packed.

Minis 60m - Triple support at the backtest of busted pink resistance. If yellow support goes, there may be no top and no turning back. 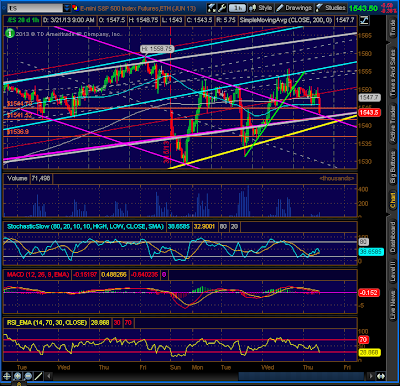 As usual, more charts and commentary to come below.

Don't forget to get your picks in for the STB NCAA Challenge - You have till noon I think.