We all know we're back in bubble territory. Well, the ones that are awake and don't buy into the CNBS pump and those not on the entitlement bandwagon headed straight off the cliff. We've seen this euphoria at these levels before haven't we? Twice recently we've witnessed the results of irrational exuberance?

In order to avoid describing this bubble in detail let's simplify it. Debt and corruption, those two words concisely cover the current situation. Are there any worse two words you could combine? Not really.

You all know the story from QE1 to QE4eva. You all know the lies of the BLS and the propaganda of the government controlled MSM. You all see the $120 trillion in unfunded liabilities. You see the "stimulus" delivered via new avenues of debt via student loans and disability. You also see how unsustainable this Keynesian nightmare is. So does the government.

The DHS purchases of over 2,700 armed vehicles combined with over 2 billion rounds of ammunition should tell you they know what's coming. Their opening and staffing of multiple FEMA camps should give you a clue as well. When they hire "recondition" specialists, what does that tell you? The attempted destruction of the 2nd Amendment (and the rest of the constitution) should be another clue.

So what do we do investment wise at this point? STB has for well over a year recommended a hit and run, long or short scalp strategy. You have to separate reality from fiction. Reality is the above mentioned debt bubble and the coming collapse. Fiction is anything associated with the 100% controlled and manipulated markets that Greenspan just noted was the most important thin of all right now.

You have to check your brain at the office door every morning, dispose of all traditional market theory, delete all the charts and enter the world the Fed and robot HFT trading algos have created. It is a world of fantasy where nothing is real other then what the Fed wants you to perceive.

What will it take to end this? Who knows? With the retail investor out and insider selling peaking all that will be left will be the banks and hedge funds to wipe each other out. Can the end happen if they are as coordinated as it appears? I do know that it will end one day, and this time true market capitulation will be experienced.

As most know, I await the exogenous or external "event" that will rip control from the Fed and the crony capitalists. It appears that they are willing to spend till the music stops. Based on DHS purchases, FEMA camp staffing and other factors it appears "they" are not quite ready yet for the coming social unrest that will accompany this next downturn.

If that is the case shorting is not the thing to do quite yet and it may be to early to take profits with $85 billion per month forever coming from the Fed. It is definitely not to early to start protecting or hedging any long positions. It is gonna be a crap shoot, but I believe we'll see the "event" or the catalyst that will start the dominoes falling.

Remain patient. Don't worry about being the first in line or missing that first one or two percent of the fall. It is far more important to get the trade right and not get caught in yet another bear trap or short squeeze situation. A bull trap is coming. Heck, this whole run off the crisis lows is one big bull trap.

The current overbought situation is an extreme example of this. The market is ready to turn, but can the Fed let it? Can the Fed allow any sort of selling momo to take place and still control it? Could Potter and the PPT provide enough ammo to stop the follow thru of the next flash crash? Can the banksters, hedge funds and Wall St. control their machines when the selling truly starts? I don't think so.

I have not called a top yet, but I may soon. Right or wrong it will not matter much beyond this point, cause when the turn comes it will be a supportless violent move south. When this thing let's go it is gonna go like never before in history.

My suggestion, remain patient, take your shots but protect them. Don't over extend in either direction, don't trust anything, even your emotions. Remember nothing is real anymore. What "has to happen" does not. Let the play come to you and when the hook is set, then you may begin to reel in the big catch.

Daily SPX- Welcome to a land where  multiple and building negative divergences don't seem to matter any more. The case against a continued rise keeps building yet price continues to climb. This is never a good scenario. 1460 (6%) is still my favorite target. Maybe the third time will be the charm. For those of you looking for more extremes, go for the 1420 (9%) diagonal support off the 10/11 lows or the double fib confluence at 1381 (11%). All could be in the ballpark if they can get a turn.

SPY Daily - I showed this chart yesterday in the comments section - Sure looks like the rising wedge is about done to me. Support gave way late yesterday. the 153 32% fib works really well as a target when you combine it with the minis chart below. 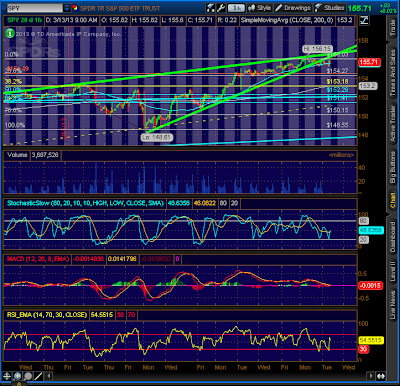 Minis 60m - The all time highs lie just north and the ascending triangle target of 1566 is still out there. To think those in control would stop just short of all time highs after all we've been thru is ridiculous. The white upper channel resistance that we looked at the past week has held and reversed price for now. the yellow triangle NT support has given way. All very good signs for the bears here. 1532 and then the 20 area are the two major supports that lie below. 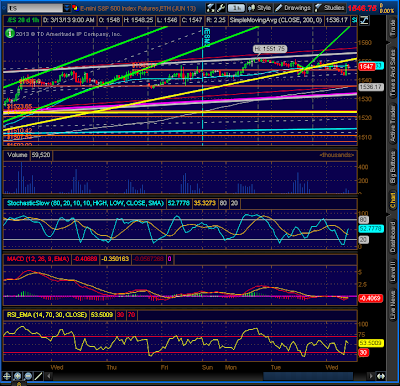 As usual. more to come below.