Somehow they keep dodging bullets. Is this the Matrix? Well, they don't really doge bullets since they control all the guns and ammo. They just put on a good show. Hype, worry, even fear are spread to ignite angst in the investing and general public to motivate them in whatever direction the government needs. It is all a show, one big distraction to keep you as far out of touch from reality as possible.

So we've supposedly dodged the sequester bullet for now. The greedy bastards are in full control and at this time it appears nothing is going to stop them. The CNBS propaganda machine was in full swing this morning with Buffet still buying seeing good value and the new powerful force argument from JPM (risk on) pumping the good time mantra. Sniffing all time highs is not good enough for this crowd. They've come this far and to think something will stop them with QEternity in their back pocket would be foolish at this time.

Italy and the rest of the PIIGS are crumbling, China is apparently in trouble, currency wars, stealth inflation, withering consumers and more - the artillery barrage is coming in hot and heavy now and just like the Agents in the Matrix their moves are awesome. It won't be long till something clips them and they will realize that they can be defeated. STB waits on that catalyst or direct hit to arrive, but till then it will remain business as usual. They are in total control. They own the program. Get used to it.

Catalyst, sorry, hate to keep repeating the STB mantra, QEternity till a catalyst, but that is all there is to say. Carts do matter still, but this is more of a news or event driven market now. March has the potential set up for some real disasters to hit the front page, and then every major top from the crisis lows has hit in April. I'd say they are finally ate or near the end of their rope.

Daily SPX - I have not mentioned it lately, but the daily RSI can be a great tool for monitoring the mood of the market.I like to slap a 25ma on it and watch the 50 line, both for support or resistance. Under the ma and under the 50 are not good things. It appears the rising channel (black) held support, and now price is nearing the upper pink resistance diagonal again all with weakening internals. If they can get a blast I'm suspecting it will be the last. If not, that should be expected as well given the fall just started and there is some overbought and overthrown conditions that need to be worked off yet. 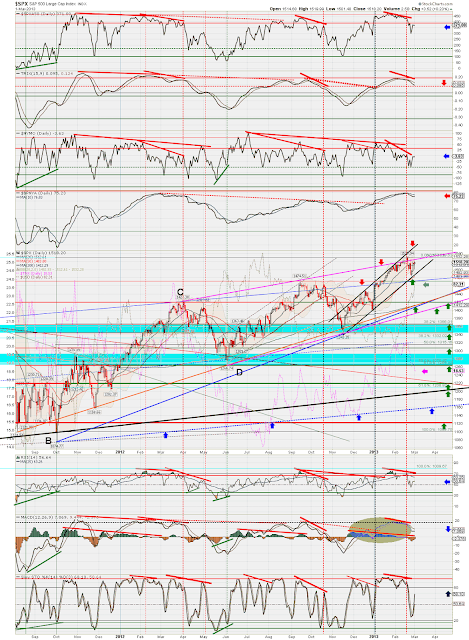 Minis 30m - Lower highs are working so far and that falling diagonal resistance is holding for the most part. Resistance is at 1522 and I like the 80 area for major support. Price is at an area where it may want to bounce around for a day or two in a narrow range, then we'll be given our next clue as to direction. 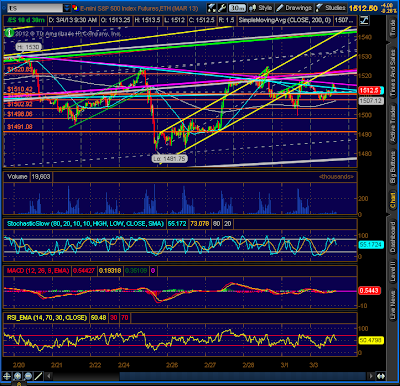