Well, it's good to know that so many still look at my chartbook. With it going down yesterday - not sure why - I guess SC did some sort of update that screwed everything up as usual (I have not had a good beef with them in some time) - anyway, the barrage of emails as to its status was pleasing to say the least. It is back up now. Sorry for the inconvenience.

Quick note - I'll have my 4th annual STB NCAA tournament bracket up today, and of course I expect all of you to have an entry.

CNBS has amazed me again this morning. With the SPX so close to a fresh new all time high and the DOW running away like Kapernick from the Green Bay defense (ouch!), it is funny to see the pundits and propagandists spouting their doom and euphoria. We all know which side the government sponsored market cheerleader is on.

The headlines are priceless. STB does no promotion and very rarely uses the tool of headline pump to bring in readers or garner more hits intentionally. It's just not my style. That makes the headline pump amusing to me. What they say to entice readers and the titles used to influence readership can be amazing (never mind the content that follows).

What's so sad is that, as USA Today has proven, is that most readers stop at the headline. So the pump machine today has junk like No 'irrational exuberance' in stocks now: Greenspan or Mila Kunis rotates from cash to stocks. Do I need to take this post any further? Really? An old coot that led us into this mess who stated that basically everything he believed was 'flawed' and a TV star's prowess are what they are promoting?

These are what they bring to the table to entice their readers to jump right in and follow the heard? Note the head fake as the Kunis post is about a potential top scenario, and the Greenspan post is pure hype. Biased? Balanced? LMAO! Just dive right in. get that money off the sidelines or you are gonna miss out brother. Can I get an Amen-ah!

I turned off CNBS a few years ago and believe my investing IQ immediately increased about 20 points. Outside of some eye Mcandy and Santelli, I see no other reason to turn on the pump machine. I mean they still have Cramer for goodness sake. Please dear readers, turn off CNBS. You will be much better off for it.

Daily SPX - No further comments until we get a higher high. With the JPM and GS junk after hours yesterday and virtually zero market reaction to it (too big to jail), I see little sense in really commenting on anything. It's pointless when the markets are totally controlled and 100% manipulated. Compare the economy as you know it to the chart below. Then look at the negative divergences to price and the overthrow of the rising wedge formation. 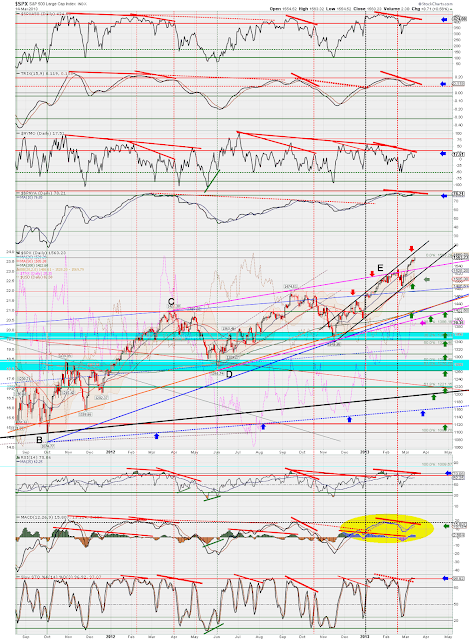 Minis 60m - 9 days up in an 11 point channel with no volume. Perfectly normal as CNBS will tell you. Better jump in now or risk missing out of the best bull market in history! (/sarc of course) 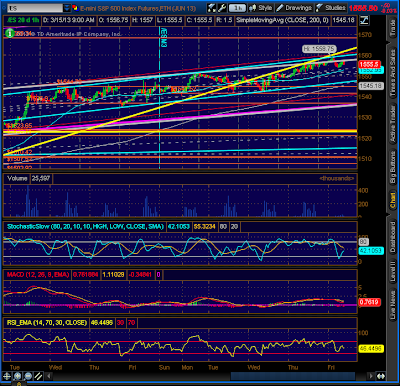 Minis 30m - Everything you need to know. White channel upper resistance after the breakout of the ascending triangle formation (target 1566). Blue channel dominating trade creating a double resistance point with white. Yellow triangle NT support after breaking down is now on the backtest acting as resistance as well. Then throw in the LT red resistance and you have a spot where price is challenging all time highs with 4 resistance points just above it, AND price is driving up pressing all this resistance on near historically low volume. you better get in now! There has never been a better time. Rotate now! Risk on baby! 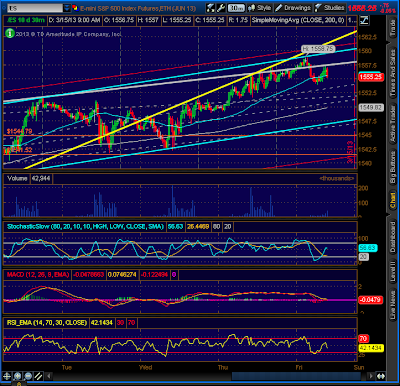 As usual more charts and links below.