Fuss? Why bother? We all know whats going down. We can see the blatant manipulation of the markets, the endless printing and the coming social instability. Off the 2009 lows the light at the end of the tunnel was distant and dim. It was hard to recognize. It was believed to be a ray of hope that the best of times will be returning.

Some have discovered as that light approaches and gets brighter that is is not what we wanted it to be. The light does not hold promise. This light is the unstoppable freight train barreling down the tracks and has us square in its sights.

Unfortunately, some still see the ray of hope. They refuse to acknowledge the truth. They remain in their cocoons stuck in their static and selfish manners, thinking they are made of Teflon and that nothing would ever destroy their dreams or disturb their reality.

The truth hurts more often than not. In our every child gets a trophy - every person can have as much credit as they want society, we've been conditioned to think that nothing can possibly go wrong. This is America.

How delusional have we become? History is the best teacher and greed is the great destroyer. We exist in possibly the greatest paradox ever as the most inteligent and wealthiest nation of all time is about to piss it all away because of nothing more than ignorance, brashness and greed.

If you are not in tune with reality, if you believe that the recovery is still coming, if you think our future is bright, think again. Now is time to cross that line and consider the other possibilities. You may not be afraid now, but you will be. You will be.

On to what's left of the markets -

VIX- long term, pretty much 8 to 48 going back 20 years. Most regulars know that I used to adore the VIX. I used to use it to time intraday trades and for me it was a sensational leading indicator. I even earned the title Dr.Vix in my early years on some trading blogs. Then something went horribly wrong, and the rest is the story. I've been claiming for years now that the VIX is busted and worthless. Why is there any fear or volatility when the Fed has QEternity? What is the purpose of the VIX at this time? There is none. ZH has two recent posts on the VIX here and here. 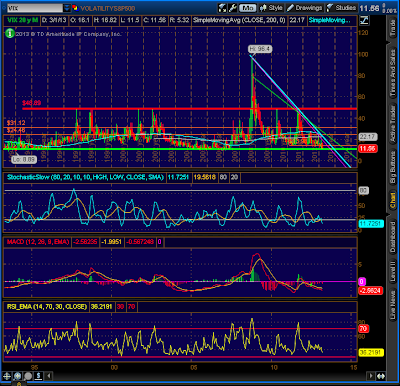 A closer weekly look - yes, those are positive divergences on the weekly RSI and MACD. Note the three descending resistance diagonals. 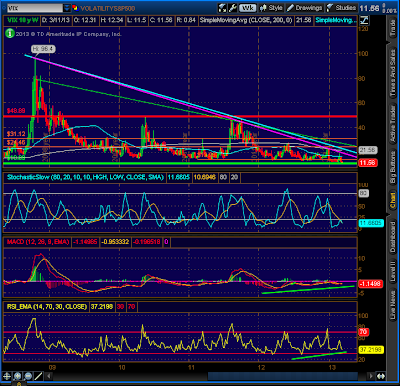 VIX Daily - And a closer look at the resistance diagonals - I'm watching these closely for signs the end will be near. 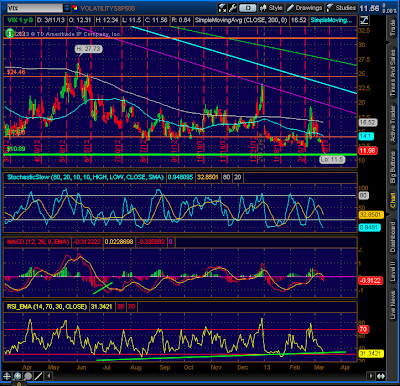 Minis 60m - as discussed yesterday upper white channel resistance and yellow triangle support contain price here. the 60m 200ma appears to be NT support. anything sub 1545 and the bears have the ball. Anything above 51 and the ascending triangle target of 66 should be in play. Remember we're close to all time highs. I'll cover all the targets in more detail is volatility decides to show back up. 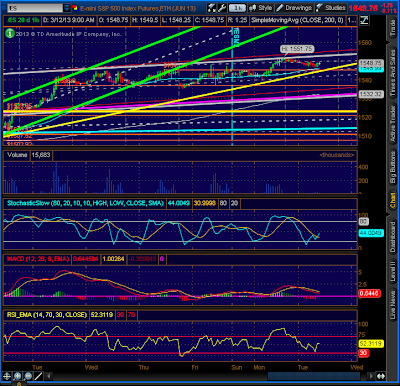 Most here know that March scares the heck out of me. Most also know that I don't think they lose control till something takes it from them, so I patiently await the catalyst that can make that happen.

As usual, more charts and other info to come below.