Party on Garth! Party on Wayne! That's the message that we received from the Bernank over the past couple of days of (worthless) testimony. Of course the markets react accordingly and all fears are quickly forgotten.

Sequestration, that's just another veiled threat or more pomp from the elected shills to give the world the illusion that they are actually trying to do something in DC to quell the debt crisis. We all know in reality it is no more than lipstick on a pig cause they will never stop spending. They can't. It's not in their DNA (what is in their DNA should be questioned and removed from the gene pool).

Starting today with the loss of Benedict, I believe we are entering an extremely turbulent time where serious changes (politically, socially and economic) are on the horizon.

If you are not know about or are in tune with St. Malachy's papal prophecies then you need to read this. This post is much more in depth and would be a good look for those with more questions. What is happening with the church is no small matter. Belittling or overlooking what's happening here is a serious mistake. The financial and social (both directly and indirectly related to the church) collapse has finally wound its way into the worlds largest sanctuary. Bottom line is this is some freaky stuff happening at some really freaky times.

Italy's recent issues have been swept under the rug, but someone will eventually trip over the lump of trash left under the carpet and get seriously injured. Cramming crap into a closet is no way to solve a problem. It does not go away. The Fed's buying MBS and treasuries is no different as the MBS still exist, they have just been taken off the table for now, but they will eventually have to be dealt with. Want a visual? Ever seen that show Hoarders? Well, the Fed's house is crammed with MBS and treasuries to a point that it is becoming uninhabitable.

Budget talks. Not sure if I will waste any time on this worthless subject. SSDD would be the best way to approach this topic. They can't and will not cut spending.  Realize that they are calling for end of world scenarios over cutting basically the same amount of funds the Fed spends in a month supporting the markets.

As I have mentioned, March scares the heck out of me for numerous reasons. From the papal elections to budget talks to Obummer visiting Israel and numerous (322) other events coming, it all adds up to a point that you can put your finger on where the crisis comes to a head. I'll add that every major top has occurred in April since the '09 lows.

Stealth inflation has been discussed here in depth over the past few month and years. You see it and feel it. It is real and yet unrecognized or unspoken by the powers that be. Of course "no on could have seen this coming". Just like "we're not in a bubble" now as the Bernank stated.

The ever expanding police state is a real problem that not many see coming. If you can take a moment, cross the line and change your view from fantasy to reality you will see the rapidly expanding socialist/police state. You need to know that this move is in direct response to the coming economic collapse. The DHS has purchased over 2 billion bullets for domestic use. They are preparing for something really large and you should be as well.

Their trump card? The confiscation of the $19 trillion in retirement assets and possibly every investment account in the US. This will further divide the haves and entitled. We have a war coming and you need to be prepared. they can't print forever and your savings are what they have targeted to continue their charade.

Daily SPX - not sure if paying attention to the charts now is worthwhile or not as team manipulation is in total control. Noting is real and you should approach all investment decisions with that thought first. They are desperate, more than ever, at this time and that is being reflected in the responses to market sell offs. I don;t think I will put much weight in anything till the budget talks have come and gone. As usual, I suspect a spend first and cut later approach which will please the markets. 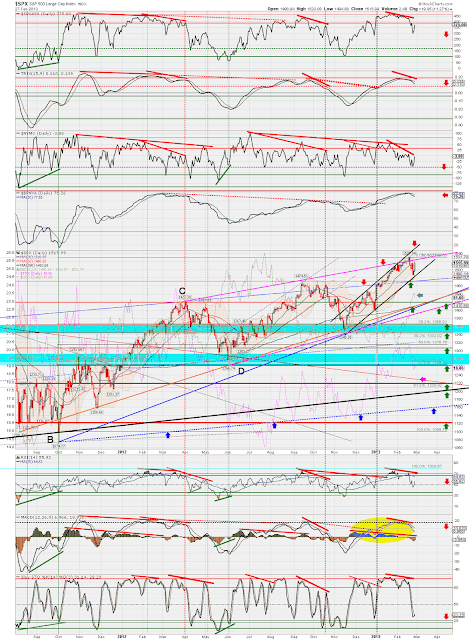 Minis 60m - STB point his (see below), lower high at blue diagonal resistance (actually the convergence of up to six resistance points), weighing internals, and so on - can the bears turn it here? 1511 was a drop dead number and this is the last drop dead point. If they can push thru here I suspect all time highs are int he cards. If not there is a real chance that 1530 was a multi-decade top.

Minis 5m - the move to and reversal off of the STB point given yesterday. Sorry for the late delivery of this point, but sometimes they do not reveal themselves as readily as others. 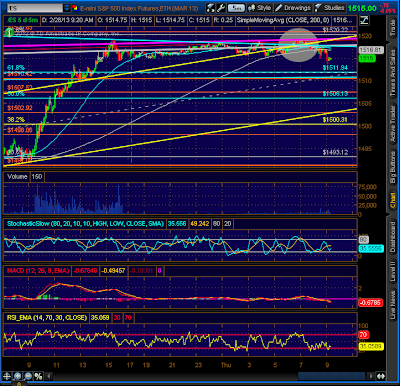