I wonder sometimes what I am missing or not seeing in the charts that I should. The missing nugget of truth that only the charts will deliver like nothing else. I used to be pretty good at this stuff, finding the clues, recognizing patterns and allowing price to ripen to a point just before it fell off the tree.

Wonder I shouldn't, because the markets are not real anymore. I'm not doing anything different or wrong. It is the markets that have changed or evolved into something that is no longer recognizable. QE driven fantasies where bids are endless and computers trade with each other in some sort of cyber game that virtually guarantees price will not fail.

So a negative GDP print indicating recession occurs but markets still insist on remaining at or near post recovery highs? Really? Overbought conditions persist on the tail of the worst consumer confidence print in years? Italian banks, China bonds, Spain, Greece, France is "broke", currency wars, Fed balance sheet, I could go on and on with the negative news reports the past few weeks, months or years. If it makes no sense, it shouldn't, because nothing is real anymore.

I believe the charts will get it right eventually. This time the end will come abruptly without warning. The monthly, weekly and daily charts are building their case for the cascade to come. The case where bad news is the best news cause it guarantees further easing will end one day. Reality will strike with the precision of a laser guided missile.

We just have to wait patiently for the Fed to trip up and for their system to break. It has been showing signs of cracking for some time now. The catalyst will come. It will lead to the "event" and the fall that commences will make 2008 look like child's play. It is coming. It will be real, and it will be devastating. I highly suggest that you get your affairs in order.

Get prepared for the worst case scenario. Ammo, guns, seeds, food, water filter, batteries, vitamins, etc... be prepared to hold up in your home without food, water or power. If you don't, you will be at either the governments mercy or worse.

Minis 30m - Well, they took back the 30m 200ma last night. Lovely spike this morning exploding off the break of that to the upside. Why? your guess is as good as any. Does it matter anymore? Again, the catalyst - not till their system breaks will this charade end. The possible HnS I was pointing to yesterday still has a chance as the RS is still in formation. Upper blue channel resistance hopefully will hold price here. the 1502 s/r area goes back to 2007 and can be seen all thru that top. I'd keep watch on that 30m 200ma for further clues. 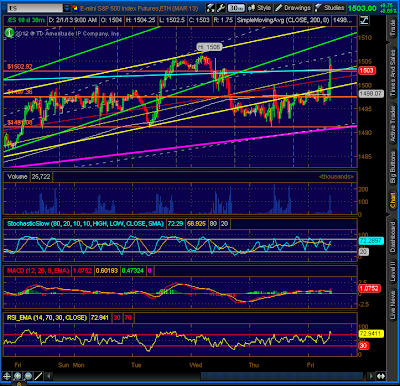 SPX Daily - For what it is worth - Overbought and overthrowing with some impressive divergences as price closes in on all time highs. It is just ridiculous. 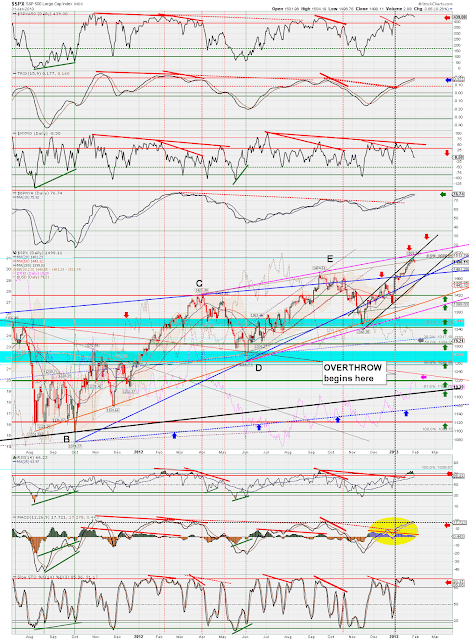