Can the surreal become surreal? Can you double down on insanity? I mean, once you have crossed the line, that line beyond comprehension, can it be taken even farther? Back in August we entered a period of unprecedented intervention in the markets and everything that surrounds them. This was when that second tier of insanity was entered. I swear the people running the show must think they are in some sort of parallel universe where their experiments have no conceptual ramifications on reality.

What has me miffed today is the ADP "Cancels" 365,000 Private Jobs Created In 2012 news. It was just yesterday we got New ADP Count Slashes Job Creation for September where even CNBS reported, "ADP's new calculations put the monthly job creation at just 88,200, down from the 162,000 the firm originally reported earlier this month." What the heck is going on? New calculation? Moody's? Like I said, central planners in a parallel universe out of harms way conducting experiments on the rest of us. This is your new reality. I guess we were not given a choice of which pill to take. Welcome to the matrix.

Thus, commenting on market gyrations here at critical support right before the election and the EOM ramp is pretty futile. I have to assume that markets will enter a wait and see mode around this 1400 level till we find out who wins the sweepstakes in the most powerful man in the world contest (LOL).

Something that has flown under the radar (I guess cause things like running out of money are common events these days), but I have been pointing to all year is US to hit borrowing ceiling at year-end: Treasury. Fiscal cliff? More like a gorge. Things are going to get really ugly soon folks. I have no clue how DC will deal with this one. Maybe another Super Congress? LMAO, that worked well didn't it?

Minis 15m - There is a chance that the minis are setting up another smaller HnS under the possible one that possibly just broke down that targets next support near 1374. Of course both are highly unlikely to play out as HnS formations have been more like launching pads than patterns leading to destruction. Either way, you have to acknowledge the pattern.

Big Blue is holding for now. What was potentially a rising wedge in yellow is now trying to become a rising channel. Bottom line is price is trying to form a base here at the round level. Upper resistance is green at 1418, then channel at 1423 and then 32 of course. Support below big blue is minimal and nothing significant till you reach 1374. 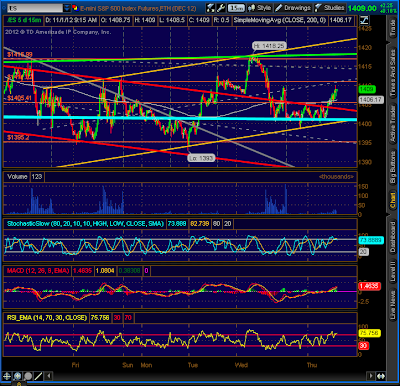 I wait on my catalyst. I think the election and Sandy aftermath will keep a lid on things this week. There could be some disturbances in the force, but I suspect Potter and the Alliance with the Dark Side will maintain their position.

Daily SPX - I do not think you can ignore the weekly and monthly charts which have taken a turn for the worse, but this is the Fed's world and we only live in it. Some of the indicators here are trying to bottom, but others still have a ways to go. Watch closely as the 20/50 dma bear cross is only 3 points away. The 200dma is just at 1375 next support. that is just below blue rising wedge support. Those should be hit. 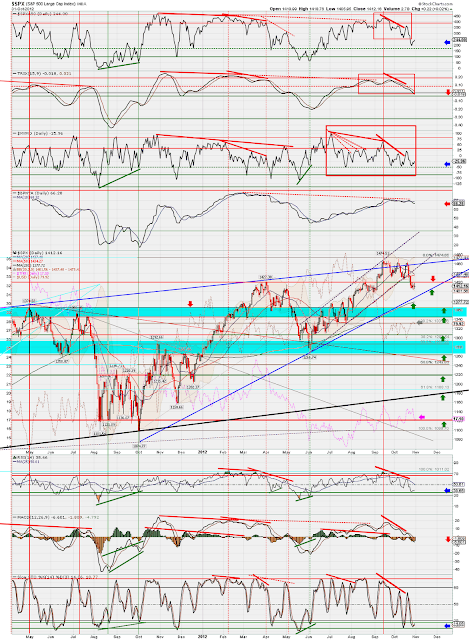