Well, are we culminating? Is this the final chapter? If not we're winding down the book and nearing the end. The dreamers look to the last stack of pages with great anticipation thinking that the hero (government) is going to pull us out of this hole and all will be well. The realists eagerly anticipate the government failing and the destruction of the global financial system.

The sequels? The dreamers sequel will look more like Orwell's 1984 where after the great stick save the US government had to sell out to the UN. Global government is installed. Everyone works for the state and all freedoms have been lost. It is a cold impersonal world ruled by the few elite and their corporate monopolies. It will be a worthless place to live in.

The realist scenario is much more exciting. The government's failure brings on revolution and change righting the ship taking the country back to its constitutional roots. Battles are won and lost (think Red Dawn with our army as the enemy), blood is shed and new leaders rise that resemble our great forefathers. The country is reborn and we take our deserved and rightful spot atop the globe as the greatest nation on earth.

You all know by far how I want this book to end and which sequel I want be a part of next. For now I will leave out the biblical and scientific scenarios. This Book has already been written. If you have not read it lately, I suggest you get a copy and keep it close. The antichrist is real and may be among us. The polar shifts ARE and have been happening for a half century (actually moving faster than ever). The universe and our world is changing. Mass animal deaths all over, earthquakes, famine, great storms, all the signs are present and increasing in frequency. (extraterrestrial existence anyone?)

These last few chapters have been discussed in earnest every day here at STB for years now. The story has become beyond tolerable as over and over and over again has the Fed bailed out the corrupt nation and kept it alive when it should have collapsed years ago.

The two main forms of life support have only increased the internal disintegration of the system and made any recovery impossible. QE has given false hope and only created an illusion that all is well, and with every step towards the end the desperation to save power has only intensified and expanded the corruption that is wrought throughout the system.

There is only one way this (earthly) book can end. The people must rebel against the elite in control and take power back and restore the constitution. Most here realize that the nation is right where they want it. Split in two. Until we can unite, there is little to no hope of ever turning this thing around and restoring our great nation. The expansion of the welfare state must be reversed or we will have lost.

The fiscal gorge is real. We all know that. We discussed its coming so much over the past few years we got tired of talking about it. It is old news. Let's get this thing over with already. To those that think this is new news, are surprised and can't figure out how we got here, I suggest you go back to the beginning of this blog over three years ago and start reading from the start.

Or you can listen to the man we should have elected as president, Ron Paul: "Pure Democracy Is Dangerous"... When It's Purchased. His not being elected will be considered the greatest "whiff" in our political history (twice!). "the reelection of Obama is driven simply by 'the people' being on the 'receiving end' of government benefits and that the US is "so far gone; we're over the cliff already."" Can I get an Amen!

As for the charts, I suggest you look at yesterday's post first. That covers the basics of where we are now. A top (most likely THE top) is set. It was clear as day with the triple top formation, the divergences on the daily, weekly and monthly charts. The only question remaining is how much power they still wield over the markets? What amount of intervention can they muster and how? You know they will come back again to crucify and burn the shorts alive one last time. This is a virtual guarantee.

The next few months should be brutal for the markets with our fiscal situation, a divided congress and Q4's forecasted disastrous earnings down the road (not to mention the EU, MENA and a plethora of other negatives). How far can they let it fall before the algos trigger another flash crash? Count on them making one last stand and after that it will be all over.

It will be slippery with Hilsenrath and Potter doing their thing to build false hope and confuse the markets at every turn. I believe we can manage this mine field and they will telegraph the next turn up along with the technicals calling it. Remember, the next top, higher high or not, will be the last for possibly decades if not forever if the markets survive this next fall.

Till then we need to patiently walk this thing down. Remember '08 all the way and the discussions and tribulations we went thru. They are all going to return. I believe the support/resistance levels will be clear.

SPX Weekly Target Chart - How bout us revisiting an oldie but a goodie from the STB char archives. The last time this chart was updated was in April of this year. I fortunately gave one last scenario of the four that led to a higher high before the crash (purple). We're in that window and have just topped where I thought price had a chance to go. The scenarios from here are all pretty dire. I will not (because I refuse to) consider a higher high from the last top although it remains possible - what isn't in a totally rigged/controlled environment? Note the target box in black. I will adjust my fall scenarios soon, but they will all end up near or well under the current target. 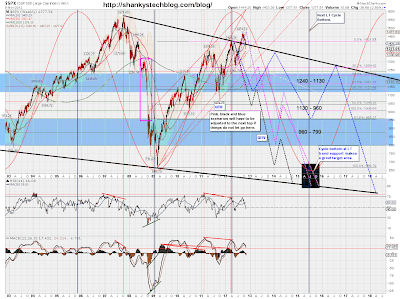