So we get to spend another day waiting on the next soundbite to charge the market in one way or another. Funny, as bad as it is, as awful as the situation can be, the markets are charging ahead knowing that the cliff will not be breached. No matter the negative future consequences of whatever impractical solution they come up with, as long as they are solvent in the near term is all that matters. Short minded? You betcha.

If you are one of the few not conditioned to praise added debt in the name of future progress, you may need to be admitted to a reeducation center. You are not properly processing thoughts in line with the state as you should. You see there is a new sheriff in town and he's a socialist. Well, not a new sheriff, but one that is looking to expand his current power base to totally control everything.

See Obama's opening "fiscal cliff" bid seeks debt limit hike, stimulus. "The Obama administration's opening bid on Thursday in negotiations to avert a year-end fiscal crunch included a demand for new stimulus spending and authority to unilaterally raise the U.S. borrowing ceiling, a Republican congressional aide said." The dude wants to be all powerful. He wants to eliminate all competition. He wants to fully implement the welfare state to cement his third term appointment.

The markets are apparently OK with this as. As long as everyone is making money who the F cares? Who cares about democracy or a sound economy? Everyone on Wall St. and that works for the TBTF's is getting rich right? I often discuss the loss of God and the self serving attitude the nation has devolved to. This is the prime example.

The rich are getting richer and growing their power base while the poor get poorer. The ignorance of the sheeple of the welfare state is astounding. Give them some candy and distract them while the socialists take total control. One day soon when their power base is complete the sugar daddy is going to stop supplying everything they need and then it will be too late. From the video below, "When the military boot crushes them, then they will understand but not before then."

I suggest you watch this vid (h/t Mrqt). It is SO SPOT ON! It will be featured in the OPW this weekend. IT perfectly describes how and why we are so lost, or how we made it to the vid from yesterday The Madness of a Lost Society. Put the two together and you will understand why we are where we are psychologically.

So here we sit listening intently to a bunch of politicians pumping crap about solving the fiscal cliff problem while in the end noting will be solved, no hard issues will be addressed and more debt will be issued and all will be well (or ignored). I'll see you in a year from now when we will have the same discussion as we did the past three years.

So who delivers the market gyrating soundbites today? That is all there is to it now. Wait and react. Trying to place bets (especially short) ahead of the talking heads is very risky. Remember we live in the land of unicorns and fairy tales. Nothing is real anymore. Thinking rationally and being rooted in reality is the most dangerous place to be.

Minis Daily - Falling channel off the top has given way to the "fiscal cliff will be solved" rising green wedge. Ahhh, optimism. Isn't it just lovely? Sadly all it is is optimism or hope. There is nothing real about price at these levels. You still must respect the machine and its power. Thinking rationally is a sad mistake. 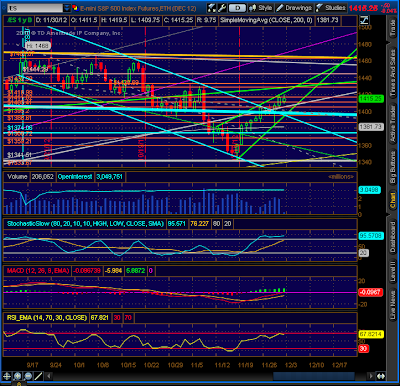 SPX Daily - 50 dma and the 1422 s/r line have price here just above the backtest of the busted blue wedge support diagonal. Retracing close to 61% of the fall off the top, this is the farthest the bears can let the retrace run and not lose control of the ball. If this is breached, shortie better be on the look out. 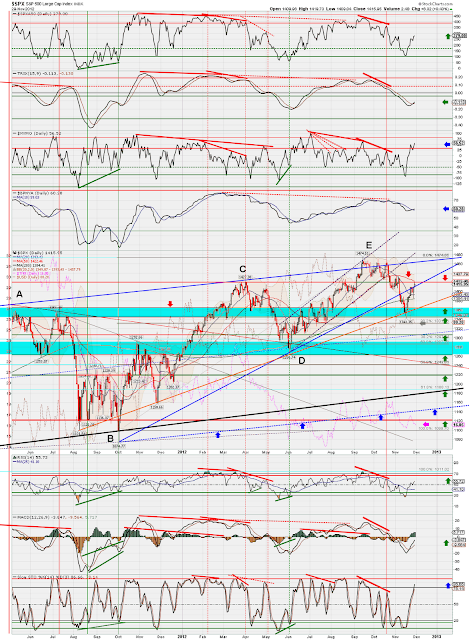