This is something I obviously missed Friday or over the weekend and just caught last night, Treasury Secretary Geithner: Lift Debt Limit to Infinity. "host Al Hunt asked Geithner if he believes “we ought to just eliminate the debt ceiling.” “Oh, absolutely,” Geithner said.

Well, when it is painfully obvious there is only one path and that QEternity has been laid on the table, why not? Sure would make things easy in DC. Now as for how the markets and the rest of the globe would react to this is anyone's guess? Let me take a stab at it, the world's most dominant military power decided it can print all the money it wants out of thin air at any time it wants cause it can would not go over very well.

The idiocy behind this idea is not one of those things that will turn out to be brilliance. This would rank right up there with the founding of the Fed and the elimination of the gold standard as one of the most idiotic decisions in US history. Actually it is the natural progression of policies because of the last two idiotic decisions. It is the end game scenario.

They have pushed and stolen their way all these years and now here we are. A busted economic system that can't sustain its self. They took the greatest nation on earth and pumped it full of steroids and now we have no balls and are cancer ridden. Thank you Federal Reserve.

As for the markets today - Holiday low volume action that is watching Israel and DC. Channeling down and after bouncing off 1341 support, coming back thru 1374 (surprisingly to STB) is marching towards the round level and a backtest of big blue. The STB points on the 27th have been discussed in the commentary at 00 and 41. There are numerous HnS possibilities open now. 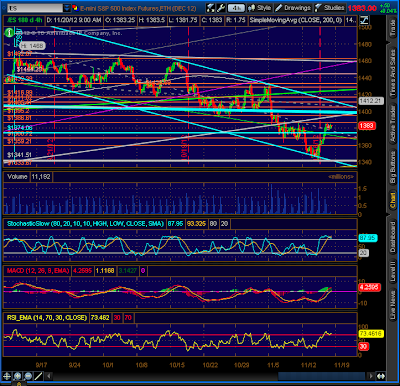 SPX Daily - Oversold is for sure, but a set up for a massive rally is not. Reversal or retracement, I can go for here, but some sort of rip roaring rally, not so sure. You have to watch the Fed though as the markets are 100% manipulated and anything is possible of course. 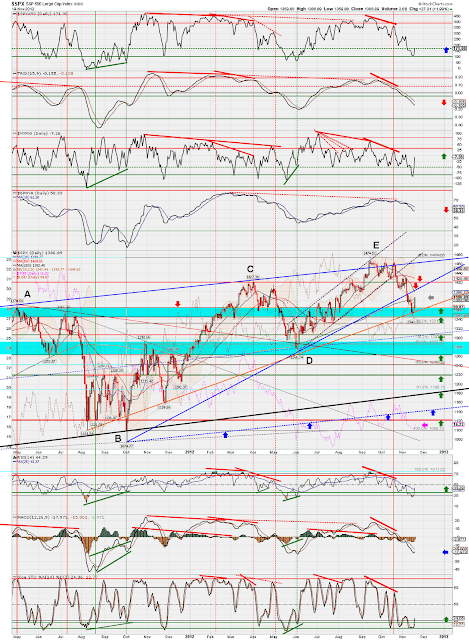 Enjoy the holiday week. More charts below as usual. Anything over 1400 this week would be a surprise to me, but is not out of the question at all.