Investors are being held hostage to the fiscal cliff discussions. Slaves to the system is all investors really are right now. They control nothing and are simply riding the tides in and out. When the individual investor lost was when investors as a group lost the ability to change the tide.

Being held hostage to discussions is nothing new in the market. Talk is cheap and that is all you get these days. They use rhetoric to drive the belief that all will be well and there is always a solution. They have conditioned us to believe that things can't go wrong and the government will always be there to solve the problem. From Draghi to Evans, Geitner to Boehner, Potter to Hilsenrath, they all pontificate and promise what will never be delivered, but the markets believe and push forward anyway.

The backstop is the Fed. You see, even the government knows it is full of shit and can rely on the printing press to bail it out. Trillion dollar deficits are nothing now. Back in 2008 a trillion was an enormous number. When we used to speak in billions it would rattle the markets, now billions have become pocket change.

So here we are playing political pong with the ball slowly moving across the black background being bounced between the democrats and republicans. Each acting as they have you in their best interest rallying targeted shots at each other meant to make you believe they are fighting for your cause. They both know that in the end the presses will be fired up and all their words will be nothing more than a side show to get you to believe they are actually trying to accomplish something.

They are not in DC to serve you anymore. If so the big banks would be busted up, the Fed would be dissolved and a balanced budget would be a reality. They all know the math.  If you constantly make 2 and spend 3 all the while owing 16 (with 120 allocated) there is nothing that can make that work, ever. So they prance around putting on a show assured in the end the presses will be fired up once again to save their asses.

The markets act as they know this as well. Well they do. The markets know before the politicians do. They are both run by the same people. What may be different this time than in the last three instances is that the math is even beginning to catch up to the Ponzi masters. The question you must ask is at what point did they know the system was going to fail and how long have they been planning for the immanent collapse of the system?

So market watchers sit and with awe watch wild fluctuations in price on every soundbite. Why with awe at this point, after years of this practice being in place? Because the sheer fact that our markets are totally rigged, that the greatest free market ever developed has been high jacked is truly unimaginable.

It defies logic or rational thinking and that is what makes investing so totally dangerous at this time. We all sit down in the mornings knowing one thing and seeing another. We know the math will fail and that the end is coming, but the markets keep going up. Nothing is real anymore. You may as well check your brain at the door each morning, cause there is little use for it during the remainder of the day. It will only get in the way of making wise investment decisions.

I brought this to you yesterday morning via STB's fav morning vids and the Hyper report and asked you to watch it then, and I'm asking you to watch it now. ZH picked it up later in the day in The Madness Of A Lost Society.

Minis 4hr - The STB point near 1400 on  the 27th worked like the magnet they sometimes do. This triple resistance point is where LT Big Blue off the 2007 top, LT busted white support off the October lows and NT blue channel resistance all came together. This point was pierced yesterday to the upside.

This is an incredibly decisive bullish move. Almost as if the market masters are trying to prove yet another point that you are not to fuck with them cause they are in total control. How this point is pierced in this current environment is (remember, check your brain at the door) truly unfathomable (well, in real terms).

I remain bearish, but warn against manipulated trumps like the below.  At this time the 1430 area is all I am willing to go, but as usual you can never rule out the unthinkable. As long as they have the fiscal cliff discussions they have the ability to use their words to artificially create belief or hope that the government will solve the problem. This is all they need to move price higher regardless of the economy or any fundamentals you can find that are still relevant. 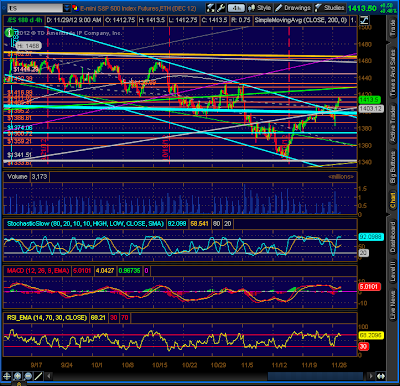 SPX Daily - Same old chart, but it tells the story better than any of the rest in the chartbook. The backtest is still holding. They have not pierced this yet on this chart. Technically a reversal should come off of this diagonal. Price can ride this diagonal up. Price will do whatever they want it to actually. So be cautious if you are short here. They are desperate and love to crucify shorts to prove a point. 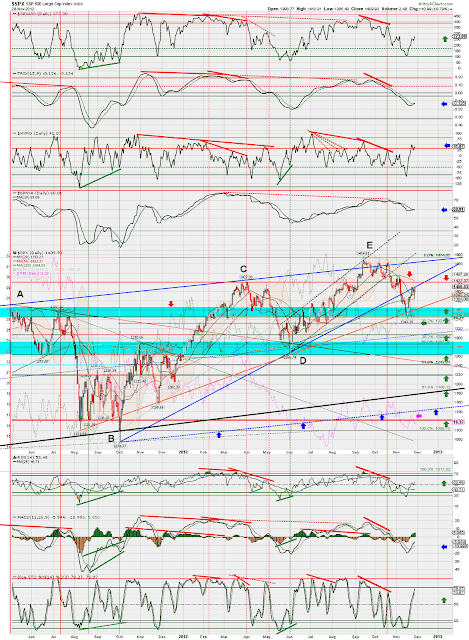 I sit and wait on my catalyst that will lead to my "event". I scalp long and short still refusing to swing anything. I believe this is a very dangerous time for both longs and shorts and prefer the short side all the while fearing the long side. December 7th id D Day for Greece (again). Markets may try and make some hay between now and then. You know they will be saved as well as the US, and these two "winners" could yet bruise the battered bears yet again. The end is near. They can't hold out much longer. the lifespan of the bailouts and their market lifting powers are fading. Get ready now like the video above says. IT won't be long till the great crash comes.