Did the jobs number really deserve a 10 point pop? Seriously, we've been discussing the riggedness of this whole employment thing for months if not years, add to that the BLS BS and every other data reporting group and laughable does not even describe the BS that's going on behind the scene. The sad part is we all know it is rigged as hell and markets still celebrate the beat. WTF? Really? We actually stress out over whether a rigged system will deliver a beat, on time, on cue, right in line with where the incumbent needs it the last Friday before the election? File this under No Shit Sherlock. Like I said yesterday, even what is surreal is becoming surreal. 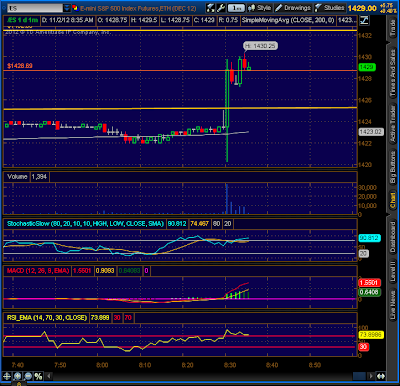 As you know by now, I am quite disgusted with the whole mess. Embarrassed for this country quite actually. We have settled for the easy way to riches thru corruption and lies, abandoning all our founding principles and the Constitution like whores in order to take the quick and easy road to prosperity. Well look at where that has gotten us. The brink of the fiscal gorge cliff. Porrer than poor and yet we march on spending like there is no tomorrow - oops - did I just say the obvious?

Shall we use this election to emphasize just how bad things are? LOL. And your two candidates are a Kenyan that has proven to be a liar and the worst president in history and a former governor that has a resume that fits perfectly for the lovely crowd that is in control. And we tolerate this? We tolerate corruption knowingly cause they give us things. We quit being real Americans years ago.

Can you say mafia? You have a Chicago mob candidate versus a New York mob candidate. Who can rig the election the best? My thoughts all along were that Romney would win in a landslide, but the more I think about it I think MR wins the popular vote but Obummer may steal the victory. I'm not sure if it even matters how they rig the voting machines. I think they know who will be the man in control already.

Hope, well Obummer gave that word new meaning didn't he? How can you take a word with such promise and turn it into one with such negative connotations every time you utter it? And this man is even being considered for a second term? WTF? If he wins watch for the antichrist discussion to explode (and I may be right there with them).

As for the charts, make of them what you will.

Minis 4hr - Sure a pop or corrective should have been expected off big blue support and the round number before an election and headed into Christmas season. Yellow channel resistance busted this morning on the great employment numbers (Yippee!). Price is a day late but close to the SPB point I mentioned earlier this week where pink meets 1432 s/r line. Close enough for me. The next potential STB points are a few days out near 1460 and 1432. Actually if they play out a move to 1460 will garner a quick drop to 1432.

Can they push price above this point? What can't they do is a more pertinent question? If they crack this then 1444 and 62 would be the next resistance points. 1440 is the 61% retracement off the 68 high. If they can manage to crack that I would be inclined to think they have higher highs in mind. Remember, total control and unprecedented manipulation. All you can do at this point is wait on a catalyst.

There should be some sort of reaction by the markets to the election, but not much as both puppets in consideration will ultimately do whatever wall st and the Fed want them to do. 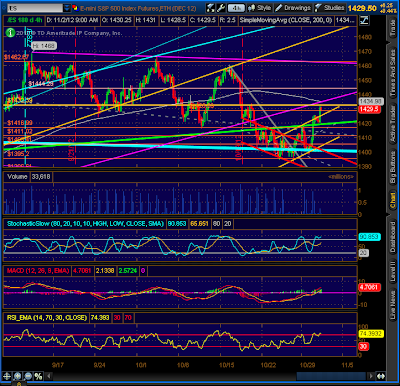 I'm pissed off again and you should be as well for what they have done to this nation, and how you and I have allowed all of this to come to pass. The money changers will be thrown from the temple sooner than later. Sadly we'll all have to pay the price for we all have participated in the sin. That may be what this great correction that is coming is all about.