With Thanksgiving and a not so hot Black Friday behind us, it is time to start looking towards Christmas. Greece and the Fiscal Cliff are the major problems on the table right now alongside massive global unrest.

There is really not much to add or say this morning other than the normal fraud, manipulation, scam, trash, BS that is normally out there. The government must deal with the FC issue front and center now. It appears there is no doubt that the debt ceiling will be raised and the crisis will be averted. What they are doing in DC is anyone's guess. The lack of news and bickering that came with the last few debt ceiling instances leads me to believe most hands have been thrown in the air in disgust and they are all just waiting on the big check to be written.

What is different is that the economy is worsening and all the stimulus poured in has done little is any good other than giving the appearance that things have stabilized. The markets appear to finally be growing weary of the debt issue and the simple addition of more stimulus does not hold the promise it once did. The markets also appear to not believe the BS from the BLS anymore.

We're in a very precarious spot as a nation on many fronts right now. Time is short for the markets and the crony capitalists. Bernanke knows he's failed and they are simply buying time now. I'm not sure if the war with Iran will come before of after the financial crash. I am certain they both are coming soon though.

As for the charts this morning, The minis have made it back to big blue at the 1400 round level and upper channel resistance. They are also backtesting the busted white diagonal off the October low. This is also near the 50% retracement of the fall from the top. For those that were paying attention last week this is one of those STB points I was discussing to hit on the 27th. It came a day early. This is a very serious resistance point. I'd give it 1432 s/r backtest as a max for now possibly where a backtest of the busted green support meets that on 12/13. 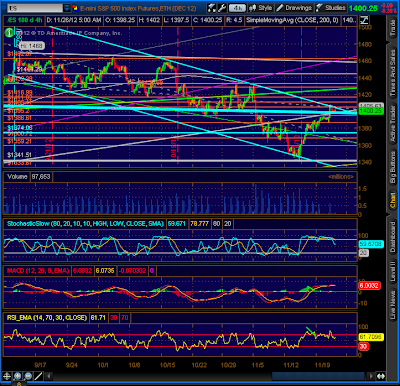 Daily SPX - The indicators here have a lot of room left to run, but the reversal back thru the 200 dma did not come with the best of set ups for any sort of major or sustained move north. Backtesting the busted blue wedge support here is a dangerous spot for bully. This chart looks like 1422 would be the max out point if the Friday high was not it. 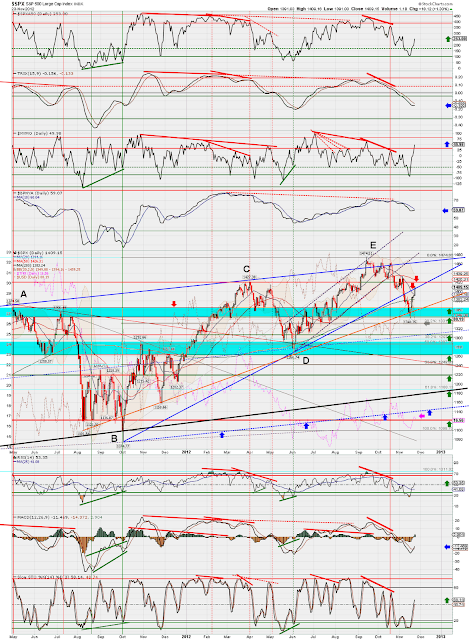 Remember you are dealing with a crony capitalist elite controlled BS market where nothing is real anymore. It appears that some of the Fed's magic has been lost and the markets are starting to show hints that reality is about to come back with a vengeance. Patience and time are the only requirements to get the trade right. The short move is coming, but you have to let it come to you. I, as always, wait on my catalyst which will lead to my "event". Till then I scalp short or long.