So, did we get an STB catalyst yesterday? "The Israeli army said 156 targets were hit in Gaza, 126 of them rocket launchers. It said 200 rockets had struck Israel since the start of the operation, 135 of them since midnight." (War looms after Hamas rocket kills three Israelis) Sounds like a catalyst to me.

Remember I think the catalyst will lead to an "event" that is out of the Fed's control. The Fed nor our government control any of this. If this were anywhere other than Israel I would not be as concerned. Scuffles in MENA are common, and with tensions rising across the region and Israels quick and deadly response this may be more than a firefight.  These things can get drawn out and hopefully they stop all aggression here, but that is highly unlikely. I believe the fuse is lit and "Operation Mushroom Cloud" or whatever the name is has a pretty dire and ominous ring to it.

The big news yesterday other than Israel was the FOMC Minutes Show Fed Members Expect More Unsterilized Monetization After Twist Ends, As Expected. "In other words, the Fed will have to continue monetizing the long-end of the Treasury issuance in lieu of other willing buyers. Recall that the Fed is currently buying up all the 10 Year+ gross issuance. To assume that this can change in some way is ludicrous. It also means that going forward, anything less than $85 billion in monthly flow from the Fed will be seen as tightening." So in order to just "maintain" our position they have effectively had to double monthly purchases this  from doubling them before.

As several noted here yesterday, it appears the Fed's game is over. "once again indicating (as shown during yesterday's Yellen comments), that the Fed has priced itself and its future decisions out of the market". They have finally reached their limit. This would be an internal catalyst working the system from a totally separate angle. Their world is beginning to implode.

Unfortunately the corrupt government still has its full force field in  place. As for reality in the Divided States of America - House Republicans Find Corzine Guilty Of MF Global Collapse, Missing Funds; Democrats Refuse To Endorse Findings. This country so FUBAR it is unbelievable.

It is required the each of you listen to this in its entirety and carefully.

On the note of liberty, you should read Russia expands treason law, critics fear crackdown. This is the direction we are headed, so get ready.

SPX Daily - So where is this market headed? Where will the slide stop. Well yesterday 1374 major support cracked and the next stop of 1341 is only 12 SPX points away. I've not faltered looking down here. I was surprised they Fed did not make a stand, but after reading the above, maybe their magic has withered.

I added the orange support diagonal that price is resting on now last week. No divergences, but the indicators have all finally reached a point where near term oversold is a reality. Price is in the second blue support area which it could correct from. I would like to expect a backtest of the busted blue support near 1420, but at this time that does not look all that likely. This move looks like it has the potential to get really ugly and with the QEternity losing its luster, the bulltards better be in full warning mode. 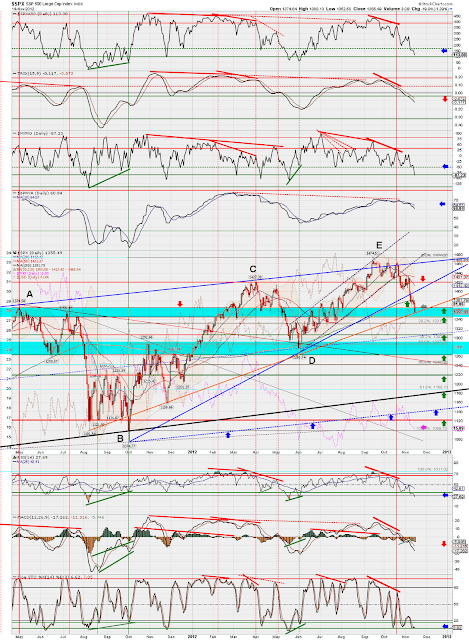 Minis Daily - The HnS I was looking at off the top targeted the mid 1330's. I'd gladly take the neighborhood of or a touch of 1341 as a possible retracement point. There are some backtests that need to happen before a more coordinated or stable move south can really begin. That may be asking too much from a market supported by lies and corruption that I believe is overvalued at anything above 800 SPX points (and that is being generous). 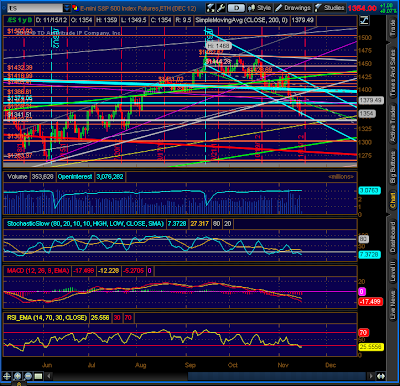 So, I still am looking down and if price makes 1341 I'd look for consolidation between 1374 and 41 and a DCB while positive divergences form on the daily charts. If not, AFDB time and the word "flash" will be high in the word cloud for STB.

Have a nice day!