So congress is back in session, and we sit and wait on a bunch of bought and paid for bureaucrats to decide how to handle this mess they got us in. How do you think this is gonna turn out?

I should really stop the discussion there as we all know this time will not be any different than any in the past. They will bitch and moan, put on the dog and pony show for each side and in the end wind up raising the debt ceiling yet again without constructively doing anything to reduce debt. You know, reducing the debt to zero by 2070 and increasing spending in the current session really is not a solution. Pushing the debt issue four years down the road to the next administration is all they will try to do. Rinse/repeat.

So the markets are held hostage again waiting on word from DC that all will be well. Yes, that is actually happening, there are idiots in charge of trillions in investments that actually believe a solution will arrive that can magically solve our debt problem. They think the real estate market is recovering, the jobless will magically find work, the ever expanding welfare state will reverse, that this country will stop shipping jobs overseas and the price of oil will be back under $50 in no time at all.

I suggest you read Guest Post: The Definition Of Insanity. We've all known this fiscal cliff was coming since this time last year when they had to go to the well for the second time under the current administration. There is apparently a functional issue in DC that can not be solved. It is a spending problem. It is income of $2 trillion and spending of $3 trillion that is slight problem. The math just does not work, yet they continue to try and grease the edges of the round hole with dollars trying to get the square peg to fit in.

In a nutshell the problem is, "Obama, and the Democratic controlled Senate, have already lined up on raising taxes on the "rich" while the Republican controlled House has firmly asserted that they are amenable to closing tax loopholes in conjunction with spending cuts.  The two sides could not currently be farther apart from reaching a deal - yet, as Yoda would say: "Reach a deal we must."" And I remind you that they have had ample time to deal with this issue.

So what will be the result, another unconstitutional super congress? Who knows? I do know that whatever they do come up with will be a total farce that will solve nothing and wind up making matters worse in the long run. So the markets now move from soundbite (Reid-On; Risk-Off) to soundbite (Say What Mr. Reid?)  reacting to each as Pavlov's Dog only could.

Looking at Greece real quick, December 7th is the D day there. This is a big deal? Well, it should be. I think, like Japan, father time is finally calling in the chips. We all know Greece will never in a million years (literally, not figuratively) be able pay back their current debt. It is apparent that some of the crony capitalists are finally starting to get a clue across the pond. The system may be finally about to crack for good.

EUR/USD - is that a possible head and shoulders I see? If not the pink falling channel dominates price here. The rising green support diag is major support off hte '02 lows and is IT for support. The EUR is hanging on by the fingernails at this point. 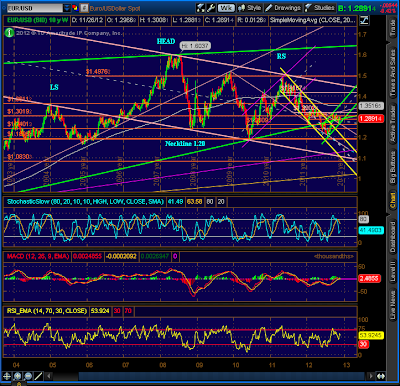 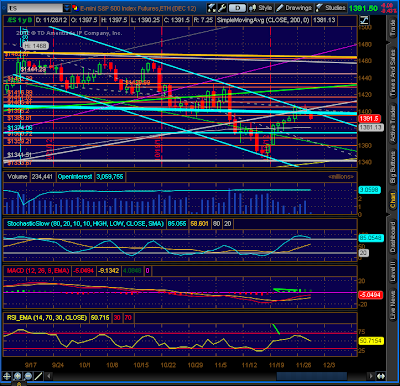 Daily SPX - Backtesting the blue wedge support. While the indicators still appear oversold a bit and are all turning bullish for the most part I have not been and am still not buying it. Sure, they got an oversold pop on some BS news and an expected retracement, now it is time for the bulls to put up or shut up. This as mentioned yesterday is a critical spot for the bulltards. I'll give them to the 1420 to 30 range if they can muster that only because this market is totally rigged, but no more at this time. 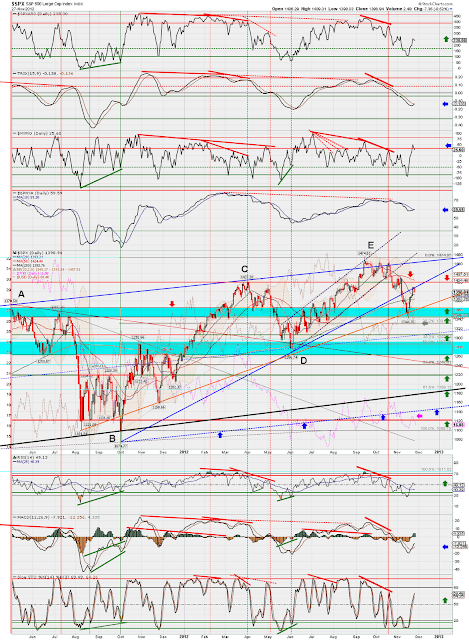