What a week. Wars, cliffs, FOMC, eclipse, affairs and the death of the Twinkie; not sure you could cram much else into that.

We all need to be thankful that we got Obummer back as president. I mean the man has done such a great job. His foreign affairs policies are just tremendous. With that his running trillion dollar deficits all four years of his presidency he has spent this nation back to prosperity. Heck, they ran $120 billion in the hole just last month (I'm positive Sandy had a lot to do with that). He's done such a good job that we now have lost Hostess and their 18,000 jobs (let's not go into the solar thingy), the post office is bust (and this), companies are laying off workers or charging more cause of Ocare, and .... well, let's just stop there for now.

One has to wonder just how big the closets are in the white house, cause they sure can cram and hide a bunch of shit in them. Is anyone surprised that just weeks after the election the initial jobs claims soar and the Philly Fed drops one on the carpet? Take a look at Banks told by Fed to test for 12% unemployment (h/t Fish). Does this surprise any STB reader? LOL, you are probably thinking why not 20% or more right. Basically just another MSM low ball or half truth.

Who the hell knows what's real anymore. I'll tell you one thing that is real, our government is out of control and the people have lost all power. The Fed has destroyed this country to glorify and empower the banksters.

Let's get to the markets - Israel v. Hamas is driving everything right now along with the fiscal gorge issue. That is a double whammy and the markets are reflecting this. To those looking for a pop, you will have to get two things, a cease fire and some sort of cliff resolution. Till then the drift will continue. The risk is far too great and QEternity has taken almost all the power from the Fed.

So, upon the announcement of a cease fire will be the first pop. That will allow things to recover a bit. Then comes the fiscal cliff issue which they will kick into 2013 which will not be resolved even then, cause it can't be. Without either or an escalation in one or the other the fall may even hasten. That light at the end of the tunnel that everyone was told was the promised land and glory coming for the past four years is actually a train, and there is no avoiding the collision at this point.

There were some HnS questions in the comments. This is difficult to write and I messed up the below a bit. There are like 6 scenarios and I just can't put them all into words, sorry. Bottom line is there are like 3 HnS possibilities and were completing the head in all of them is one fashion or another with the RS's being the recoveries or bull traps to come.

Let's clarify as there are several options here. First we came really close to the HnS target for the MINIS (they chart far better and are more realistic than cash IMHO) I have been discussing for the past few weeks yesterday. This move is possibly forming the right side of a head and the restracement will form the right shoulder (which recent history tells us the bears should be very wary of). The neckline for this larger move I think is around 1265. There is another possibility with a rising diagonal neckline. This is all part of an even larger possible HnS formation with a neckline down near 1070 (head completion and then RS forming). I'll have to chart all of this up for you and as they become more prominent I will deliver then.

The Dialy SPX chart looks nasty and does not look like it is making any effort to turn here not even considering a divergence on the MACD histogram at this time. It is oversold, but no sign of a turn quite yet. Bottom line is Potter and Bernanke will have to pull something from the deep dark regions there to intervene. 1374 was my first target and now were here at my second target of 1341. It's on like donkey kong if this level cracks. After the round level of 00, 1265 will be the next stop. We'll find those illusive death stops eventually. 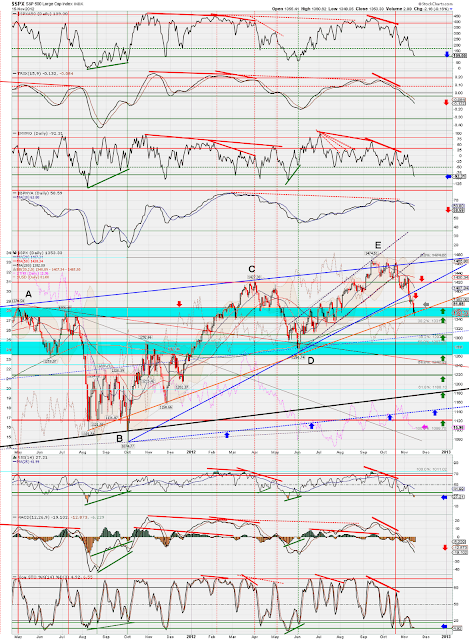