Probably not much gonna happen in the markets till Wednesday. No telling what could blow up between now and then (literally if MR wins and O is put on the street - rightfully so IMHO). Funny to read all the crap about if MR wins this and if O wins that. We all know the bottom line. We all know that the banksters control literally everything, and it really does not matter who is president. They are gonna do what the heck they want, when they want and how they want till they see fit no matter who "the most powerful man in the world" is.

Bottom line is till our bought and paid for government grows a set, we're all slaves to the banking cartel. The last time someone dared stand up to the Fed was in 1963 and we all know how that ended for JFK. What does the presidency mean today? Where did we lose it as a nation? Watch these two videos.

Eisenhower warns us of the military industrial complex

This is where we lost it all. this is where we as citizens failed. "Only an alert and knowledgeable citizenry can compel the proper meshing of the huge industrial and military machinery of defense with our peaceful methods and goals, so that security and liberty may prosper together."

And the epic fail came when they took control of the MSM, "And so it is to the printing press--to the recorder of man's deeds, the keeper of his conscience, the courier of his news--that we look for strength and assistance, confident that with your help man will be what he was born to be: free and independent."

Remember these words as we move forward for this is where we stand today. "It requires a change in outlook, a change in tactics, a change in missions--by the government, by the people, by every businessman or labor leader, and by every newspaper. For we are opposed around the world by a monolithic and ruthless conspiracy that relies primarily on covert means for expanding its sphere of influence--on infiltration instead of invasion, on subversion instead of elections, on intimidation instead of free choice, on guerrillas by night instead of armies by day. It is a system which has conscripted vast human and material resources into the building of a tightly knit, highly efficient machine that combines military, diplomatic, intelligence, economic, scientific and political operations."

As for voting, I believe no matter how you feel about the candidates or election rigging, you must make the effort to get to the polls and have your voice heard. I've struggled with this for a few weeks. I was going to not even bother to go to the polls tomorrow but thought better of it. You must go. Now more than ever you must get out and make some sort of statement. If we can't control things federally, at least we have a chance to control things locally (yes, those are rigged as well I have first hand experience with that here in the early elections). If your vote is not counted your presence will be seen and that is just as important if not more so.

JFK said, "An error does not become a mistake till you refuse to correct it." This is your chance to voice your opinion and do your part to correct the errors that exist. You were, "born to be free and independent" so take that and run with it.

What comes Wednesday is anyone's guess. IMHO, the presidency has been decided for months if not years already. The vast "industrial complex" is in total control. Far far more than at anytime in history have we the people become we the sheeple. We have lost all control and purely exist as slaves to the system now. At least showing up to the polls will give notice that we're watching willing to make a change.

The powers that be pick and place their puppets. Obummer has done a remarkable job for the cartel, possibly too good a job and his time may be up. His being voted out of office may be the thing they need to further divide the country and keep us separated (which is where they want us).

As for the markets, a pretty volatile swing Friday erased the improbable ramp off round level support. The elections will be important to the markets, but in the end nothing will change. CTRL+P will remain the driving force and nothing can stop that now. It is the chosen path to destruction. 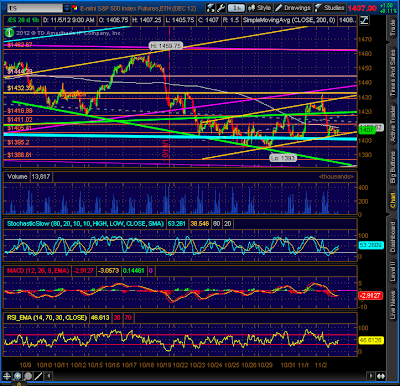