I think I will sum all my thoughts and emotions into one sentence - you better get right with God and fast. The immigrant socialist Marxist that wears the ring that says no god before Allah just won the presidency walking away. The man who skips over the word Creator when quoting the Constitution is in control. Either way you were gonna have a Mormon or a Muslim running the show. God has been removed from the equation now.

We all knew coming into the election that both candidates were basically the same. We all know that the P in POTUS stands for puppet now, so who won (whether predetermined or not) really makes no difference in the long run. Maybe the P should be replaced with a C, as in Czar? Bottom line is God has been removed from the equation and this clears the way for our disastrous future.

What can you expect? Further spending supporting socialist policies and artificially inflating the markets will further devalue the dollar which will lead to us losing world reserve currency. That is the most important issue. The SCOTUS will be lost forever. Social stability will collapse. The police state will expand beyond our comprehension. War is in our near future. Defaulting on the national debt is virtually guaranteed. Your Retirement plans will be confiscated. Every scenario is disastrous.

Face it, you live in a nation where returning war veterans are all immediately put on a terrorist watch list. I believe you will find the real threat to this country lies within it, and the citizens overwhelmingly voted for four more years of this. Do not remove from the realm of possibility that this man might even declare himself king if we make it to the next election. For those that liken this situation to the antichrist,  like I said, get right with God now.

The only positive I can take from this is the american people have chosen the direct route to the end game and not the long way around. That may be our only blessing. I have one slightly hypothetical and sarcastic suggestion, we all stop working and join the freeloaders. Why work to pay for their free ride? (Funny, but we may not have the option to work the way they keep sending jobs overseas) This is the one weakness to their equation. Shall I go back to my Pilgrim speech? Freeloading did not work then and it will not work now.

As for the markets - QE to infinity is guaranteed now. The Benrnanak's job is safe.  Wall St. got the right man for the job (well, either would have been just fine). The lies and illusions will advance uninhibited now till my "event" comes. The fiscal gorge and budget deficits (that's an oxymoron cause there has not been  a budget for years) welcome the new congress. This is about to get ugly. Add to that the Q4 earnings projections and the first quarter has potential for 2008 type fireworks.

Can they hang on thru Christmas is the big question? I'm not sure how a tapped out consumer is going to lift the holiday bottom line. I'm about to go into serious Duck and Cover mode. Till then let's watch the markets closely for some technical signals that this major breakdown that began last month is ready to continue south.

Minis 60m - Apparently reality is alive and well. Watch big blue and the round number. 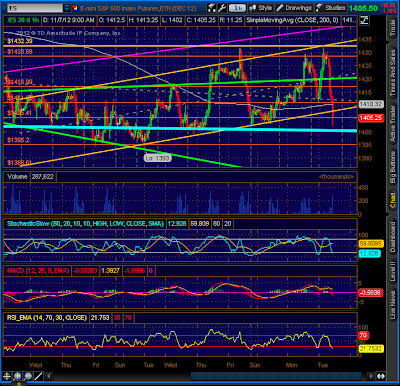