This is just so stupid. Well, everything is truly stupid these days. The extend and pretend game, the implicit belief CB's have to power to solve any problem, the faith that governments serve our best interests and will always be there for us, the belief that piling unmanageable piles of debt on top of already unmanageable amounts will  solve something; it is all pure insanity.

At least we have the Printer in Chief running the show over here spinning growth and stabilization keeping the illusion alive. In the EU they are fractured, disorganized, unbalanced and can not attain the coordination to keep their union alive.

The stress is really beginning to show after the LTRO2 farce bailout pump did not even stabilize things for a month. "Now, two months later, even the members of the European Parliament are openly questioning their belief in the sociopath ECB chief. After laying out the apparent reasons for the LTRO scheme (at a recent European Parliament hearing) to keep banks well-funded, Godfrey Bloom (MEP) describes the implicit reason - or so-called reach-around (sic.) Sarkozy-carry trade to fund governments circumventing Maastricht and article 104 of the ECB's Treaty" Memo To Draghi: We, The People, "Don't Trust You One Inch" | ZeroHedge

In the AD yesterday I asked you to read Tedbits: Tsunami Alert: Send in the Bond Squad; Wolf Wave; Economic Murder | ZeroHedge  to get a true understanding of how bad things are in Spain and Italy. "An underwater earthquake has occurred in Spain and is quite possibly occurring now in Italy.  Killer waves are now headed directly at the central banks and financial systems throughout the developed world and at Europe in Particular."

Spain is dead folks. They could manage Greece, but not Greece, Spain and the fast approaching Italy and the rapidly approaching France (not to mention the rest of the PIIGS and ancillary places like Japan with their 200%+ debt/GDP and Fukushima). See Spanish Economy Crumbles: Unemployment Nearly 25% | ZeroHedge  and S&P Cuts Spain to BBB+, Outlook Negative | ZeroHedge

Pick your poison on GDP reporting - read the real story here - Big GDP Miss: 2.2% Vs Expectations Of 2.5%, Composition Even Uglier | ZeroHedge or you can read the propagandist spin here US Economy Grows at Tepid 2.2% Pace; Misses Expectations - US Business News - CNBC. One would think that they would have to set up a reason for continued easing (which we all know is coming and has to be done). This is a good start.

Are you ready for the real kicker this morning? All that (and the employment miss yesterday) and the futures are UP over 5 points this morning! Things are truly FUBAR folks. There is no other way to describe it. What's driving price? One thing and one thing only, the promise of more easing. the worse the news, the more the guarantee of market levitating liquidity from the Fed. So, the worse things get, the more the markets are pleased. Like a junkie knowing his supplier is just minutes away just around the corner, they are burning thru the last of their stash at  an incredible rate.

Minis 30m - 1406 and that red diagonal resistance (off the 1419 top) is your next resistance point. Above that is only the prior top. Pink diagonal remains the key downside support. As usual I'll tweet and post updates in the comments during market hours. 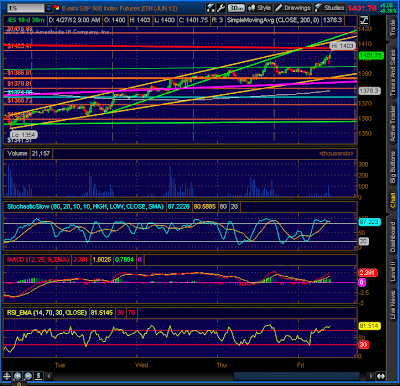 I'll update charts this weekend. As noted, they are set up for a dismal move south across all spectrums. The problem with that (as in every right shoulder bearish situation since 2009) they see the charts as well.

I've been trying to tell you that this time it will take a catalyst, a big catalyst to turn the markets. Look at what they shrug off on a daily basis (today and yesterday being great examples). Patience, form and follow the Fed is all I can offer. Gangsta style, hit and run trades long and short are what we've been reduced to.

The most important thing I can tell you is to get prepared for the worst. It is coming. Total global financial collapse will occur when the derivatives market blows up. Your assets with the banks and investment companies will most likely be confiscated. Get food, guns, ammo, water filters, silver and gold - all the basics needed for self preservation and do it now. I think we have a year at best now before the collapse. If Obummer gets reelected, less.