Fluff and puff, that's was what was to be expected and exactly what you gotr from JPM's earnings. JPM Earnings Beat Courtesy Of $0.28 Benefit From Loan Loss Reserves Despite First Increase In Nonperforming Loans In Years | ZeroHedge. Just like Repo 105 had its quarter or two in the spotlight assisting in the earnings ramp, apparently CVA's have gone their way and now a reduction in loan loss reserves is the pump cause flavor of the quarter. What financial voodoo they pull next quarter is anyone's guess.

Late yesterday and last night were pretty busy news wise. You had a GOOG beat, a China GDP miss, more positive QE rhetoric and Spain CDS exploding again. So you have a mix of the bad and the (what they want you to believe is) good (that's not). Earnings continue, FOMC meeting (QE rumors) in less than two weeks and Spain will be the dominant market drivers for the next two weeks. Here are some key earnings to note in the next few weeks.


C Monday before the open
YHOO and IBM sometime, GS, JNJ KO before the open and INTC after the close Tuesday
HAL before and YUM after Wednesday
BAC before and MSFT after Thursday
MCD before Friday
AAPL sometime Tuesday the 24th in conjunction with the FOMC meeting.


Minis 4hr - Bears better get it here or else another epic fail at a bear run will be upon us again. STB had been warning about the 1386 neckline backtest. I would not mind 1400 being seen again, but for form's sake, this should be the point for short entries and the start of a move to 1341where another hopeful neckline lies. I'm not saying another QE ramp can't or won't happen, but this, if the bears are on their game, should be it. Green wedge support near 1373 will be tough to crack. The number on the downside you need to be most concerned with is the pink LT support diag near 1359. (Note possible Shanky Spot Monday at 8:10 at 1359.) 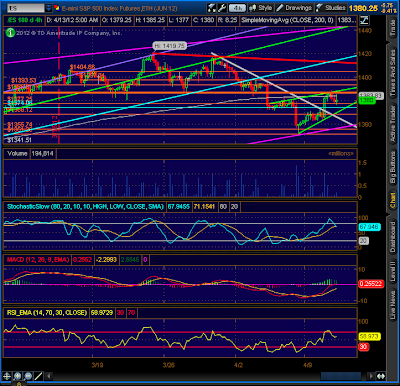 BTFD Chart - Yesterday in the comments I warned that my newly named BTFD chart (Formerly the ROC/NTMO Daily Chart) was indicating a possible turn. If ROC hits the green buy line then a bigger pop may be expected. 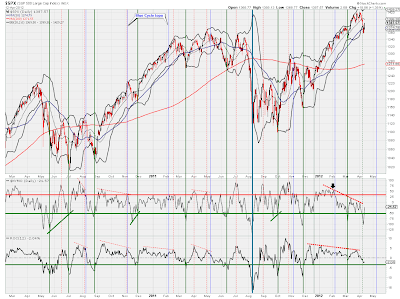 Financials comparison chart - Sadly I ignored this chart and the turn it implied. I know I warned about it, but I should have been more emphatic in its translation. The plethora of bear flags I am not ignoring. JPM is obviously a massive out-performer. The other TBTFs have under performed the index dramatically. 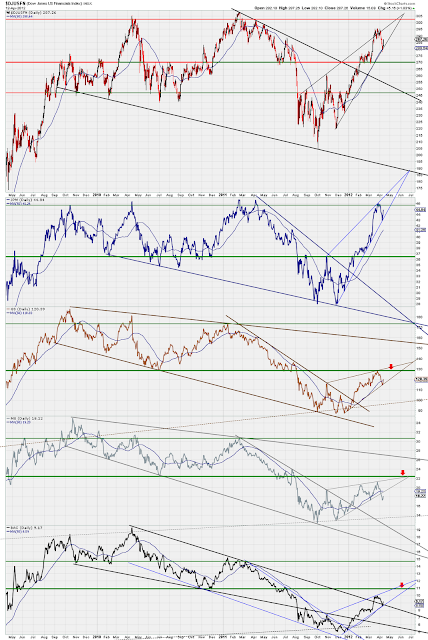 Patience, form and follow the Fed. Right now I'm looking for a double top at 1386 and at worst a 1400 backtest. Round levels for all the major indexes are in play and you need to keep an eye on those levels. Could be an interesting weekend, but I'm focused on the 24th and 25th when AAPL reports and the FOMC meets.