Well, well, well how bout that pop from 1359 to 1374 resistance overnight. Nothing like going to bed at the doorstep of hell only to find you wake up the next morning three blocks away in a safer place. Once the EU markets opened everything took off. I guess all is well and that Spain thingy is just nothing to worry about. The YPF (Your Portfolio is Fucked) takeover was nothing that should be of concern. Just a bit of nationalization going down. That stuff happens all the time.

Folks, I wish I could come up with some slick ass poetic and over the top explanation for why the market does what it does, but in reality there is none. All these windbags tout correlations and currency movements and betas and alphas and historical this and that and theories and on and on. That is all irrelevant today (like the VIX). This market is a centrally planned crony capitalist system the relies solely on how much liquidity is fabricated to keep it alive. Movements are coordinated at the top and nothing happens without prior approval from the Fed. It is a bullshit system that is run by computer algorithms and over sized margin positions that tilt everything one way of the other. It is a lopsided mess with AAPL making up some unrealistic weighting.

The only constant, the only magic bullet that is left is technical analysis which will eventually deliver the top to you on a silver platter. The problem with TA is all the manipulation mentioned above. Much like the 2010 and 2011 tops, patience, form and following the Fed will deliver the best results. When they turn the fiat machines off the market will turn and there will be a massive divergence in the indicators and embedded overbought conditions as there have been in the past (just like on the monthly now).

So we have G20, G7 and FOMC meetings coming over the next seven days. And the odds of bad news coming out of one of those is slim. ZIRP to infinity is one guarantee. Bankrupt or debt ridden nations deciding to continue to fund the debt of other bankrupt or debt ridden nations is another. The rumors of QE and or more stimulus and bailouts till infinity will be rampant and the markets will react in their rampant form. It is pure insanity!

What caused the market to fall this past week? Simple, all the Fed hawks came out in alignment with the BLS BS data and said we don't need QE and if we do it will be a bad thing. That was all there was to it. The simple threat of removing liquidity. So after a 70 point slide in the SPX someone started screaming cause their portfolio was falling apart and out come the Fed doves promoting more QE and magically the markets stop and levitate once again.

STB had been pointing to the 24th and 25th when AAPL earnings release and the FOMC meeting is in session. The EU meetings this week will be very important as well as these remaining earnings events. GS and KO beat already.


YHOO and IBM sometime, GS, JNJ KO before the open and INTC after the close Tuesday
HAL before and YUM after Wednesday
BAC before and MSFT after Thursday
MCD before Friday
AAPL sometime Tuesday the 24th in conjunction with the FOMC meeting.


Last night's AD was titled Near Death Experience. That was because we did go to bed at hell's front door. The pink support diagonal and the one I showed on SPX off the November lows is it. that is the line in the sand separating bull move from bear transition. Lat night the market began to dip right before the EU opened and magically and miraculously something cured all ills and 14 points later to the positive here we are back at 1374 resistance. What changed from the dire news that relentlessly pelted your computer screen all day yesterday? Nothing. 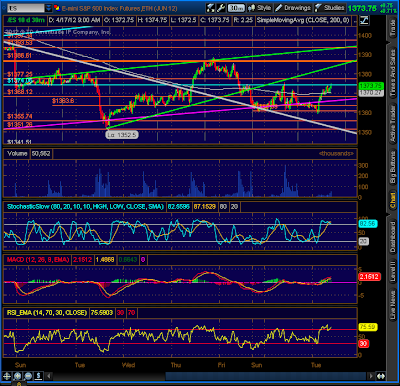 All the lines and targets are on this chart. Up or down you take your pick. I'm in a holding pattern till something breaks or till the 24th and we're thru the crony elitist meetings that will decide the fate if the markets. Above 1377 there is a big hole to 1386. Below pink support there are 4 price support points and the white diagonal. Don't get me wrong, I'm all over some sort of top here, you just have to be (say it with me now) patient, watch form and follow the Fed. STB has been waiting for a catalyst and if the news recently has not taken price thru support I'm not sure what it is going to take.

I'll deliver more charts when the time is right. I tweet a lot of charts as well.