You know the drill, share the love and the knowledge.

Warning, this post is not meant to ruin your weekend, but to wake you up.

Want a taste of reality in America. Something some of the readers of this blog never experience or see. Want to know the Democrats big secret and who Obummer's biggest supporters are?

We must stop the entitlement system!

After this post "Your EBT Card Has Been Denied": 700,000 Are About To Lose Their Extended Jobless Claims Benefits | ZeroHedge I gots ta scrap aroung YouTubes ant foun dis - Warning! Try not to throw something or throw up after watching this.

Free everything BITCHEZ! And the more kids you have the better!

First this explains the EBT, bottom line, "Who would want to work in America. This is what the taxpayers are paying for" (Section 8 is free or subsidized housing).

Then it is as simple as, "All you have to do is Ohh, Ohh and nine months later you are getting the big bucks!"

Remember that commercial with the frying pan and your brain is on crack saying - this is your country on free welfare out of control. How are you gonna stop it? How do you stop a culture that has been raised for generations now to leach off the system, that is is fine to do nothing but sit around and do drugs all day and fuck and have kids which only increases your chance of becoming more wealthy? And no wonder Barry is the perfect president. This is bullshit!

Angry? I'm beyond angry. These people are not sheeple. They are parasites. Productive, shuh, at fucking and having babies and being leaches on the system basically stealing our money is all they are productive at. This is waaaaaayyyyyy messed up. And to think I discuss the coming race riots and some dis me and think I'm crazy. When their benefits go away these people are gonna go nuts.

Work for a living? HAHAHAHAHAHA! That will be compared to a return to slavery. These folks are getting their reparations in spades and do not intend on doing anything but be a leach off the system for the rest of their lives and then their 15 children and then their 15 and so on - care to do a bit of exponential calculations and you will come to a rather nasty conclusion - then add that to the state of the nation and, well, only two words come to mind, EPIC FAIL!

UPDATE - This came out after I posted this -

FoodStamp Nation | ZeroHedge  "But what does it mean when 20% of all households cannot afford to buy the food they need for their families?  To our thinking, it highlights an underappreciated new facet of American economic life – one that will be felt everywhere from the ballot box to the upcoming Federal Deficit debates." This is a must read.

Minis 60m - and where did they close it? Think PINK! 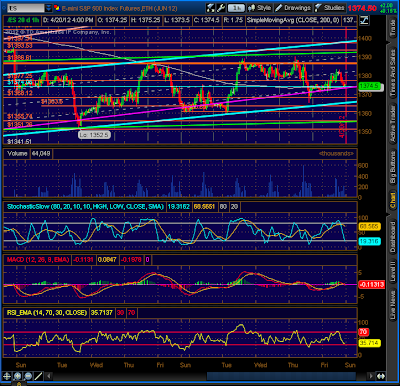