The answer was made clear yesterday that the Fed stands ready to ease at any cost (not any sort of surprise there). Again we heard about the Fed being prepared to take more balance sheet actions, tools available and ZIRP extensions to control inflation. What was most interesting? There was no market reaction (STB is still perplexed by this).

Where was the standard 20 point celebratory ramp? The wording from the Chief of Fiat was strong enough to solicit bulltards from all over the planet to act. Maybe they all shot their wad on AAPL and were not ready for round two. The Europeans were pleased. They opened up knowing that their future looked as bright as a burning pile of fiat could get. In other words, they got the all clear.

That was short lived as reality snuffed the flames and back to earth their markets fell. Reality sucks and Germany is staring it down right now. To Wiemar (print to death) or not to Wiemar (not print and die anyway) is the bridge they must cross at this point. They have fought hard to save the EU, but the monetary union is beyond repair. They can't keep the charade up much longer and critical decisions are coming sooner than later.

Enter our newest dilemma. Are the effects of QE (and/or the rumors of) meeting diminished returns as STB has spoken about for some time now? The markets were not all that giddy at the promise yesterday. Maybe, just maybe, the markets are starting to figure out that all this printing is not such a good thing. Maybe the debt levels and lack of any real 'improvement' from the Keynesian policies is beginning to sink in.

Speaking of lack of improvement, on the jobless front I'll just give you the whole take from ZH Just As Predicted, Initial Claims Miss Huge, Yet Magically Improve. I can't word it any better, "Recall what we said less than an hour ago: "what will most likely happen is a print in the mid to upper 380,000s, while last week's number will be revised to a 390K+ print, allowing the media to once again declare that the number was an improvement week over week. In other words, SSDD." SSDD it is: last week's 386K number was revised to 389K, meaning the massive miss relative to expectations of 370K last week just got even worse. This is the 10th week in a row of misses to the weaker side and the 16th of the last 18. And while this week's miss was whopping as usual, with expectations of 375K being soundly missed after the print came at 388K on its way back to 400K, the media can sleep soundly because the absolute lack of BLS propaganda means that the sequential progression is one of, you got it, improvement. In other words here is what the headlines in the Mainstream Media will be: "Initial claims improve over prior week." In fact here it is from Bloomberg: "U.S. Initial Jobless Claims Fell 1,000 to 388,000 Last Week." Absolutely brilliant.No propaganda. No data fudging. No manipulation at all. Just endless laughter at the desperation.

Minis 30m - Claims combined with misses from UPS and XOM this morning have forced futures down to Pink critical November support. Things are really knotting up with the convergence of critical support and resistance. It looks to me like something is about to crack and their plans to boost the markets yesterday to a new altitude failed. 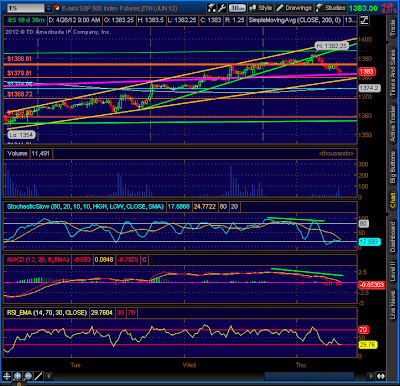 SPX Daily - The dailys were set up for a pop with slight positive divergences coming into the lows Monday. My BTFD Chart was spot on for the mini ramp as well. 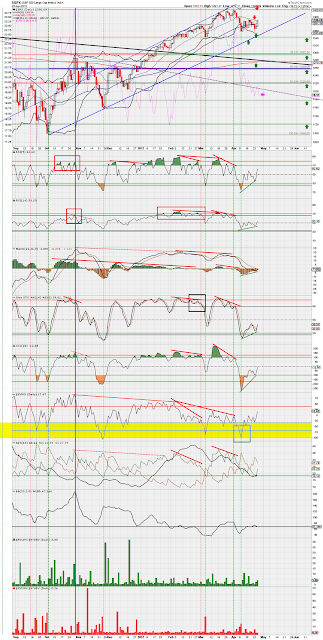 The weakness here has me a bit perplexed as the technicals say the markets may want to run a bit more, but they are not taking the open door provided them by the Fed yesterday. Yes, we pointed out the 30m rollover yesterday and this may be just that playing out, but I'm questioning that. This plays into the overall theme I've been working for a few weeks now, that is that something bigger to the downside is brewing. You name it, pick a chart, they are all positioned from FX to whatever for a major event.

I have been discussing the past three tops and the trend for a first move south and then the bull trap run to a higher high. We're set for that here and should be running now but aren't. The crumbling Bullish Percent is setting the table. If we could only get the bulltards to do their part now we can then set up the slaughter. 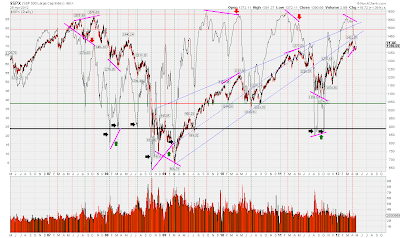 1381 is your first key support on the minis. Then 79 and 74, beyond that and it may be duck and cover time and my 1341 call is back in action. the markets are acting as if something is not right. They should be running here and are not.