The end is near. Growth happens till it doesn't and then Wall St starts setting lower hurdles to perpetuate the lie till that does not work any longer. That is the new peak  life cycle theory developed by renowned chartist, part-time economist, blogger and master bullshit artist Shanky (me).

Seriously, you all know that is how it works these days. Traditional economics can be thrown out with the baby and the bathwater (which it is becoming acceptable these days the trow the baby out, but heavens don't waste that water!).

Wall St. analysts (I say this every quarter here) are rigging the game. Normally (pre-QE when things were real) if an estimate was lowered price would suffer greatly. These days (with easing - pick your favorite flavor) estimates are lowered and price does not react at all because easing lifts all tides. This creates an artificially low hurdle and the easy beat to perpetuate the HFT/Algo driven, liquidity fed, Wall Streeet/Fed/Treasury farce manipulated POS market we deal with today.

OK - now forget all that and let's focus on AAPL. Yes, the company named for the fruit that got Adam and Eve banned from the Garden of Eden. Have you had your AAPL today? Do you partake in the forbidden fruit? If so (as an investor not a consumer) you may be about to banish AAPL (the other way around this time) from your garden.

Growth is good till it becomes incestuous. Us folks here in the deep south are paying the price for that right now, so listen to someone who knows about this stuff. Original, organic growth is one thing (you have plenty of cousins to do it with) but when the markets become saturated (you've done every cousin you got) and replacements drive 'new' sales (you start doing Sally Mae over and over again), that's the end of the productive growth phase.

AAPL is a different beast as you all know. AAPL represents like 999% of everything. What has Wall St and the incredible success of the forbidden fruit done to expectations? "As Colin Gillis of BGC Partners notes, "Apple will need to smash records to keep momentum" as surpassing the $9.98/share by 20% is an impressive feat indeed as they point out that seven of the nine times Apple's shares have fallen the day after earnings has been when earnings beat by less than 20%. Performance anxiety indeed." Apple Angst As Expectations Remain Extreme | ZeroHedge

Folks, down here, that's like getting it on with your cousins Mary Sue, Sally Joe and your Aunt Bee at the same time while smoking a Marlboro and drinking a cold PBR. That ain't happenin and if it does it won't last long (cause the ladies will be a fightin fer yer 'attenchin').

That said, I think you get where I'm going with this -

AAPL Monthly - If this chart does not make ZH I'll be uspset. Death? End of story? does a bear poop in the woods? Can Sally Mae suck a golf - sorry - (yes by he way) - Anytime you see a 10 year rising wedge (bearish) overthrow resistance in a blow off top (bearish) with a triple divergence in the indicators screaming a blow off top is happening and price runs vertical you know there's trouble (Think Uncle Joe comin fer ya with his shot gun after that episode with his two daughters and your aunt earlier). 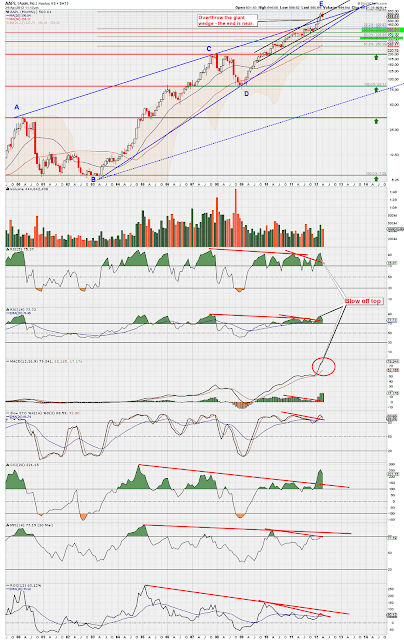 The last two quarters I was smart enough to recommend that investors wait on earnings and remain patient (cause QE was still a happenin). This quarter you need to be a bit more cautious cause all the stars are alignin fer sumthin aspecial. It may not be this week, but I've been discussing this for some time now. Patience , form and follow the Fed (Twist ends in June).

Want a target? 400 to 390 is first support and the first group of fib confluences is the first most obvious point. Let's not start putting any carts ahead of any horses (that's like getting behind yer cousin Betty Sue - and that's not gonna work out too well - it will with others but not that one). We still have BLS BS, QE/Twist/LTRO rumors and a plethora of other 'influences' running this unregulated POS they call a market.

I think the forbidden fruit has topped, but you can not rule out one more run or a double top. We'll know more this afternoon on that. Remember, there is way too much money riding on this pony, so it may not get whipped too badly out of the gates here. The hedgies and CB's still have to get their exit plans in place and figure out how to dump this overpriced behemoth on the backs of the sheeple. Good luck with that.