AAPL is all that matters today. I will do an AAPL chart post after the opening bell. Hint - E touch/overthrow of a 12 year massive giant wedge is never a good thing. The end is near.

Well, here we are. After preaching patience and weeks of earnings and waiting on the FOMC meeting, my days of reckoning have arrived. Tomorrow is a big one as well, but maybe the Fed will play their hand today.

Minis 30m - Busted pink November support was a big deal yesterday. The backtest of the more recent channel (yellow) is now complete. Can they stretch it back to 1378/80 ares for a backtest of the pink diag? This chart has all the key support and resistance points on it. Remember an even bigger deal is that lower green support diagonal which is what I am seeing as a neckline of a head and shoulders that targets the 1290 area. 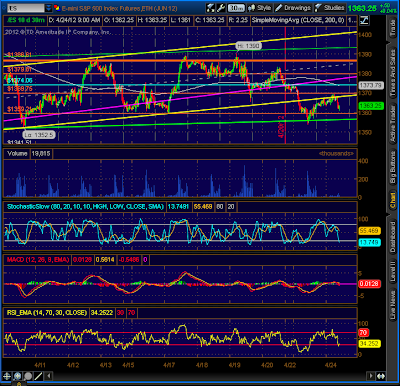 I expect the focus to be domestic today with AAPL and FOMC, but do not forget that the first domino lies across the pond. It Took The Bank Of Greece Only Three Weeks To Revise Its 2012 GDP Forecast Even Lower | ZeroHedge "A few more such comparable downward revisions, and the Third Greek bailout (Of European Banks), which is due any second now, may be jeopardized (as it will be more difficult to sell to Germans why they are once again bailing out French banks)." In case you missed the joke, insolvent countries are getting tired of printing money to bail out other insolvent countries. That works backwards as well.

As STB has been telling you for quite some time, Greece is the AIG conduit, like after the TBTF bailouts in '08, the bailouts do not stop or stay in Greece (they actually lost money on the last deal). The funds flow thru Greece to the banks of Italy, France, Germany and others to keep the system afloat. It is stealth bank bailout. Greece is nothing more than a dead corpse strapped to a live support machine. At some point soon, the printing will stop and that is when the music stops and that is when the markets stop.

Something is about to happen in the currency markets.

Dollar - Critical long term support at the end of the wedge. 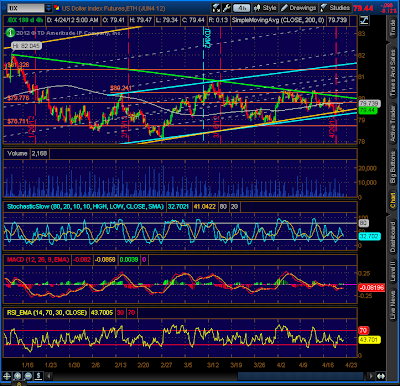 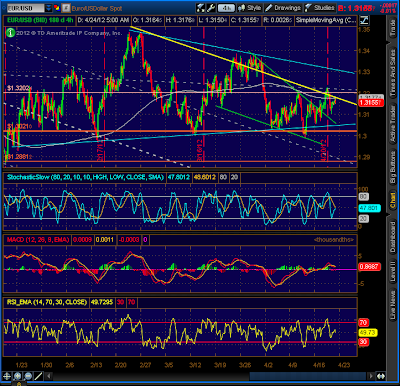 AUD/JPY - Even this pair is at long term upper resistance and showing a potential reversal. 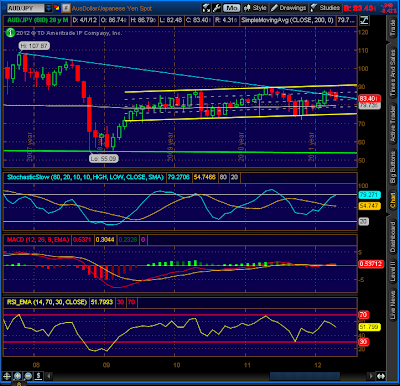 As noted yesterday, all the charts are aligned for a major 'event'.