OK, FOMC day. Let's see what they got. Nothing else matters as we all know it is all about the Fed (and AAPL) and nothing else.

The news remains dire across the pond. UK Economy Double Dips For First Time Since 1970s (which any realist knows we never recovered or left the recession that ended in 2009). Add to that, "Earlier today, the Bundesbank tried to sneak through some EUR3 billion in long-dated (30Y) paper. It didn't quite succeed, because if one excludes the retention by the German bank which already has its hands full with TARGET2, the auction was technically a failure. German 30 Year Bund Auction "Unsubscribed" | ZeroHedge and you are forced to conclude that the financial crisis in the EU is about to take another step towards the fire.

Over here things are not so hot either. Don't be fooled by the BS BLS data manipulation or the CB/Fed speak that all is well. I'm not sure if the Fed is going to be able to avoid this one. "the March durable goods data comes in and it was a complete disaster: instead of dropping modestly by 1.7% as the consensus expected, the March actual print was a massive 4.2% decline, worse than the worst Wall Street forecast, or the most since January 2009!" March Durable Good Implode, Worse Than Lowest Wall Street Forecast And Biggest Drop Since January 2009 | ZeroHedge

And that brings us to AAPL. Their beat was of historic proportions, but as TD at ZH consistently points out (and as I warn the bears here every quarter) the games that Wall St. analysts play can be quite deceiving. "Is this just the usual lowballing, or is it for real this time?" Apple Beats, Guides Lower | ZeroHedge I think it is for real, but that does not matter as revisions lower into Twist or QE do not matter as ships do not sink these days no matter how much damage to the hull (unless they are Italian of course).

Minis 30m - As I always warn after any support is busted, you look for the backtest first. Yeaterday they backtested the busted yellow channel support and this morning the busted pink November support is being backtested. The green HnS neckline test yesterday really brought some drama to the game.

Could the dreaded right shoulder launching pad be in play here again? No telling as the Fed speak will determine everything today. One thing is for sure, just as the neckline held yesterday we are at another key technical point. What happens at this backtest? If price fails here, it should set up a brisk and gappy move south. 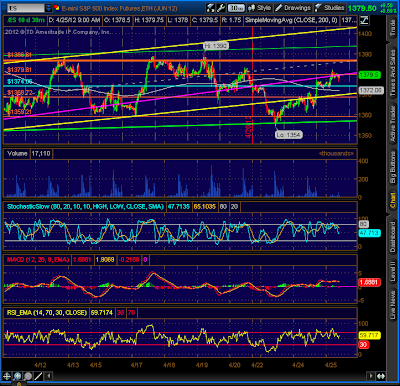 As noted earlier, the past three major tops all included a dip that led to one last run to a higher high and then failure. Twist does not end till June. This is something that the bears need to be wary of. Yes, I am very bearish and the charts are all adding up to a major event every soon. Can this event take a rigged market down while easing is still in play or is the event the coming end of Twist?

FOMC Chart - Note the next FOMC meeting is in ...June.

Patience, form and follow the Fed. that is all you can do. Gangsta style, hit and run trading while scalping long or short is what we've been reduced to. Stick with it for now. I believe we'll all see the top when it is set. Don;t pounce till then.