Based on the propaganda this morning it appears all is well in the land of unicorns and fairy tales, so I will just move along to the charts. Never mind any of the headlines on the Economic Collapse blog, they are just pure fear mongering and should be ignored. Let's just roll with what the state tells us today and be good little sheeple shall we? I'll let the charts do my talking this morning.

Daily SPX - Negative divergences continue to worsen and extend their run. Overbought, overthrown and basically over everything, the markets are in a very dangerous spot. Technicals schmechnicals, the Fed has everything under control and 1600 is just above and in their sights. We all know they can't let the markets even correct normally at this point without causing major panic, so expect more of the same till it isn't. 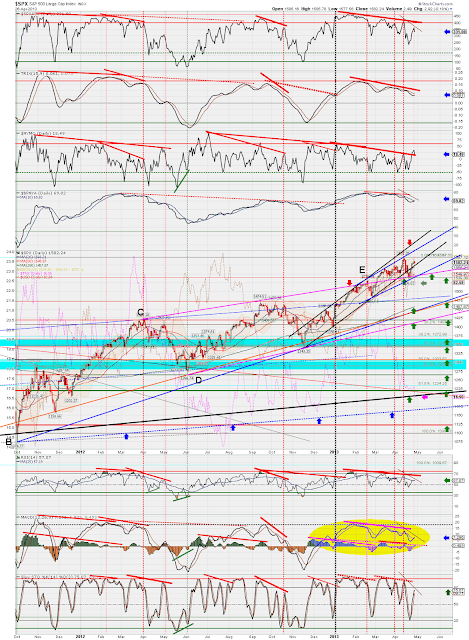 Minis 60m - Here is the deal - near term blue channel support is supporting price driving it up into a wall of three older resistance diagonals. Price is getting pinched here and it will have to break one way of the other. Today or in the morning we'll know what the result will be at the coming inflection point. 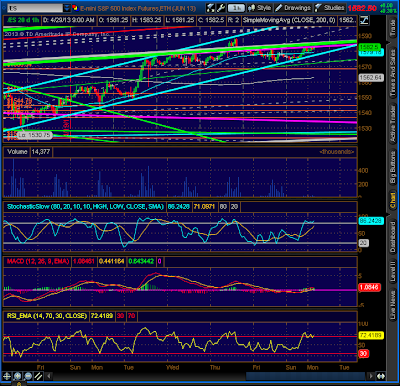 I'll cover more on the support and resistance points below as the day goes by. Bottom line is there is a massive hole under price here and any turn could be severe. Not sure what could drive this turn, but TA usually has a nasty way of predicting events. This would be a good time to be expecting one sooner than later.