What's so sad is that the steam is picking up from the government's end on the nanny/police state development. It sickens me to think of the world my children will inherit and the lifestyle they will be forced to live compared to what I have been able to enjoy. Something about them eating GMO foods and living in a totalitarian state dominated by corporate interests serving as a debt serf to further their survival does not really appeal to me.

The Boston bombing was a horrific incident. Skipping the who dun it, Craft security everywhere, unconstitutional home invasion, armed forces everywhere searching for a 19 year old part of the story; I'll fast forward to the constitutional rape that will come out of this mess. Other than the mass calls for more gun control and the other idiotic whining coming from DC, the worst thing I have seen came yesterday afternoon when none other than our last ray of hope for liberty Rand Paul delivered this,

""I've never argued against any technology being used when you have an imminent threat, an active crime going on," Paul said. "If someone comes out of a liquor store with a weapon and fifty dollars in cash. I don't care if a drone kills him or a policeman kills him.""

When the last lovers of liberty and staunch supporters of the Constitution start to fall, you know the end game is near. Rand, are things so bad in DC that you have had to join the dark side? When Rand endorsed Mitt, I thought something was up and now this? 2016? I don't think so. Not after this.

If you missed America: #1 in Fear, Stress, Anger, Divorce, Obesity, Anti-Depressants, etc.. you need to read it.

"The following is a collection of facts and statistics that prove that America is being absolutely consumed by fear, stress, anger and depression..."

We discuss social mood, awareness and such in the comments below almost daily sharing our experiences with the public. It appears to me that the public is finally beginning to internalize the economic crisis and the effects are beginning to show. After years of denial, it appears the stress of losing the easy route the entitled masses are waking up from their medicated slumber to find that reality is not all it appears to be.

So what happens when they all awaken and find that the banks have stolen everything (as in everything)? Now you see the need for the mass expansion for the police state and the likes of Rand Paul selling out to the corporate elite. May I remind you that you are an American and not a terrorist.

We're clearly, in a historical technical perspective, in a topping process. That is reality. What is not real is the total control the Fed and central banks are exhibiting over the markets distorting reality. I have no comments on AAPL.

SPX 60m - Sadly almost every right shoulder in the past four years has proven to be a launching pad. 1600 is just above and for now they have fended off a massive technical reversal formation. Patience - and wait for the "event" that is all you can do. 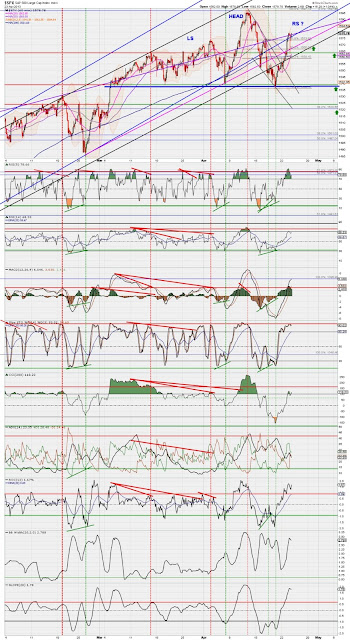 Minis 60m - There are four possible formations here. the two most important are either a rising megaphone or rising channel. Either way price is meeting serious prior resistance diagonals at the 1577 level. 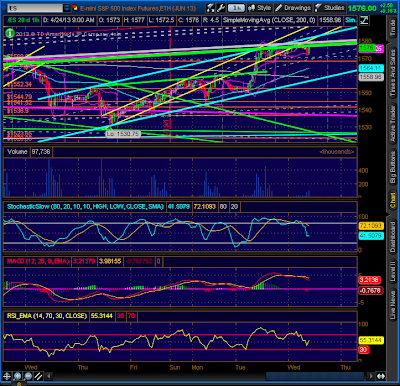 On my disclosure theme - I suggest you listen to this C2C interview with Steven Greer from last night on the premier of the movie Sirius Disclosure.

As usual - more to come below. Over 360 comments yesterday may have set a new STB record. Jump in and help make a difference. Share the love and the knowledge.