OK, let's address the Marathon incident quickly. I say quickly cause I need to digest this more, catch any leftover facts and want to let this event settle a bit before incorporating it into the bigger picture. First and foremost prayers go out to all that were involved in the incident and their families. It is tragic that senseless events like this happen, but welcome to the world we live in.

First, where does this event fit into the bigger picture? At first glance this is a non-financial event although it did happen in a financial center, so it is not an or the STB "event".  It is an event that "they" will capitalize on however. This will most likely be the event that catapults the DHS into every sporting event. I'm sad to say, but the South Park TSA episode may not be too far fetched. This is an event that they will use to expand the police state dramatically.

False flag or real? Tough call at this point. We all should have our suspicions at this time. Patriot Day in Boston, the day gold fell off a cliff (or was it pushed?), the day the markets fell hard from the top, Japan's bond market issues, several devices that did not detonate and several other major factors were all temporarily erased from our memories by this event. STB has discussed  numerous times "distractions" and events that will be designed to galvanize the nation preparing us for what's to come.

Sadly, this was a minor, baby event. This was nothing compared to what is to come I hate to say. I think it is possible that we will begin to see a series of smaller events like this spring up around the country building fear in the public. These events will lead to an even further expanded police state. This will lead to an even larger single event that will basically have us (some of us) begging for total police control. I believe this will be the blueprint leading to the great confiscation of the retirement system by the big banks.

Who did it? Well, if a single troubled teen, a kid that played COD, was an outcast in school and was one several medications, then you know where I will lean on who was behind this. If they catch this person rather quickly that will add to the inside job theory. If a "patriot" did it then that will give the gun grabbers even more impetus to destroy the constitution.

Bottom line is distrust for the government is at an all time high now, and I believe it is for a good reason. The first question at the big press conference last night went something like, "was this an inside job to expand the TSA groping abilities". I was blown away when I heard this. Sure that sounds rather distasteful, but was it really? Today that has become a valid first question with the questions surrounding 9/11, the rise of the police state and the corporate dominated socialist government that no longer serves the people.

On to gold - A absolutely MUST READ piece from Paul Craig Roberts is the Assault on Gold Update. If you want all the dirt explained where anyone can get it, this is the post to read. This post takes you deep into the gold/currency manipulation and leaves you really wondering, can this really be happening? Where is the gold? When did it leave? Who had the backing to make such a trade? You have to read this post. I will do a separate post on gold and silver later today.

"I see the orchestrated effort to suppress the price of gold and silver as a sign that the authorities are frightened that trouble is brewing that they cannot control unless there is strong confidence in the dollar. Otherwise, what is the point of the heavy short selling and orchestrated announcements of gold sales in advance of the sales?"

Minis 60m - STB has been red hot on nailing some of these falls and the support points. The charts will give you the answers if you have the proper s/r, diagonals and formations in place. Yesterday I gave, "The resistance area near 1587 held and now price has fallen back thru near term support and is on its way to visiting 64 support. If that does not hold then the lower 40's will be the next stop." And where did it stop after a brief pause at 64? This is a chart from the STB travel computer. 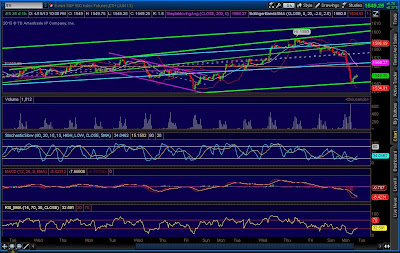 Minis 30m - The minis this morning have recovered nicely (who'd a thunk it?). I'm gonna delete the lines on this chart and basically start from scratch later today. It has gotten too busy and while every line tells a story, it is time to start anew. The backtest of the pink diagonal was the stopping point yesterday. 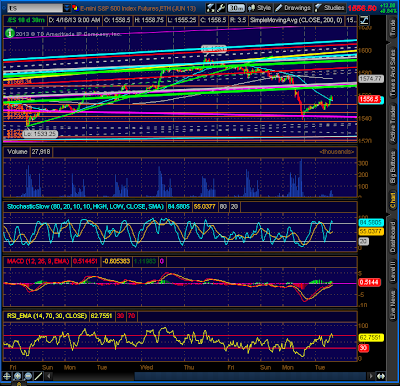 For the astute viewer, the pink diag in the lower chart is not on the upper chart and the green diag on the upper chart is not on the lower chart. they are the same minis ToS charts but drawn on different computers. So, both formations are correct and I suspect there is an STB point there. This is part of the reason I will be blowing up the STB work chart later today and drawing a new one.

SPX 60m - I showed all of the support on this chart yesterday in the comments section. It held for a while and then most of the support got obliterated late. 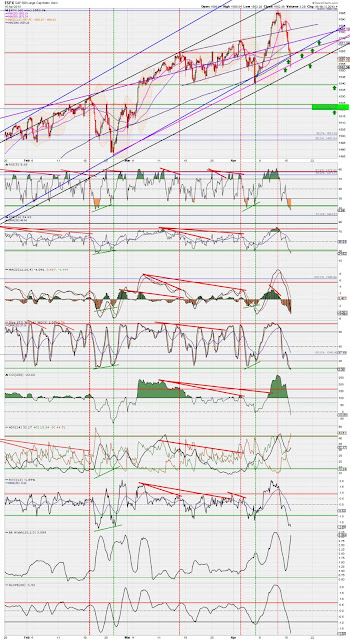 Daily SPX - This chart has been more than dire for several weeks, but as noted yesterday the backtest of the negative divergence diagonals (thus indicating even further weakness) against new all time highs was a really bad thing for the markets. 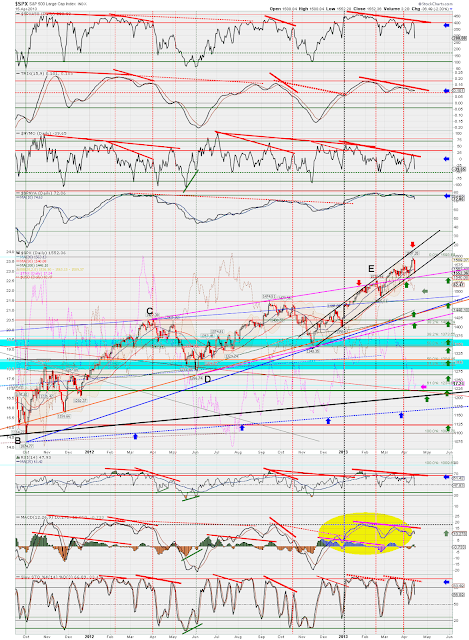 We're not out of the woods by far folks, but be reminded after the LEH incident in '08 the SPX still had another 150 points in her. Now, she was still chasing an old top or a new high then (much as she may be chasing 1600 here). I'm really tempted to get this top call out of the way and may very soon. This is part of the reason I want to blow up my minis chart and make sure I have everything in order.

I really need to do a chartapalooza. It will blow your mind. Folks, this gold deal yesterday was really bad. Read that PCR post. They are deep, deep, deep in trouble. The timing of the marathon incident yesterday with that move in gold is quite questionable. We're moving closer to the end. Traders need to remain patient and vigilant. The end is near.