Happy Tax Day everyone. Yes it is the time of year that we good citizens donate a large portion of our hard earned dollars to support this (once) great nation. It is time for them to collect so the good the government does can perpetuate. Just  think of all the wonderful entitlement programs, the exceptional education system and the support of all those wars we are fighting your fiat goes to sustain. Without this the EBT toating, baby pumping, dope smoking, Escalade driving (think spinning rims), 60" TV watching democratic voter base would not be able to experience their God given rights as free loading Americans.

Never mind that budget thingy they keep discussing or the fiscal cliff that still exists. Never mind that they take in $2 trillion, spend $3 trillion, have $18 trillion in debt and have over $120 trillion in unfunded liabilities. This is sustainable for sure. Ceiling? What ceiling?  They have things well under control and austerity, capital controls and deposit confiscation will never come to this country. That "can't happen here".

Forget that the Fed prints and spends $85 billion a month to support ....well... everything. Never mind that we are the number one holders and purchasers of our own debt. Financially this country has never been in a happier place, all cuddled up in the cozy and safe arms of the Fed.

May I urge you to look closely at the US National Debt Clock.  While looking at that note the official unemployed is 11m and the actual unemployed is 21m. The other fact that stands out to me is that of the 315m living here 50m (17%) live in poverty.  The unfunded liabilities is on the bottom line. Feel free to point out your favorite observations in the comments below.

Hear that ticking? No that is not your circa 1980 Garfield clock on the wall. It is the global financial time bomb. If it sounds out of sync it is because there are multiple ordinances spread across the globe that can set off the imminent financial destruction. The one ticking the loudest this week is Japan. The country sporting the largest debt/GDP ratio (200%+) and with the greatest propensity to ease .....on/off/on..... is having some slight issues within its bond market. They can't seem to keep it open for long periods of time. Of course this should not concern you one bit.

I suggest you view "the drastic change in investor positioning in Japanese markets." Apparently we're about to get a real lesson in what too much free money can do to a stock market. Of course things here are different and that, again, "can't happen here". Maybe when an Ex-Soros adviser dumps almost all his exposure to Japan and gets short the bond markets someone should pay attention. Some would call this financial fear mongering. This man is a kook!

Never mind the above. All is well. Our government takes in enough money every year to support 66% of its spending. We can continue to finance the rest and mortgage our children's future making them perpetual debt slaves to the system. We really don't have a debt or spending or any real economic issues that can't be overcome. Our government is doing a great job. Look, the stock market would not be at all time highs and all those free Obama phones would not be everywhere if all was not well. So relax, they got it all under control.

Daily SPX - Almost identical set up to last April that led to an 11% correction. Of course that was before the Fed entered the recent period of unprecedented market manipulation. Last week I told you to look for the backtest of the diagonals in the divergences of the indicators below the chart. These negative divergences continue to deteriorate as price continued to rise. This folks, is a very very nasty set up. Like "as bad as it can get" set up. Flack jackets and helmets are required gear at this point. 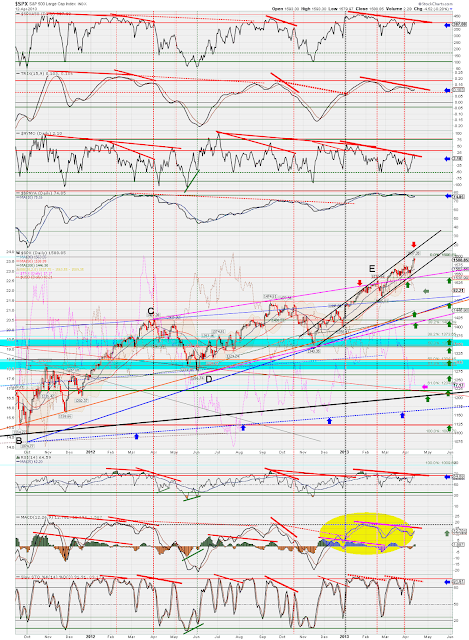 Minis 60m - The resistance area near 1587 held and now price has fallen back thru near term support and is on its way to visiting 64 support. If that does not hold then the lower 40's will be the next stop. They (team manipulation) have left some massive supportless holes under price there. 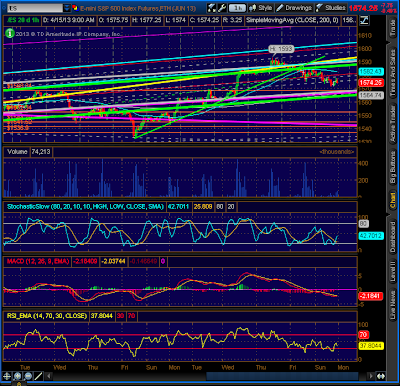 The catalyst has been set (Cyprus). Now all there is to do is wait on the "event". Patience folks. They can't keep this juggling act going forever. Sooner than later a few balls will hit the ground and when they do, look out. I will warn that we are still early in earnings season which could add to some of the distortion of reality.

More to come below as usual. I hope you caught the sarcasm in the post above. If you did not, I'll say a prayer for you later.


How bout that finish in the Masters? I hope you were watching. Easily one of the best sporting events every year.