Bank earnings - SSDQ - ESP beat, revenue miss and earnings supported by loan loss reserves. Who could have seen that one coming? Do we really need to discuss this or what's coming the rest of earnings season any further? Revenue misses quarter after quarter for many years should eventually weigh on the system, right? I mean revenues ...... never mind, I totally forgot about the new economic paradigm where fundamentals don't matter anymore.

Meanwhile back in Cyprus .... They made a slight math error in the total bailout number. It is closer to $30 billion now. "Sorry for that accounting error last week which drastically understated their initial needs. My bad." said some Troika representative. Looks like that extension of capital controls (that just got re-extended) will be extended yet again. Why don't they just go ahead and tell the Cypriserfs the truth, capital controls are here to stay - forever or until the banks fail - and we know which of those will come first.

Even CNBS is reporting that The Euro Zone Crisis is Back - On Multiple Fronts. Let me see, if Cyprus is the template then deposit confiscation and capital controls and the forced sale of their gold at depressed prices to the banks and ..... well you get the picture. Now here come Portugal and Ireland - two more 105 pound armyless weaklings to pick on. Slovenia is apparently next on the bail-in bonanza.

Anyway, none of that matters here in the US. No austerity or capital controls here thank goodness (/s). The stock market is roaring and earnings season is off to a spectacular start. Now I'm not sure how our business leaders pull it off quarter after quarter with stunning data points like producer prices falling but retail sales falling the worst in months, but more power to them (even more /s). It's all good man. I'm sure glad that CPI is in line and there is no inflation out there (continuing the /s).

OK, so we've got everyone and their brother on a top call? Not so fast some of the "experts" are on this new bull market breakout binge. So what is it? Whether it is a new bull market or a top does not matter. The markets are an illusion. They are the distraction to reality. They are 100% manipulated BS. You absolutely must to get this thru your head. Did you not register all the /s' above? Who gives a shit what the markets do? They are inconsequential to where we are headed. That said, and since we all need some sort of mundane thing to keep us entertained till everything goes BOOM!, let's look at some charts -

SPX Daily - There was a time that (even on a Friday) This would be a point I would be shorting with both hands. Not today as I never swing over weekends and don't trust the markets. The daily chart is either set up here for a major failure of more irrational overbought exuberance. See the divergence diagonals? Note the price increase yet now the indicators are hitting their near term resistance lines. This is a nasty set up for failure. That said, what used to be is not any longer. this is just the type of point they have raped recently leaving the technicians wadding up and throwing away another set of charts in utter disbelief. This is the type of point I have had to ignore several times already in my search for the next top. 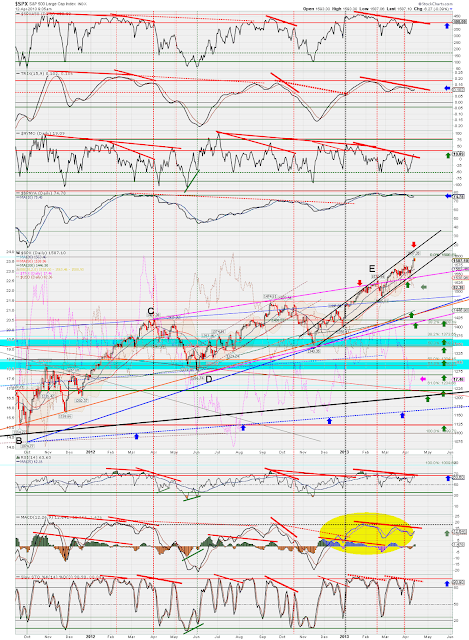 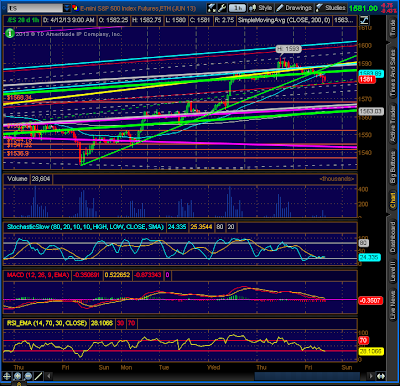 On my disclosure as a distraction to the coming crisis theory - well, this is good, it is a step in the right direction, but I might as well have Maxine Waters riding shotgun. If this is the best my crowd could get to represent them, my hopes are seriously dwindling. Actually, they may be going in reverse. Read more about the Citizens For Disclosure meeting here.

Enjoy Master's weekend. I highly suggest that you at least take in the back nine on Sunday even if you are not a golf fan. This is possibly the most remarkable last quarter of a sporting event all year (and the raw beauty of Augusta National is breathtaking).

As usual more to come below. Back to back days of over 300 comments is an STB record. The crowd activity is certainly signifying something. Lots of noobs coming out of the closet providing some excellent new commentary adding to the already insightful community. Many thanks to all for their participation.