Round trippin. At least we did not have to get felt up and abused by the TSA on this journey. The SPX rotated positions from on to off to on again. Since the April 05 lows, price has been in a rather violent and large consolidation phase. Ranging from the euphoric nosebleed 1597 to the fear ridden 1535 low, the markets are beginning to show some wear and tear. And no, this is not a chart of the fall from the '07 top to now although it looks very similar. 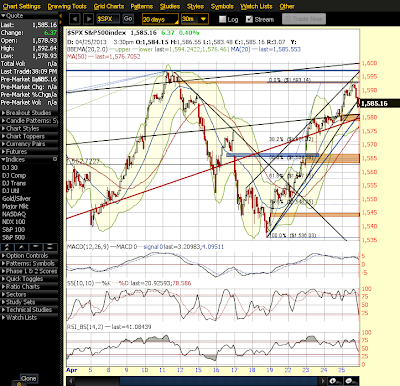 This is not kind and not meant to belittle anyone or any incident, but the markets resemble a Bangladesh factory. Lots of cracks and unsafe working conditions, but everyone is forced in to work every morning regardless of the situation. Just like with this factory, a collapse will happen soon enough, and the bosses and owners will be nowhere to be found in the aftermath.

Please remember all those affected in the horrific incidents in Bangladesh. One hates to draw parallels at times, but sometimes it takes a disaster to shine the light where no one has been looking. In this case you see the global system literally crumbling from ground up. The poorest of the poor working to survive in dreadful and unsafe conditions so we can have affordable clothing.

Well, that's the MSM spin. More like working so Apple, Walmart and the Targets of the world can sell their wares at the best possible margins in order to satisfy Wall Street, and so the corporate overlords can make millions. Greed rules. He who dies with the most toys, no matter how many people are left dead or in ruins in their wake, wins. The MSM will not dare spin it that way though. Who supplies all those advertising dollars?

The cycle and systems are breaking down. The inequality is getting far to dispersed. The wealth distribution has turned into wealth confiscation, and that has spread up the chain from the poor and is now bleeding into the middle class. The 1% are starting to literally drain the support system dry. A reset is coming. you can see the signs everywhere. How many more factories have to collapse, how many more jobs have to be lost, how many more children have to starve, how many more bank accounts have to be confiscated and controlled before we've all had enough and revolt against the governments and corporate overlords?

And what will happen to the markets when either A) we revolt or B) they've put us all in the poor house? Well, we've already reached B, so I figure A will follow soon enough.

Update:  - And when grief turns to rage -

Minis 4hrs - Blue channel up into resistance just under the round number 1600 and just shy of an official double top. Indicators on the lower time frame charts are starting to set some rather nasty looking negative divergences. What those mean these days is anyone's guess. 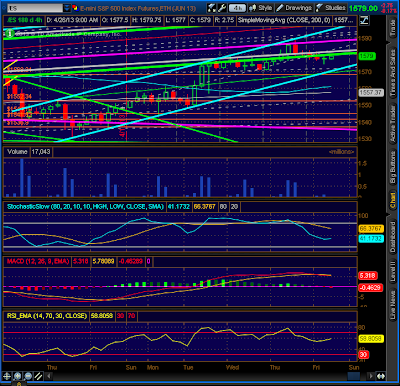 Minis 15m - A more detailed look at the channel and support/resistance. 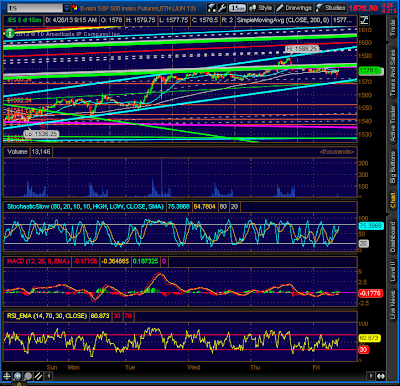 The two P's folks, patience and prepare. Like TD said in  the NANEX flash crash post earlier this week, did you have a chance to sell into that 150 plunge? Don't think so, and when this thing begins to let go you may wish you were not so greedy yourself.