Not sure how to address everything that is going down at the moment. Again, first and foremost, STB readers need to say prayers for all those in harms way or affected via the horrific tragedies of this past week.

The Marathon and plant explosions combined with all the other bomb scares,  anthrax mailings, empty packages and trucks, communication disruptions at a time when the gold market was hijacked following the Cyprus crime and the markets are apparently topping is way too much of a coincidence for me. You need to read Is Someone Trying To Crate Nationwide Panic ...Like in 2001 from WB (and that was written before the explosion last night).

False flag or intervention from above or below, this globe is in meltdown mode. Mass animal deaths and bird flu in China, increases in multitude and magnitude of earthquakes, global flooding, drought and starvation, plague like spawns, sinkholes everywhere; this is more than just increased coverage due to modern media. When mother nature gets in on the act, you best wake up and pay attention. (and I did not even bother to get into all the solar issues that abound)

Governments are out of control and no longer serve their constituents. They serve the banking overlords. They serve the banks that feed off of our misery and conflict. We're in a time of three active types of warfare are going on at once. Currency, electronic and ground wars are all being fought right now. The banks make money via financing both sides of every conflict and thru the inflation and trade in specific items like oil and weapons used to fight the wars. They win coming and going and have done it for centuries.

Sadly the most important war we Americans face is the one with our government. The war of disinformation. I've been telling you the markets were no more than a distraction to reality for years now. They cover up the rotting carcass that was this once great nation. The market's glory and all time highs covers up the horrific scene of the vulture bankers scurrying to fight over the remaining bits of meat and innards left on America's carcass.

When the market's lose their luster and the veil is drawn back, the Americans are not going to like what they see one bit. When Americans finally remove their self righteous and self serving heads from their backsides to see what's really been happening, all hell is going to break loose. This is exactly why Greenspan said the markets were the most important thing on the planet right now. The markets provide the illusion that all is well when it isn't.

I've warned that the disinfo war was raging and that it would escalate to false flag events. Welcome to the show. I warned yesterday that the Marathon event (FF or not) was the first of many to come and that they would need to increase in magnitude to accomplish the governments goal. Well, it took less than 24 hours for that statement to come to pass. The worst part, they are just beginning. There will be more and larger events to come. (and remember I believe UFO disclosure is coming)

Why? As I have stated, they must galvanize this nation. They must put us in rally mode. They have to get us completely and so centered on nationalism that whatever they ask, we will do "for the country". Folks, this is the greatest setup in global history. The banks are using the government to set us up for the greatest theft of all time - the US retirement system and possibly every dollar in every account in the nation. Total capital control.

Why do you think the gun grab is coming on so hot and heavy all resulting from (although horrific) a few incidents and mainly Sandy Hook and Aurora? Why do you think they have shut off the flow of ammunition to the nation? Wake up people. For the crime they want to commit (think Cyprus on steroids times 1,000), we can not be armed.

Is there a bright side? The failure yesterday of the gun legislation was possibly the greatest victory for the American public since the revolutionary war. This leaves a slight ray of hope that those in DC are not totally corrupt and do have some sort of American spirit left in them (well, slightly over half of them). That's a stupid statement cause you know every vote is bought and paid for, but is sounded good. Still, the gun laws were not passed. The best part? You know it pissed off the Manchurian Manbat to no end.

The other bright side? This false flag war will not only galvanize us as a nation but it will backfire on the powers that be and become the wake up call we so dearly need. I believe we're about to be woken up and not put further to sleep.

Folks if you can't see it coming you really need to take that bold step and start to believe. Believe that the "it can't happen here" can happen here. The bowling ball of totalitarianism is headed down the lane for a perfect strike if we don't stop them now. If you want to live under fascist socialist rule, be my guest, but I'm not standing for it. I'm not going to let them take this nation over without some sort of fight. Obama is not going to become our Putin.

I''m tired of being called a terrorist in my own country cause I have more than seven days of food in my home. I'm tired of surveillance of STB by the handles and various cyber attacks on my freedom of speech. I'm tired of having my constitutional rights raped and pillaged by a government that serves special interest groups over its citizens.

TSA, DHS, FBI, CIA, black ops you name it - they don't protect you they imprison you. The Army does not fight wars to protect you. It fights wars for Exxon, BP and to protect the opium trade so the laundered money can flow thru our insolvent banks. I'm tired of returning veterans being labeled terrorists. I'm tired of a lot of damn things.

It is time for us to come together and unite as a nation against out government and take our nation back. If we truly had our government in its original form of and for the people and not of and for the special interests - we can make this nation great again.

What is the best way to fight and take to country back? Simple, remove every dollar you have from the banks and they will all collapse. Like Max Keiser has been trying to get us all to do for years - take your money and buy physical - they will crumble in an instant. Simple and we win.

Now, all that said there will be no easy way out of the crisis. Pain, hardship and suffering will come. This may be even far worse if we decide to win. That will be the option. Like when Moses came down from the Mount with the Ten Commandments and found the Israelites had reverted to revelry and worshiping idol gods - We will be offered an easy path - the banksters path and succumb to their terrorism (evil) - or we can choose to retain our freedoms and suffer for 40 years in the desert (good). Either way it's gonna truly suck, but at least one way we retain our dignity and honor everything our forefathers fought for. The choice is yours.

I'm too pissed to discuss the BS about the markets today - if something happens I'll cover it. As I have said it is a manipulated farce that only survives to fool you and distract you from reality.

Minis 60m - Minis support is at 1540 and then there more from 1511 to 00. The markets are set to crumble. the gold fiasco this week was a precursor to more desperate moves to come from the CB's. Remain patient. We're close. 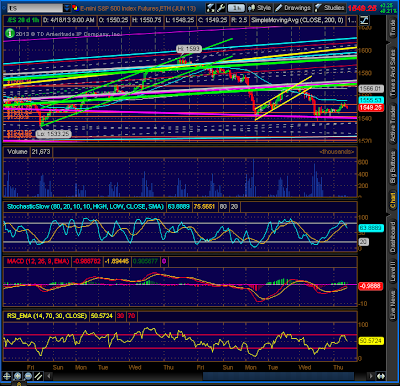 SPX Monthly - We need a monthly reversal candle and any close sub 1514 will get that - you can count on the Fed to fight that at all cost. Yes, I really like that red target box and at this time believe it could be conservative - if we make it to that point there will be nothing left of the markets and they themselves may not survive. 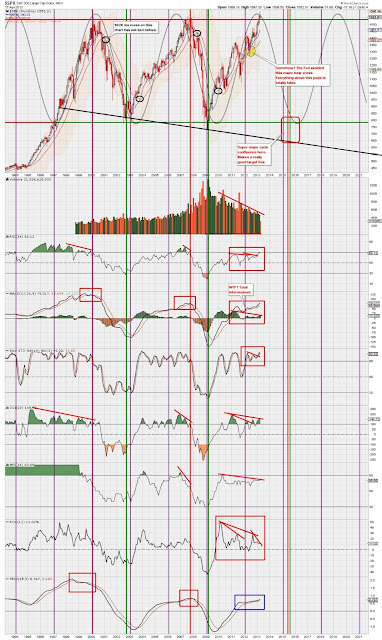 Everyone please wish LS2 a happy 11th birthday! I will be out today for a while enjoying this moment with my 11 year old. Cupcakes at school and off to buy them BOTH a new gold club. I want them to enjoy life while they still can. You all know my greatest pain comes from what this and former administrations have done to ruin my child's future. That rant is yet to come and might be to one that finally gets me into a FEMA camp.