Well, I've finally seen someone respectable come close to predicting what I think the markets will do. With 450 SPX, 10k gold and negative 10yr reates Albert Edwards Bleak Crystal Ball comes awfully close but still may not be dire enough. I've had a SPX 550 target in Sept 2015 on the books for some time now, but that's just a technical point in time. What was Albert's mistake? Assuming there will still be a stock market after the crash.

Crazy talk! Crazy I tell you. Nope, just weighing all the possibilities. First let me ask, do we have a market now? Well .... do we? Really? I see a market there. I see companies listed and prices going up (not down of course). The MSM and CNBSers tell me all is well and to get into the markets. What's not real about it?

The following picture from NANEX and ZH tells you exactly, precisely what is not real about the market.

"Presented with little comment aside to note that based on a tweet, the 'deeply liquid' US equity market collapsed instantaneously as all those liquidity-providing 'algos' jumped ship... 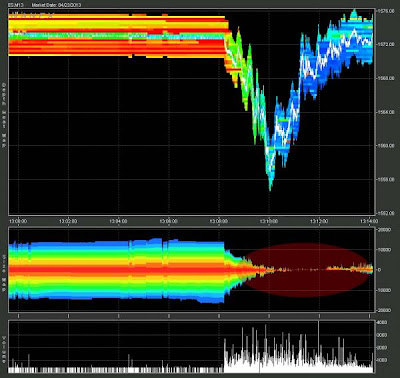 And TD goes on to note,

"The good news, if indeed this was merely a test for "the big one", is that everyone managed to sell ahead of everyone else. Right?"

Folks, the only thing that is real about this market are the central bank's unregulated front running HFT algo bots trading the $85 billion per month Fed influx that provide thousands of false sub second market lifting bids that are designed to get you to pay more for every share traded. What the chart above proves is that when the machines leave the market, there is no market anymore.

So, what happens when (not if) the central banks fail and go bankrupt and the machines are turned off? That is a multi-tiered trick question that I do not have time to discuss, but you get the picture. Let me rephrase that, what happens when the global financial system collapses? Ooops, another dodgy question. Do you get where I am headed?

More hogwash you say? Balderdash! The global financial system will not fail and all the global conglomerates will be just fine. (Here I/we jump off to the deep end) Well maybe, but what if the global government structure changes? Care to tell me how much influence special interest groups hold over our government at this time? Who controls who? (I'm about to go all Robo-Cop/Running Man on you)

One word rules the world and controls everything, greed. So what if the end game is they want the shareholders out of the way and want to control it all? Will there need to be a market then? What if after the crash and everything is gone, governments decide to nationalize everything. The Manchurian Manbat just recently updated several presidential directives allowing him to nationalize anything at his whim (he removed the part about national security and replaced that with basically "when he feels like it"). Will there be a need for a market then?

Bottom line is your jobs will be safe, but instead of working for say KO you will be working for the USSA or something like that. You wages will be "donated" to the system and you will receive everything you need to survive from "them". This will all happen after the global pandemic wipes out about one third of the world's population (think bird flu but 1,000 times worse) and balances sustainability and productivity. Wars? After the next one there will be no need for a military anymore and the forces and weapons will be turned on the citizens of the earth. Again, I've gone all Robo Cop on you. Hey, it could be worse. A lot worse. I could have gone Mad Max. In either case - there will not be a need for a market.

I hope you enjoyed that rosy trip into the future. Maybe now you may grasp why the gold rush is on. Owning paper fiat or digital 1's and 0's won't do you much good in that future will it? But believe what you will. It is a hard line to cross. Hey, at one time it was considered lunacy to even contemplate the largest market in the universe could be rigged, but here we are today. Truth stranger than fiction?

SPX Monthly - Here is that SPX 550 target I mentioned above. A bottom in 2016 might be a bit conservative. When this thing goes, it is gonna go. None of us have ever witnessed true market capitulation like what's coming. Everyone will be headed for the gates at the same time, and I mean everyone. Like TD said above, and everyone had a chance to get out the other day on that mini flash crash, right? Remember I have long predicted at least two market closures. I have a feeling I understated/missed that one by a mile. Put it this way, there will be no buyers at some point. 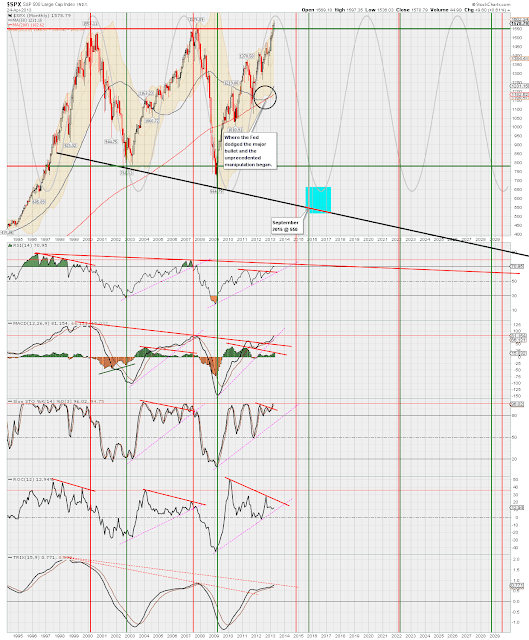 SPX Weekly 13/34 - Don't be fooled by this recent run. There may even be another if you look closely at the last two major tops that each had one last bull trap in them. This chart tells the real story about how weak, overbought and unrealistic this market truly is. Bout time for that ADX to explode again. 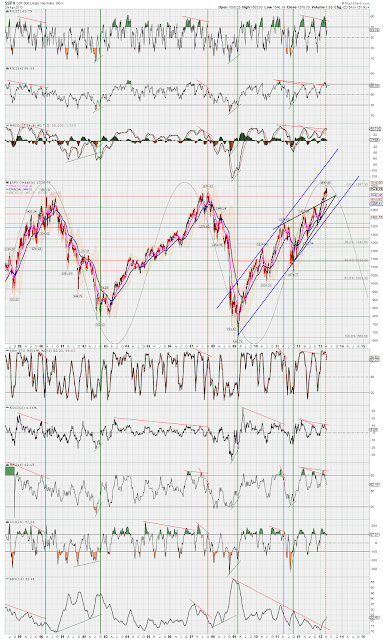 Minis 60m - Still battling old resistance diagonals just under blue channel resistance. If this 1578 level goes, then you are looking at 1590, and then of course 1600. Do they have the scent of that bogey again? To the downside (just for shits and giggles) you have a possible STB point near 1567 tomorrow. 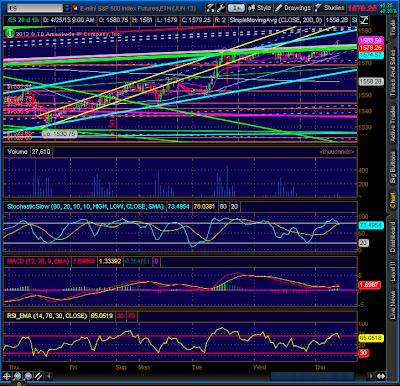 Patience and prepare. The two P's. Congratulations STB, you now have a new daily mantra. The twp P's, I like that.