What's wrong with the following statement?

"Our bias is to expect further declines in gold prices on the combination of continued ETF outflows as conviction in holding gold continues to wane as well as our economists’ forecast for a reacceleration in US growth later this year."

That's from the Goldman Closes Gold Short post on Zero Hedge. As we like to say do as they do not as they say. Maybe Bloomberg still allows Big Gulps to be served at the GS commissary? Don't know, but whatever they are smoking (hydro, synthetic, imported ..) it must be some good shit laced with some serious hallucinogens. I guess that's what it takes when you can apparently lie to your customer base time and time again for your benefit over theirs. Ha! That sounds like our  government.

Anyway, last time I checked the demand for gold has only increased after the fraud committed to the market last week. I suggest you read Aftershock on ZH as well. There the question is asked, "If the FBI can track down two homicidal Chechen nobodies inside of forty-eight hours from their Boston bombing caper, you kind of wonder how come the Bureau can’t detect the odor of racketeering, insider trading, and wire fraud in this month’s orchestrated smackdown of the gold futures markets, including the parts played by the Federal reserve, one or more too-big-to-fail banks, self-interested big money players such as George Soros, slumbering regulators at the Commodities Futures Trading Commission, and tractable editors at The Wall Street Journal and The New York Times? "

TBTJ folks - To Big To Jail is alive and well, and as long as it is all you can expect is more of the same from the TBTF's. It won't be long till there is no gold left to buy on the street, street gold will have a 50% premium to paper, of course at that point they will have crushed the miners to oblivion and GS will still be promoting their short thesis. Maybe the new STB mantra should be "what doesn't make any sense makes perfect sense"? Ah, the new normal.

And to give you that real warm and fuzzy feeling this morning (as if this post has not been rosy enough!) I suggest you read Boston Terror Narrative Falling Apart from Washington's blog and watch the police perform "voluntary" raids on homes in Watertown. Then you need to read this from infowars.com coverring unwarranted searches and the end of the 4th Amendment. Is it any wonder they would not let the press into cover the search? Welcome to your future folks. Marshall law is here. This should make you sick. Wake up.

On to the markets - Not really sure why I continue to cover the markets and chart the farce? Call me a creature of habit and a believer in reality.

Daily SPX - 50dma and lower BB caught the fall after red channel support gave way. Now the backtest of the channel support and the point where it should all fall apart. Ah, several years ago and in a per-manipulated market that would have been a layup but not today. There once was a time where I would have bet the mortgage on that target box (in price not time) with the first 1464 and second 1410 targets. Not any more.

Minis 60m - 1568 is first resistance after yellow channel support backtest then the major resistance starts to come in near 1577. 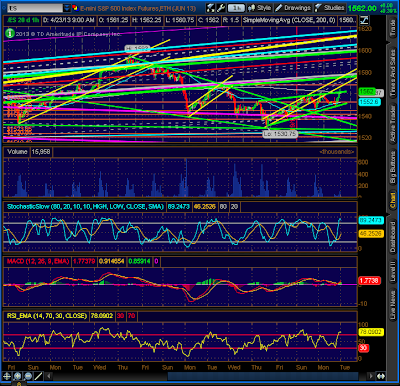 Minis 15m - Overthrowing the wedge? Not sure if you can count on that or not no matter how good it looks. Remember 1570 makes a nice symmetrical top for a possible RS scenario. Higher lows and higher highs are not a good sign for the bearskis. 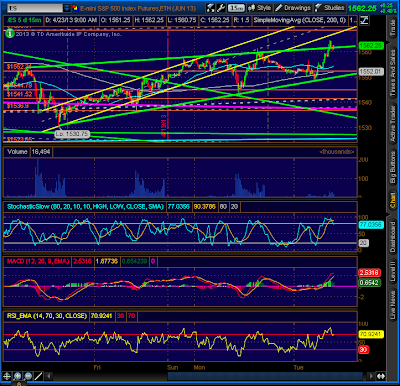 Patience - I know, you are sick of hearing that. The catalyst has come and now we await the event. It must be financial in nature. It will come from the EU I believe. The next bail-in should do it. We're close. Everything is crumbling. The markets are all they have left to give hope and the illusion that all is well. They will protect price at all cost (as they have), so expect even more irrational price action in the mean time.

As usual more charts and analysis below from me, and the excellent commentary from the followers is always insightful, intriguing and entertaining.