I suggest you read Overnight Sentiment: Keep ignoring Fundamentals, Keep Buying at ZH. Like we were discussing in the comments section yesterday, the market's rise is proportionate to or a function of the economy's drift. The markets go up covering up the rot and decay of the economy underneath  Note that the inverse never happens here.

If you have not paid attention over the past several years, the debt crisis is out of control, the banks and corporations have hijacked the governments of the globe and are on their way to taking over everything not nailed down. The crisis has escalated to a point where direct confiscation of your assets is now becoming the template for the banks future livelihood.

Right now governments around the globe are writing legislation that allows the governments and banks to seize your assets and use them as they wish (pay their debt). So, in essence, what's your's is theirs. They have been stealing real estate for years now, but that does not spend like cash. The crisis has reached a point where they are confiscating bank savings to save the banks.

I highly suggest you (especially the Canadians) watch - Bail-in: the Birth of the New financial Order

I have written at length recently and in the past about the future confiscation of the $19 trillion retirement plan system. The privatization of the Social Security Trust (or the IOU's that are left in the trust) is squarely in their sights. It appears that every account on the globe, savings, retirement, investment, trust or whatever are now in jeopardy of being confiscated. If you don't think the foreclosure crisis, the LIBOR event, the O-MFG and PPG events and larger thefts like the one in Cyprus are precursor events to even larger ones, wake up.

The sad part is that even if they take every dollar their system will still collapse. We're facing true global financial meltdown. As I have warned you for years, get out of the dollar and away from the banks. If you think financial controls are not in place here in the US, go and try to withdraw a sum over $5000 and see if you can get it.

The dollar will lose its reserve currency status and will continue to be devalued, so why hold dollars? Like I've said for years, gold, silver, guns, ammo, food, water filters, and other items will be far more valuable one day to you and your family than your current dollar denominated accounts.

If you can't see this coming you are sorely mistaken. I'll ask, how many times can Cyprus go to the well? What's going to happen to their system the next time they need a bail-in and the next and the next cause they will? If you want to take control the only way to do it is to take your deposits and accounts away from the banks. This will kill the system and allow us to take back the globe from those in power.

Patience. They can't fight this crisis forever. They are at the end of their fractalized hyper rehypothecated monetized ropes. The move yesterday in the markets was an attempt to keep you in the markets where you believe your money is growing, safe and sound in their institutions. The move yesterday was an attempt to keep your eyes on the right hand while their left hand is doing the magic. The crisis is at the end stage; blatant, unhindered and legalized theft.

Minis 60m - Like I've stated, the charts matter little now, until they do. They will tell the ultimate top, but it will be my "event" that finally signals the top. I believe we will all clearly see this moment. Yesterday morning I said, "this thing could move to 85 or 45 in the blink of an eye." Well, it moved to 85 in the blink of an eye. 85 is major resistance and the next above is right at 1600. I;m not sure if they have the scant of the 1600 round number, but you have to know it is in their sights. What better for those managing the farce to take this uncharted level down? I'll tell you this, the gaping supportless hole under price here is magnificent. When this turns, it will generate a cry so loud it will be heard throughout the solar system. 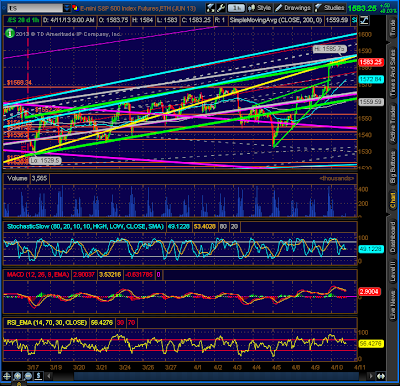 SPX Monthly - Let the farce roll on. Markets are 100% manipulated and there is nothing you can do about it (except remove all of your funds). They are running out of time and they know it. The markets are supported now via pure manipulation. Nothing is real. For those that chose to stay, you will have to deal with more of the same it appears as the market's illusion that all is well is all they have left. 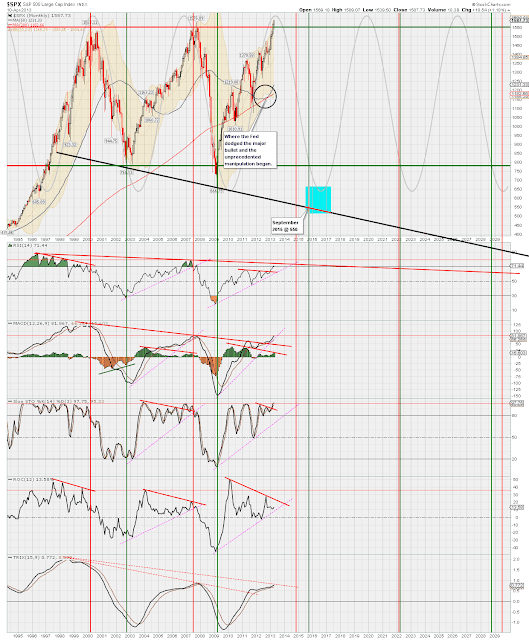 As usual, more to come below. I believe STB set a record yesterday with close to 360 comments. Insightful, witty and well worth the time is the way I describe the comment section. Many thanks to all for sharing the love and knowledge.