The waiting game continues. The rumors and opinions fly, but no one knows for sure what The Bernank is going to pull out of his ass bag of tricks to fool the investing public this time? With the elections so close can he even hint at policy? Well that's probably what he'll do. He's gonna throw out a few ideas and let them ferment in the market place hoping that (as proven over the past year) rhetoric and not actual action will be enough to keep the markets elevated.

I think a big surprise could come in the form of some real socialist type move. Direct stimulus to the sheeple could be a real possibility. This would have controls of course, but something like this may need to come sooner than later as public sentiment is rapidly deteriorating. Is there a better way of shutting up the screaming baby than to give him a treat?

Draghi To Miss Jackson Hole Forum; All Rumors Now To Focus On ECB September 6 Meeting which will be followed closely by the FOMC meeting September 12th. We're stuck in rumor hell for the next two weeks. This is wonderful for the crony capitalists as the markets barring some sort of event or catalyst will have a steady flow of rumors to keep the markets under control.

What you need to know is that the ECB, in order to find some sort of extension before the bottom falls out, is looking to revisit the past and what got us to this point in the first place. "The ECB, backed by the Bank of France, considers a draft version of the liquidity coverage ratio, or LCR, may hamper efforts to combat the euro-area debt crisis by curtailing lending and making it harder for central banks to implement their monetary policies". Remember that, "The LCR was drawn up by the Basel group as part of a package of measures to prevent a repeat of the turmoil that followed the 2008 collapse of Lehman Brothers Holdings Inc. "ECB Said To Urge Weaker Basel Liquidity Rule On Crisis Risks You all know what's happened with Dodd-Frank right? Dodd what? Exactly.

They have no bullets left. Germany is pissed and does not want to go all Wiemar again, Spain, France, Greece and Portugal are all in dire straits and to fix the problem they now want to implement the same policies that got us to this point in the first place. All is well. Move along.

Time and a catalyst are all that's left. They will extend and pretend till something breaks. Insolvent central banks can not continue to print to lend to insolvent banks who in turn lend to insolvent governments who in turn repay the insolvent central banks. This Ponzi can not continue forever especially with the economies not cooperating. This will end very badly. My thought are the next time you hear anyone discussing the possibility of a CDS default, that will be your key for the major reversal.

Till that time they will protect asset levels at all costs. So much for the markets cooperating and generating enough fear to allow the Fed to ease without being persecuted for it (although the economy demands it). I'm not really sure why we even give a flip. When they ease all they do is give the banks money so the governments can repay their tab at the Fed. None if very little of these funds ever reaches the public sector.

You all know I hate discussing BS and that's all you hear from the elite as they try and kick the can as far as possible before the end occurs. Unsustainable? You betcha! In the US an income of $2t with expenses annually of $3t, debt soaring above $16t and an unfunded liability tab of $122t - you do the math. We are not alone. All the PIIGS are basically in the same boat, add China, Japan and several other nations to the equation and the picture should come clear to those that can do basic math. Time and a catalyst folks, and when it hits you better be prepared.

No magic bullets in the charts, they are simply ready for the turn and all we need now is for the central planners to cooperate. Their window is narrowing between now, the election and the holiday season. They better get on with it or else.

Daily SPX - Why are the markets not running for cover? I think we covered that above. Central Planning is a wonderful thing if you are a Keynesian idiot. Again, patience, time and a catalyst. The markets are set for a massive disruption. A sell the news event would be OK, but for a real fall we need an agitator. 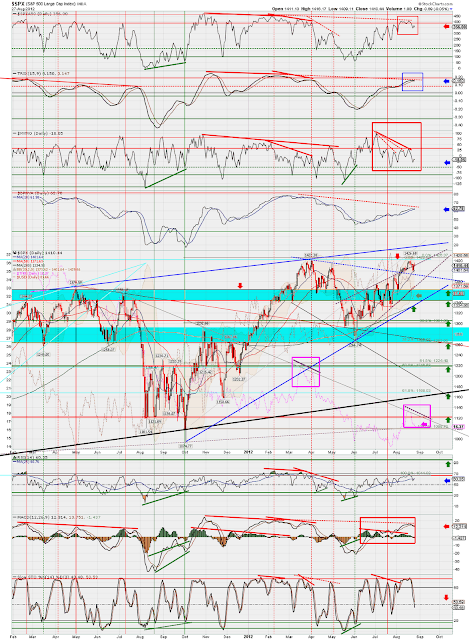 Minis 60m - The heavy falling diagonal is the upper market resistance line off the 2007 and March tops. That's a big deal, and it is no wonder why the markets are stalling here after setting a double top in the 1420 range. Why are things not falling apart given the divergences on the daily thru monthly charts? Go back to reading the above if you still don't get it. Raw, centrally planned manipulation folks. That is all that is supporting this market. Where price is now is a good STB point (sorry I missed this one and did not really see it till yesterday. There are three support diagonals and two s/r lines all intersecting with the thick blue upper resistance here, and price is huddling all around that point now. If this fails I think 1295 will be an easy first target where big red (the old upper resistance) will come back into play. 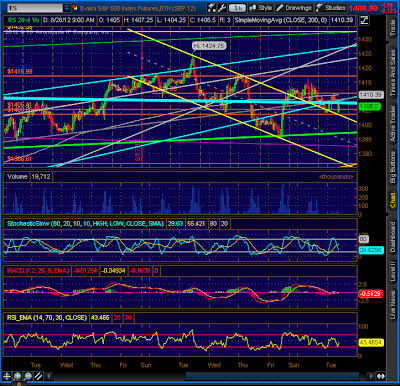 Calm before the storm folks, be patient and prepare. It is coming. The only question is can we survive a few more Cat 1's before the Cat 5 comes rolling in to take everything out?