FOMC day, I usually crow about these and point to major ones months in advance as a harbinger or some sort of major event that would move the markets one way or the other. I'm not saying that these meetings are not important or can't move markets anymore, they can. They are just not worth speculating around anymore as the Fed simply Xeroxes the last meeting notes, changes the date, extends ZIRP and promises that they have the tool for the job. Of course the markets buy whatever he's selling as he's cornered the market on hopium.

As most by know now, as I have been writing since spring of last year, the markets are not at a level where easing is apparently needed. The economy on the other hand desperately needs an infusion. So what is the Fed to do? I have been promoting the idea of a manufactured crash for well over a year now. Along with that came many questions, mainly, can they control a major move south and not let it get out of control. Another question, will they just say screw it and ease here? STB was also ahead of the curve on the diminishing effects of QE on the markets. This means they have pushed the lies and fraud to the limit.

The main reason I've stopped harping on some of this stuff are few. Basically the Fed controls everything and they will do whatever the heck they want. There is nothing free or normal about the market anymore. Over three years ago I made one really magical prediction, and that was that it would take an "event" so large that it would be the one thing that would end the nightmare. It would be so large that it would be out of the central planner's control. It is becoming more apparent every day that this "event" is the only thing that will end this charade. Till then, all we can do is wait and watch the elite scum destroy this nation one additional dollar at a time.

I believe we are experiencing a "blow off top" here. That is an exasperated move at the end of a run, the last bull trap, where price moves to extreme levels against all odds. Technically these still generate turns, but not like they would have in years past. Why? The never ending promise of QE of course. These days markets correct, but never enough to really make a difference or to balance them with underlying economic conditions. They move south just enough to get the shorts all lined up for a mini slaughter which assists the Fed in lifting the markets without having to add much additional liquidity.

One of these days the shorts will get their just rewards, but till then all we can do is play their game. I believe my "event" is close. Global tensions are at extreme levels and the financial crisis worsens every day. The dream that they can fix the problems is perpetuated by the controlled MSM while behind the scenes the politicians and bankers scramble to generate the next "solution" (plan number 20 or so now I believe). All you can do is let the game play out at this point.

Investing in this market is purely idiotic at this point. Getting your funds out of the market and out of dollars into hard assets is probably the most prudent thing one can do right now. I'm not saying there are not some spectacular opportunities for those left in the markets (the last crash should be a great moneymaker). I'm saying that the dollar will die. It will lose its reserve currency status, and when that happens, you better have reallocated a large portion of your assets to something real or physical (like gold or silver).

My BTFD/STFR chart says run for the hills - I believe it. This run will not last much longer and if it does it will only be generating better entries for the shorts. 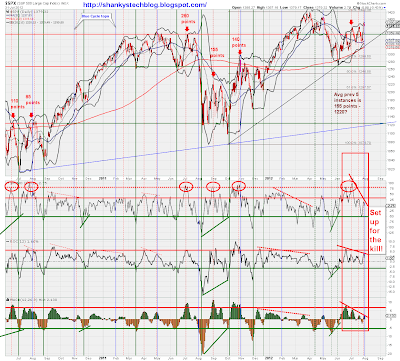 Minis 60m - Backtesting the (green) neckline of the HnS from April. This should be it. Above 1375 is no man's land. Blue, yellow and purple rising diagonals below are the three major supports along with 1341. 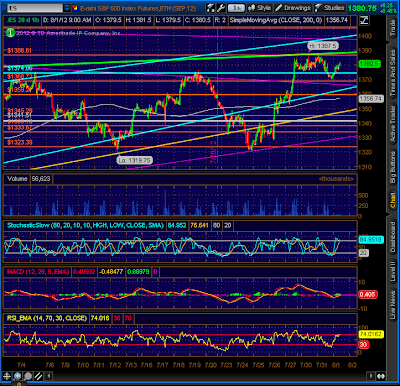 As usual, more charts and intraday analysis in the commentary below.