Washington's blog hints at our future and possibly the only true solution to the current crisis in Will We Have to Wait for a 21st Century Peasants’ Revolt Before Seeing Any Real Change? I have often wondered (and espoused upon many times) why we are not in the streets yet? I concur that it will take a total revolt to take the system back from this rogue government. The easy route would be a military coup, but that ain't happening. Until we get off our lazy asses, awaken from our self absorbed slumber and see the corrupt system for what it is, the situation will only continue to get worse.

The crony capitalist cabal run by the central banks controls everything. This nightmare can only end in one of two ways, either we destroy the banks or they destroy themselves. I think the latter will be the case. Till then we awaken every morning to the nightmare where every ounce of your financial well being can be destroyed  or stolen (legally or not) by a simple keystroke from the banking elite.

They are stealing everything folks, right from under our noses and we are not doing one damn things to stop it. It will be our duty to rise up if we want to remain free and control our destiny. The sooner the better as every day they steal a little more freedom and clamp down. If you can not see this, I am sorry. This is reality and it appears that revolt will be the only way back to where we want and need to be. If you can't see that they are preparing for total civil unrest by their rapidly expanding police state and the destruction of the Constitution, you need to wake the heck up.


Extend and pretend, the closer to death the better, the worse things get the more the market goes up, welcome to the upside down world of the 21st century markets. Nothing is real anymore and the markets are more dangerous now than ever before. I screamed loudly last week that I believe we have entered and unprecedented period of manipulation. Open, raw, in your face, they don't care, legal or not, blatant, disgusting open market manipulation has arrived. They used to try and conceal this, but as the situation nears DEFCON 1 they are upping the stakes and showing just how desperate they are to save the system that has generated more wealth for the elites than any time in history.

If I thought the SPX cash top near 1390 was a blow off top, then what the heck is this move? Right on cue, they drive price higher in the face of deteriorating global everything. What is bad is good and what is good is OK. They still hold out hope that further expansion of debt will bring a miracle solution. So the next round of printing commences even after they had sworn to stop it.

My confusion about the charts a month ago was warranted. The BP, CPC and SPXA50 were way out of whack compared to what the underlying indicators were saying. Now, everything is starting to come together. BP is setting the worst divergence in years, SPXA50 is almost at a topping point and CPC is just about at a sell level. Add to all that my BTFD/STFR chart is indicating the bottom is about to drop out. 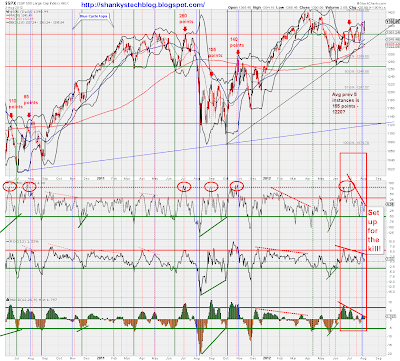 SPX 60m - Of course they ramp it into this sell setup. 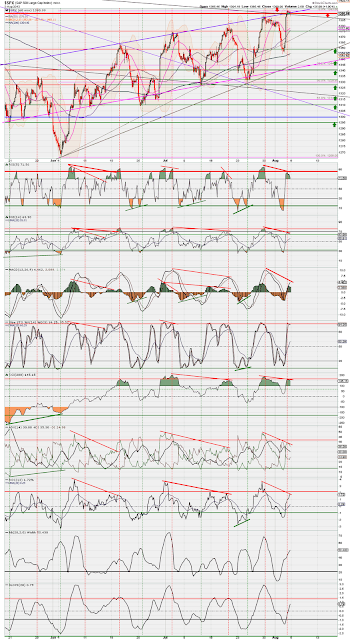 Minis Daily - Upper (yellow) resistance is trying to crack while price backtests the (white) neckline from the April HnS formation. There are now three wedge support possibilities for this current formation (green, yellow and pink). 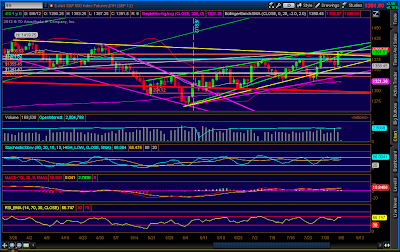 How far can they push price up in the face of total financial annihilation? Who the heck knows? As I have been saying in almost every post since last December, follow the Fed. It is all you can do. The markets are more dangerous now than ever with blatant intervention coming at all the wrong times (for the bears). Expect this to continue as they ruling cabal becomes more desperate. I still recommend gangsta style trading, in and out scalps, take your profits long or short and get the hell out. Don't fall in love with any one side or position too long as you will get your face ripped off and profits stolen. Scalp the rips and dips and get the hell out.

Most regular readers know that since the beginning of the blog my best prognostication of all has been that it will take an "event" out of "their" control to end this mess once and for all. Until that exogenous event happens, we will continue to wake up in the same nightmare over and over again.